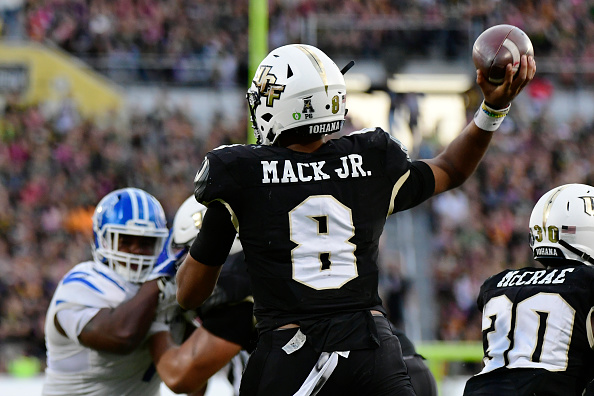 Strengths –  LSU will look to overwhelm the Knights with a heavy running attack. Chewing up as much clock as they can, and hampering what the Knights like to do. Which is taking full advantage of the infamous offensive attack of theirs.

They certainly have the depth at the running back position to make that strategy work. With guys like Nick Brossette, Clyde Edwards-Helaire, and Joe Burrows. Between the three of them, they have 28 rushing touchdowns. The Knights will certainly have their hands full, as its certainly a pick your poison type of scenario.

The wide receiver trio is led by Justin Jefferson, he was by far their top threat through the air. He had 500 more yards than the next guy on the totem pole, with 788 yards and four touchdowns. However, the depth is somewhat decent as they have 6 guys that have over two hundred yards and at least one touchdown.

Weaknesses – The Tigers will be going into this Bowl, missing a number of players. Among the absentee’s are their two starting corners. All-American Greedy Williams is out after electing to skip the game to focus on the 2019 NFL Draft.

As well as Kristian Fulton, Fulton underwent surgery on the ankle he injured against Arkansas. LSU’s pass defense ranked 43rd nationally with 206.8 yards allowed per game. LSU will rely on a true patchwork secondary, including sophomore defensive end Glen Logan. Facing a Central Florida squad, which has the nation’s No. 30-ranked passing offense with 268.9 passing yards per game. We should expect the Knights to test that very short handed pass defense quite frequently.

Burrows did not have a great season tossing the football, passing for 2,500 yards, 12 touchdowns, and four picks. He improved as the Tigers went deeper in the season, completing at least 65 percent in LSU’s final three games. He’ll look to use his feet quite a bit in this one.

Strengths – UCF will be without star quarterback McKenzie Milton. Who passed for 2,663 yards and rushed for 307 yards while totaling 34 offensive touchdowns before getting hurt in the season finale.

Though Darriel Mack Jr. has filled in nicely for UCF against South Florida, racking up 407 total yards and six touchdowns in the AAC Championship game win over Memphis. The Knights’ up-tempo offense hasn’t skipped a beat.

However having just played the one game, Mack is still very green and its anyone’s guess how he will perform against a very shallow but still dangerous LSU defense, regardless of the missing pieces on that Tigers defensive unit, they still have some very solid players that can expose him.  He’ll still need to deal Linebacker Devin White, who has declared but still decided to play in this game. White had 115 tackles and 54 solos on the season.

Hell, be aided by a wide receiver trio of Gabriel Davis, Tre Nixon, and Dredrick Snelson. They will provide a very nice security blanket for the young quarterback. Along with the cast of receivers, they have a very strong ground game. With 1,100-yard rusher Greg McCrae, UCF has five players with at least 300 rushing yards and three players with at least 500 receiving yards.

Weaknesses – On the defensive side of the ball, the picture is rather bleak. They give up more than 20 points per game and 5.3 yards per play. And were among one of the nation’s worst teams against the run, allowing 227.4 yards per game. They are still giving 4.8 yards a carry which currently ranks them in 93rd.

The front seven is easily the team’s biggest weakness. In the AAC Championship, UCF allowed three rushing touchdowns of 60-plus yards. They could be in for a long day if the Tigers can manage to keep that rushing attack on the field.

Titus Davis DE UCF – Davis has nice outside linebacker size along with very nice speed. He’s also good at getting pressure on opposing quarterbacks and is a tough block when using his power. On the season he put up 6.5 sacks to go along with 59 tackles in 2018, and a pair of fumbles.