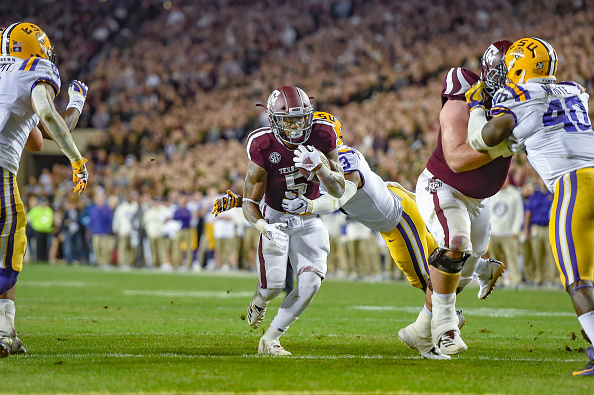 Upstarts N.C. State and Texas A&M will take the field in Jacksonville on Monday night to finish off the 2018 College Football year. Prior to accepting the gig in College Station, Jimbo Fisher beat N.C. State 5 out of 8 times when he was the Florida State head honcho. He’s returning to the state of Florida to face off with a rising program led by coaching sensation Dave Doeren.

The Wolfpack are experiencing coaching changes on offense with Eli Drinkwitz being named the new Appalachian State head man. They’re loaded with NFL talent, but potential first rounder WR Kelvin Harmon and All-ACC LB Germaine Pratt will sit out to focus on the pros. While the Aggies will seek to keep building under Fisher with an instant classic 7 overtime victory playing LSU and their stellar recruiting class incoming.

Both running backs could have field days against the opposing defenses. Gallaspy is strolling in very hot with 350 yards and 7 touchdowns over the last two outings. He was a big part in helping the Wolfpack finish the season 20th in scoring at 35.6 points per game. The main part of the offense though is Ryan Finley. The senior QB threw for 3,789 yards and 24 TDs.

Two squads trending in the right direction for 2019 will collide to end 2018 on the uptick. Williams is tearing apart defenders and needs 170 on the ground to set the all-time Aggie record for rushing yards in a season. Sternberger finished the season 47-804-10 and could be looked at as a solid TE option in the NFL draft in April if he declares. The Aggies top defensive player, Otaro Alaka, is out with a hand injury and will not play. This is a blow to the Texas A&M defense and could come back to bite them.

The Aggies will want to end their bowl losing skid and the Wolfpack will fight to earn their third straight triumph in the postseason. This will be the first time that these two schools have ever met, so fireworks are to be expected in this year’s version of the Gator Bowl.