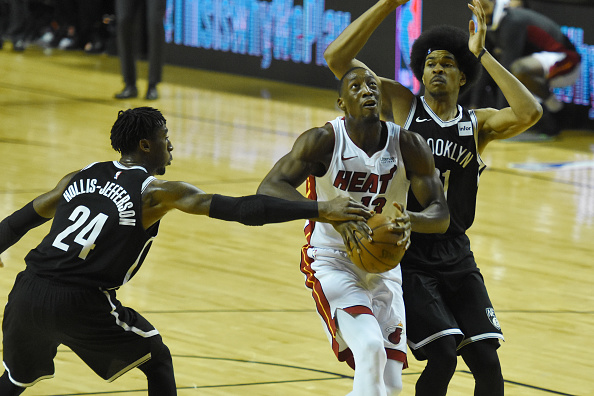 Having a habit of playing down to their competition, the Heat did exactly that in the first half against the NBA-worst Cleveland Cavaliers, who only had nine players available. The Cavs shot 58 percent in the first period and only trailed the Heat by four at halftime. But that quickly changed in the second half when Miami’s defensive intensity picked up. Coming out of halftime, the team immediately went on a 12-4 run to push the lead to 68-56. They then finished the third quarter 82-69 and led by double-digits the rest of the way.

Justise Winslow is indeed better. Since replacing the injured Goran Dragic as the starting point guard, Winslow has excelled in his new role. He has been more controlled and confident in his game. He’s hitting midrange jumpers and taking more threes, but he’s also sinking floaters and finishing around the rim.

And he continued his strong play Friday night vs Cleveland. After a slow start, Winslow got going in the second period by bullying his way to the basket and either finished for himself or found his teammates with some great passes. He finished the night with 24 points, 11 rebounds, and seven assists—three shy of a triple-double. It’s a good thing the Heat signed him to a three-year, $39 million extension (with a team option in the third year) back in October. Because that could end up being a bargain.

Bam provides a spark off the bench

With the Heat playing lethargically in the first half, Spo inserted Bam Adebayo and the game completely changed. The Heat’s backup center was a perfect 8-for-8 from the field for 18 points and nine rebounds in 30 minutes. The 21-year had himself a dunk party with some rim-rocking dunks and also converted on some hook shots and midrange jumpers.

.@Bam1of1 has been on a rampage at the rim tonight! pic.twitter.com/4PcCxyC4ZE

Dion Waiters return is getting closer.

The Heat’s shooting guard was sent to Sioux Falls, South Dakota to practice with the Heat’s G-league team as part of the plan to get him in game shape. Waiters has not played in a game since undergoing ankle surgery on January 22. He will return to Miami on Sunday as the team faces the Minnesota Timberwolves.