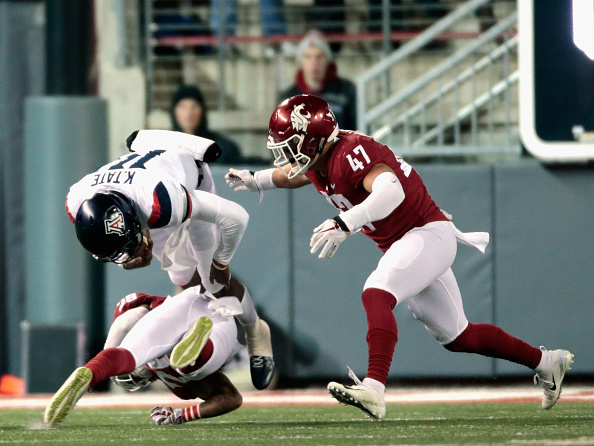 One of the most interesting matchups of the College Bowl season will take place in San Antonio Texas this upcoming Friday at 9 p.m ET. When No. 13 Washington State butts heads with No. 24 Iowa State.  Both teams won seven of their final eight games of the season, though Washington State is coming into this game on a bit of a sour note. A loss in the final regular season game to in-state rival Washington denied them a shot at the Pac-12 title.

Strengths – The Cougars offensive attack is scary good, with weapons everywhere you look. They even managed to put up 40 points against a solid Stanford Cardinal outfit. It all starts with East Carolina transfer Gardner Minshew, who was fantastic from the get-go for the Cougars stringing together eleven straight 300-plus passing games.

Accumulating season passing totals of 433 of 613, 4,477 yards, and 36 TDs.  The nation’s second-leading passer in total passing yards, just 100 yards behind leader Dwayne Haskins. He was awarded Pac-12 player of the year.

Davontavean Martin and Easop Winston lead the Cougars with eight receiving touchdowns apiece. When you consider their top four receivers each had over 500 yards and a combined 20 touchdowns between them, you could certainly make the argument their depth at the wideout position is among the best in the country.

The ground game was shared amongst two players, James Williams and Max Borghi. They were each useful in both rushing and receiving. Williams recorded just over 1,100 yards combined with a monster 16 total touchdowns. Max Borghi had a combined 11 touchdowns, seven were rushing.

Weaknesses – Now it’s true they allowed only 136.6 rushing yards per game this season, limiting teams to 4.0 yards a carry. Washington State has been pretty reliable when it comes to defending the run to be fair. However, in the season finale against the Washington Huskies, the floodgates burst wide open.

Running back Myles Gaskin seems to have bucked the trend of solid run defense, hammering the Cougars for 170 yards on the ground along with 3 touchdowns. To put the icing on the cake, Gaskin went on an 80-yard burst in the 4th quarter.

This may end up being a complete anomaly, but with one of the best running backs, in David Montgomery being their next opponent, we will certainly see if that’s the case and they bury him, or we end up seeing a repeat of the season finale. That rush defense won’t know how to deal with the Iowa State rushing attack. They could end up being in a real pickle, not being able to give that passing attack ample opportunities to help out the offense.

Strengths – Iowa State is a program on the rise under coach Matt Campbell. With an offense led by running back, David Montgomery.  Montgomery finished the year with over 1,000 yards and 12 rushing touchdowns. Averaging 150 yards on the ground in the past two games. He looks to be an early draft choice next spring if he declares.

Hakeem Butler has become a nice weapon through the air. For the season, Butler has 51 catches for 1,126 yards and nine touchdowns. Having taken over the hot seat, from arguably the best ever receiver Iowa State has ever had, in Allen Lazard who leads the Cyclones all-time in career receptions, receiving yards and second and third respectively in single-season receptions.

Butler has taken the role on and performed with flying colors. Tarique Milton the second receiving option, posted just over 400 yards receiving on 34 receptions, with one touchdown snare. Quite a big drop off.

Weaknesses – During the course of the season, Iowa State went through three different starting quarterbacks before Brock Purdy earned the job. He threw for 1,935 yards with 16 touchdowns and only five interceptions as a freshman. Nothing to sneeze at, but the Cougars passing defense is pretty solid in its own right.

I could see him struggling to move the ball at a fair clip in this one, he’ll need to be smart, and just play to his strengths. Trying to compete with one of the top barkers in College Football would be a foolish mistake.

Greg Eisworth Safety ISU – A 4-star recruit out of high school. Eisworth led Iowa State in tackles with 84, including 54 solo tackles. He also had two forced fumbles, which tied for the team lead.

Peyton Pelluer LB WSU – The longest standing Cougar in school history, Peyton Pelluer is playing in his sixth season with Washington State. At 6 feet and 230 pounds, he is a tackling machine. Leading the team in tackles, solo tackles and fourth in sacks with 86,54 and 3.5 respectively. Pelluer is a staple in that Cougar defensive cog.