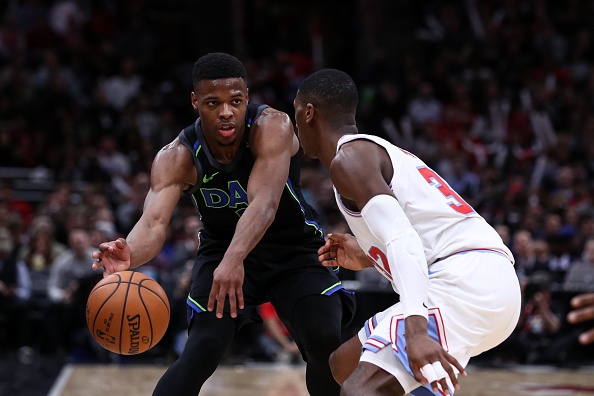 While the Dallas Mavericks deny shopping the second-year guard, team executives around the league expect the Mavs to eventually trade Dennis Smith Jr., according to Marc Stein of The New York Times (h/t Hoopshype).

The Dallas Mavericks insist they are not shopping the second-year guard Dennis Smith Jr., but it’s a situation rival teams are monitoring.

The instant emergence of the Dallas rookie Luka Doncic, combined with longstanding skepticism about Smith’s ability to flourish alongside Doncic in an off-the-ball capacity, has spawned the expectation among many executives that Smith will eventually be moved.

ESPN’s Tim MacMahon later confirmed this report, noting that he’s heard the Mavs have at least tested the market for Smith.

.@TheSteinLine mentions expectation among execs around league that Dennis Smith Jr. will eventually be moved. Mavs tell Steiny that they aren't shopping Smith, but that's semantics. Execs from other teams tell me that Mavs are at least gauging market for their 2017 lotto pick. https://t.co/AVYevoyif0

Smith, the Mavs 2017 first-round draft pick, has been dealing with a lingering wrist injury that has sidelined him for 11 games this season. The 21-year old is averaging 13.0 points, 3.0 rebounds and 4.0 assists per game for the Mavs and shooting 43.7 percent from the field, 35.4 percent from three-point range.
Luka Doncic, on the other hand, has quickly emerged as a star and is currently the front-runner for the Rookie of The Year award. The 19-year-old is averaging 19.0 points, 6.6 rebounds and 4.9 assists while shooting 43.0 percent overall and 36.4 percent from the three-point line.
The Mavs are currently 15-17 on the season, 12th place in the Western Conference standings.