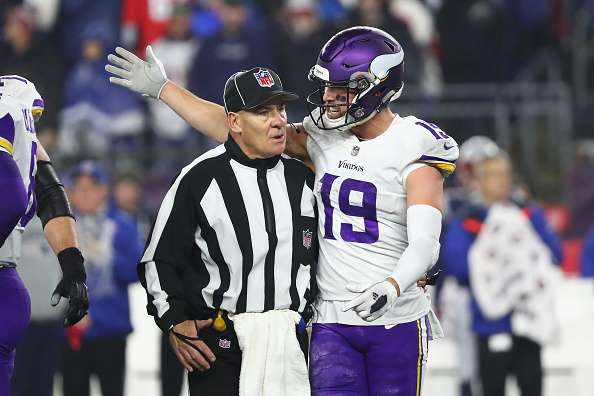 Forget Carmen Sandiego, where in the world is Adam Thielen? My love for Thielen has been well documented this season and rightfully so. He tied Calvin Johnson or the most consecutive 100-yard games in a single season. He had seven straight WR-1 weeks in the first eight games and was averaging 21 fantasy points a game. Through Week 8 he was the number one wide receiver on the year, so what happened?

Since the start of Week 9, he is the wide receiver 26th, that’s a high-end WR-3. He has only averaged 11 fantasy points a game. That’s half the points he was scoring in the first half of the season. He has only had one 100-yard game since Week 9 and his first two weeks in the fantasy playoffs could have potentially cost you your game if you played him. And I’m sure you did, he’s bloody Adam Thielen. But this past week, he had his lowest targets of the season, only two. He was averaging double-digit targets, but to only get two, WTF Minnesota?

In the past three weeks Kirk Cousins hasn’t surpassed 200 yards passing, did he forget how to football? And you would have expected Thielen to have a good game this past week against Miami but 220 yards on the ground shot that idea straight to hell. Is this the new Vikings team? Following the loss to the Chicago Bears, Mike Zimmer voiced his frustration wanting the commit more to running the football.

They paid $84 million dollars to Cousins, are they now wanting to take the ball out of his hands? Are they going to try and take the same approach the Jaguars did with Blake Bortles, where they tried to run the offense through Leonard Fournette? Not really. He still had attempts of 44, 33, and 21 over the past three games. His yards per attempt isn’t much different from the first half to the second half of the season. He just isn’t getting Thielen the ball like he was in the beginning.