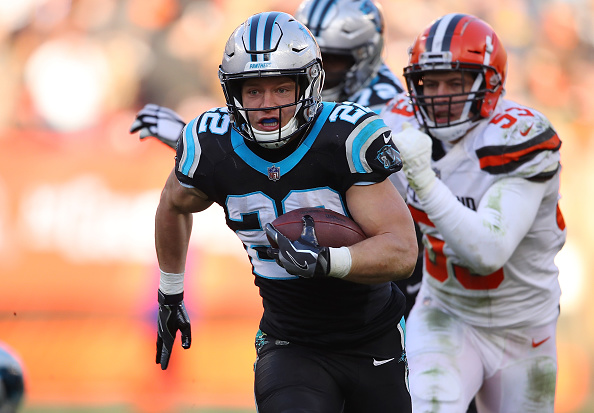 Welcome to championship week! Most leagues will crown their champions at the finale of this weekend. Others will attempt to fight on for a spot in next week’s title tilts. For those who need to win immediately, here are some of week sixteen’s most reliable PPR standouts who can help you win it all.

1. Christian McCaffrey vs. Atlanta-He’s lightning in a bottle and has been unstoppable the past several outings. Should lead his owners to a fantasy triumph even without Cam Newton.

2. Ezekiel Elliott vs. Tampa Bay-Another enticing matchup for this beast. The Cowboys need a win so Zeke will carry the load more and more.

3. Todd Gurley @ Arizona-Gurley galloped through the Cardinals with 3 touchdowns, but only 73 total yards in week two.

4. Nick Chubb vs. Cincinnati-Chubb ripped up the Bengals soft defense for 84 yards on the ground while finding the end zone twice in their earlier season victory at Cincy.

5. Alvin Kamara vs. Pittsburgh-Playoff type battle where Kamara might slash his way around the tested Steelers defenders in the passing game.

6. Dalvin Cook @ Detroit-If the Vikings want in the postseason then they would be smart to ride the back of Cook down the stretch like they did in the Miami blowout.

7. Saquan Barkley @ Indianapolis-The young Giants superstar really let down his owners in week 15. This looks like more of the same playing in Indy with a Colts squad that is peaking at the right time.

8. Joe Mixon @ Cleveland-Mixon has gained over 80 yards rushing in four straight and it started against the Browns while scoring 3 times in the previous two contests.

9. Chris Carson vs. Kansas City-Carson is warming up for the road ahead. Seattle is in must-win now mode with the Chiefs coming to town on Sunday night.

10. Melvin Gordon vs. Baltimore-The Ravens D makes opposing runners work for it, but Gordon is fresh coming off an injury. The Chargers are hunting for the #1 seed in the AFC.

1. Davante Adams @ N.Y. Jets–DeAndre Hopkins just tore up the Jets in Saturday’s showdown. Adams will do the same because Aaron Rodgers loves to target his All-Pro receiver constantly.

2. Michael Thomas vs. Pittsburgh–Drew Brees always spreads the ball around, but Thomas still gets his stats even if they are not worthy of his own stature.

3. DeAndre Hopkins @ Philadelphia-Could be limited with an injury, so keep a watchful eye on this superstar’s status heading into Sunday.

4. Julio Jones @ Carolina-Jones is also on injury watch. With the Panthers seemingly packing it in, Atlanta might be able to push through in Carolina.

5. Amari Cooper vs. Tampa Bay-On paper this is a must-start, although it depends upon which Cooper decides to show up.

6. Antonio Brown @ New Orleans-Matching up with Marshon Lattimore is going to be a must-see matchup and could prove to be a stingy one.

7. T.Y. Hilton vs. N.Y. Giants-Besides his tight ends, Andrew Luck has no one else to throw to on a consistent basis.

8. Julian Edelman vs. Buffalo-9 grabs for 104 yards in the first meeting at Buffalo. Can add some points by rushing it on a couple plays as well.

10. Robert Woods @ Arizona-Is being counted on as Jared Goff‘s main guy in a passing offense that has hit a bad patch as of late.

1. Zach Ertz vs. Houston-Ertz is coming off two horrible outings according to his usual standards but has still managed 33 targets over the last four.

2. Jared Cook vs. Denver-The Raiders want to go out on a high note if this is the last contest in Oakland. The Denver secondary is out of sorts and Cook will try to take advantage of it.

3. George Kittle vs. Chicago-Still a high volume play because the 49ers don’t have much else as far as weapons on the offensive side of the football.

4. Travis Kelce @ Seattle-Dicey one here with the Seahawks defense getting better, especially at home of the 12th man. Mahomes will aim his way as much as he can though.

7. David Njoku vs. Cincinnati-Found a trip to the house on 5 for 63 in the triumph at Cincy. Baker Mayfield will want to pour it on former coach Hue Jackson if he gets the chance.

9. Vance McDonald @ New Orleans-Less than decent play if there is no one else to put in at tight end.

10. Trey Burton @ San Francisco-Can’t be trusted on a weekly basis but got in the end zone to help the Bears conquer the Packers.