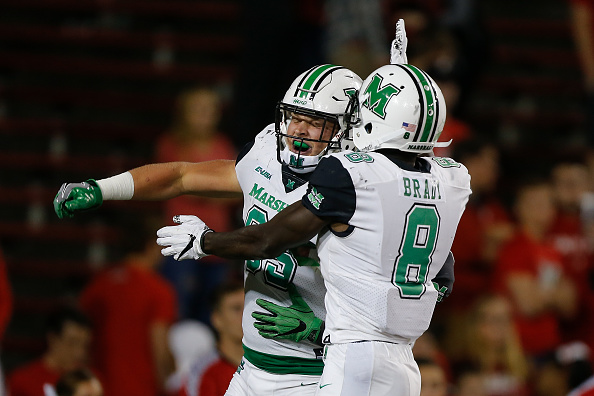 It’s that time of the year and no I’m not talking about the season of the big fat man breaking into houses eating cookies, drinking milk, and leaving gifts under the Christmas tree. It’s Bowl season, one last chance for players hoping to enter the NFL draft to leave a lasting good impression on NFL scouts.

Marshall Universtiy under head coach John “Doc” Holliday has won their last five bowl games and are hoping to make it a sixth on December 20th. The Herd’s offense will be led by Freshman quarterback Isaiah Green and Senior wide receiver Tyre Brady. Green has amassed 2,238 yards, 15 touchdowns, and 10 interceptions in his first year with Marshall and he’ll want to enter the offseason with his first bowl victory.

Tyre Brady is the Herd’s top NFL prospect. He managed almost 1,000 yards this season and nine touchdowns. With his next stop being drafted next April he hopes to put on a show for the NFL scouts.

Wanting to spoil all the fun and end Marshall’s Bowl winning streak will be former Texas and Louisville head coach and current USF head coach Charlie Strong. The Bulls look to finish their fifth straight year with at least eight wins. They have won their past two bowl games and hope to make it a third. USF will be led by Junior quarterback Blake Barnett and Junior tight end Mitchell Wilcox. Barnett threw for 2,477 yards, 11 touchdowns, and 11 interceptions.

Wilcox had 40 receptions, 506 yards, and two touchdowns for the Bulls. While the stats do not seem all that great he has also proven to be an excellent blocker. In three years he has helped four different rushers gain over 1,000 yards. Wilcox as a great receiver and blocker should make for a very nice prospect in the NFL.

On the defensive side of the ball, a converted linebacker from safety Senior Khalid McGee will lead the Bulls defense into stopping the Herd. McGee has over 100 tackles, including six for a loss, and a forced fumble.

The Bulls have lost their last five games before their bowl game with Marshall. And even though Marshall lost its last game of the season, the momentum has to be clearly in the hands of Marshall, even more than the three points Vegas suggests.