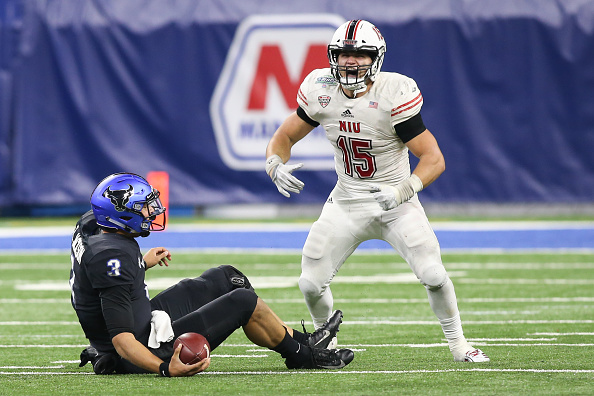 Two newly crowned conference champions in the Northern Illinois Huskies and UAB Blazers will meet in Boca Raton to do battle today at 7:00pm ET. NIU, appearing in its 13th bowl game, in fact, played Marshall in the first ever Boca Raton Bowl, back in 2014. UAB returns to its second consecutive bowl after having just won the Conference USA Title on December 1, over Middle Tennessee State 27-25. Less than two years after the program was back in full swing, having folded in 2014.

Strengths – The Huskies found a way to win games leaning on the dominant defense. They possess two of the elite Defensive ends in Sutton Smith and Josh Corcoran. Between the pair of them, they combined for 25 sacks. Spearheading a Defensive machine that led the country in total sacks with 50 an average of 3.85 per game. Not to be outdone they have two stud linebackers in Kyle Pugh and Antonio Jones-Davis that contributed over 90 tackles apiece.

Throughout the inconsistencies of the offense, they still had a strong rushing attack. Afforded two solid rushers in the backfield, Tre Harbison and junior running back Marcus Jones were the focal points of an old-school, smash-mouth style of football. Harbison contributed 985 rushing with 4 touchdown runs. Jones had 523 with 4 touchdowns. They both averaged over 5 yards a carry, not too shabby.

Weaknesses – It’s been a long time since Northern Illinois had a quarterback that can sling it in the pocket, guess some things never change. Marcus Childers has thrown for 1,996 yards this year with 15 touchdowns and 10 interceptions, completing 57 percent of his passes. He only had two games with over 200 yards passing.

Ranking seventh in the MAC in yards, sixth in touchdowns and third in interceptions. On the bright side of things, he did show a lot in the MAC Championship Game win over Buffalo completing 21-of-33 for 300 yards passing and four touchdowns. His best passing game this season bar none. Can he bring any of that magic to this Bowl match?

The receiver group as you can expect given the Quarterback production has been pretty stagnant. Jauan Wesley is leading in Huskies receiving with 585 yards and 2 touchdowns. The only other two options are D.J. Brown and Spencer Tears. They had over 800 yards and 9 touchdowns between them on the season.

Strengths – Head coach Bill Clark was named the winner of the 2018 Eddie Robinson National Coach of the Year award this past Thursday. With this award, he joins such esteemed names as Nick Saban and Brian Kelly. Last season, Clark and the Blazers beat the odds by going 8-5 in their first year back. It’s quite remarkable what he has been able to accomplish with such little opportunity in which to do it in.

Just like Northern Illinois, UAB brings with it a tough-as-nails defense to this Bowl game. Ranking near the top in many defensive categories, UAB, in fact, rates the 11th-best defense in the nation, as they have allowed 300.2 total yards per game this season and were fourth in the country in sacks with 43.

The UAB offensive line is much more ready to battle in the trenches then their upcoming opponent. Northern Illinois allowed 38 sacks this season at a rate of 2.92 per game, which ranks 113th in the country. In comparison, the Blazers only allowed 23 all season, ranking them a much more presentable 46th.

Weaknesses – The Blazers can be a bit offensively challenged, so if they can’t find a way to consistently move the ball, the defense will have to step up. The offense only bested 30 points four times this season, and their passing offense is just 99th in the country. This year has been especially bad as far as the quarterback position is concerned.

Succumbing to a pile of injuries this season beginning with quarterbacks A.J. Erdely and Tyler Johnston. Each guy took the reins for a time and didn’t really set the world on fire when they did, as neither player was able to throw for more touchdowns then pickoffs. Just recently Johnson tallied an uneventful 140 passing yards on 9 completions in the C-USA title game, and it looks like he will get the start against the Huskies.

Sutton Smith DE NIU – Smith has been the head of the defensive snake this season. Ranks fourth in the NCAA with 13.0 quarterback sacks, along with sixth in tackles for loss with 21.0. He picked up numerous accolades this year, including MAC Defensive Player of the Year honors, which he earned for his second straight year. Ranking third on NIU’s all-time sacks list with 30. Smith is only 1.5 sacks away from tieing the record set by Larry English.

Spencer Brown RB UAB –  Running back Spencer Brown showed just how much he can be relied upon in the Blazers’ Conference USA Championship win over Middle Tennessee. Brown had a dominating performance, as he carried the ball 31 times for 156 yards and a touchdown in the UAB win. Including a 30 yard scamper to the Middle Tennessee 20-yard line. That ultimately set up the Blazers winning field goal.

He earned 1149 rushing yards along with 16 touchdowns this season. Which ranks him third and second in Conference USA respectively.

Chris Woolbright LB UAB – In terms of NFL Draft prospects to keep an eye on in the Boca Raton Bowl, Chris Woolbright is among the top in my opinion. The senior linebacker led UAB with 74 tackles in 2018 to go with 13.5 tackles for loss, two picks, two pass breakups.

Even contributing an interception return for a touchdown which ranks first in C-USA and 10th in the country. Although lacking in the straight-line speed, he is intriguing for the linebacker position given his size.