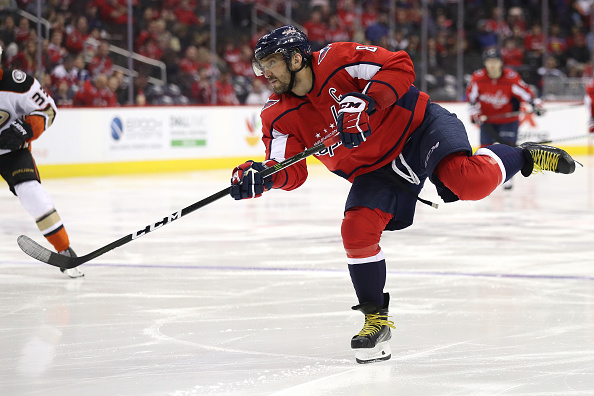 We all saw the celebration of Alex Ovechkin after winning his holy grail, the Stanley Cup. It can probably be safely said, that it never left his side unless it was in the hands of a teammate. Also having another huge first in his life, this time becoming a father, Ovechkin has had an incredible 2018.

Now the time has come for the Washington Capitals and Ovechkin to get back to work and re-climb the mountain toward a repeat. Can it actually happen?

On Nov. 14, the Washington Capitals were 8-7-3. Reuniting with Lord Stanley looked to be a long shot, especially with a new look and highly intensified New York Rangers team and a surging New York Islanders team that both looked better than advertised. Now, the script has changed with Washington (19-9-3) holding a five-point lead in the Metro Division over the always capable Columbus Blue Jackets. How they got there that fast, rest in the hands of their Captain, Alexander Ovechkin.

Over the last 13 games, dating back to Nov. 14, Ovechkin has rattled off 19 points (16g, 6a) in that time. Those 13 goals are just over half of his season total, a league-leading 28 in the first 31 games of the season. This may be his best season ever in terms of scoring production and overall dominance on the ice, but can it bring him back together with the Stanley Cup?

At the current status of the season, it is certainly possible, but he needs help.

Behind him in leading scorers for Washington is longtime line-mate, Niklas Backstrom (10g, 29a, 39p), and defensive assist machine, John Carlson (5g, 30a, 35p), but there are still some others that have remained dormant nearing the halfway mark.

TJ Oshie is among them, with only 15 points in his 20 games played. You may see that and think, well that is nearly a point a game, but in the games he hasn’t contributed a goal or an assist, the Capitals are 0-7-1. His importance cannot be understated, and for $7.5 million this season, a flashback of 2016-17 (33g, 23a, 56p) needs to shine through in the second half of this season.

For Washington, the bread and butter has been the Powerplay. At 27.37%, they sit behind only, Winnipeg, Tampa Bay, and Colorado for the most effective with the man advantage. Ovechkin (Seven goals) and Evgeny Kuznetsov (seven goals) have been incredible with 14 of the teams 26 powerplay goals.

Rookie head coach Todd Rierden has shaken off the unexpected slow start for a repeat. Having been an associate coach for the Capitals over the past four seasons, the mold was established with Barry Trotz calling the shots. Now, it is his show to run, and after the hangover settled, the machine in Washington is firing on all cylinders.

The Eastern Conference is incredibly stacked this season. Toronto is now fully assembled with the return of William Nylander, the unexpectedness of Buffalo and their incredible run thus far, and Columbus is again nipping at their heels in the Metro. At 31 games in, the races are tight. With the second half coming, and the February 25 trade deadline looming, there will be chaos.

Whether or not Washington can brace the impending storm of changes remains to be seen, but at this point last season, they are showing a mirror image. Last season, through 31 games, they were 18-12-1 with 37 points. Anything is possible, but it all runs through Alex Ovechkin.

With his 28 goals this season, which is a career high in 31 games, he is once again chasing some hardware. In addition to lifting Lord Stanley, he took home the Rocket Richard trophy for most goals, 49. Ovechkin has taken home this trophy seven times so far, and at the moment, looks like the “Gr8” is going for number eight.

As he is currently red-hot, the idea of him netting 30 goals this season is almost a guarantee, and if it is, then this would be another season with that marker. He has never gone a season, or shortened lockout season, without 30+goals, in his career. Now at 635 for his career, Ovechkin is 259 goals short of the “Great One”, Wayne Gretzky. That is five more seasons of 50+ goals.

It’s evident that Alex Ovechkin will be regarded as one of the greatest goal-scorers in NHL history. His shot from the circle on the left side of the ice, will go down in infamy and be praised for changing the game. His speed coupled with accuracy makes him one of the most exciting and dominating players of this generation of hockey players. To add to the impressive offensive numbers, his hitting and aggressiveness will also be atop his skillsets.

The only thing that was hanging over his head was the Stanley Cup. Yes, he finally got to lift it, but why stop at one. Gretzky won four and Sidney Crosby currently has three. For Ovechkin to finally be above those two, another Stanley Cup will have to come through Washington.