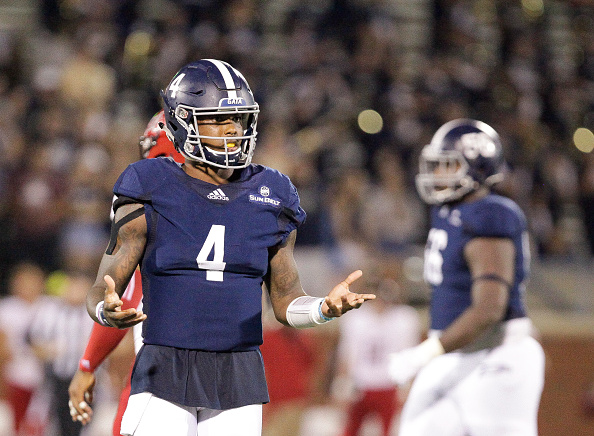 This game is a battle of Eagles. Georgia Southern will take on Eastern Michigan in Alabama today at 5:30pm ET. This game shapes up to be very low-scoring with both defenses ranked in the top 45 in the country.

Strengths – While they don’t throw the ball much, only 109 pass attempts all season, they are efficient when they do. Shai Werts has nearly a 60% completion percentage and a 10/0 TD/INT rate while averaging 8.8 yards per attempt. GSU runs the ball extremely well. Along with Werts (822 yards rushing), the Eagles also have Wesley Fields who leads the team with 959 yards on the ground. This combo has the Eagles 9th in the country in rushing with 260.8 yards per game. Efficiency is the name of the game and that shows in their turnover margin as well. They lead the country with a +22 and have only turned the ball over five times all season.

Weaknesses – While GSU runs an efficient offense, they are very predictable. Their run-to-pass ratio is nearly five-to-one. Although Werts is careful with the ball under center, he is an option QB. The sophomore may be forced to throw the ball more than intended and this could expose him to turnovers.

Strengths – EMU ranked 35th in overall defense but that doesn’t tell the full story. They were second in the conference with 24 forced TOs. They have a game-changing defensive lineman in junior Maxx Crosby. Crosby followed up his impressive 2017 campaign with another stellar season this year. He had 7.5 sacks, 18 TFL, and 4 FFs. Crosby even chipped in a pick-six and 3 passes defended. He and his linemates will be key to stopping the GSU running attack. On the offensive side, they are a bit more balanced than GSU, running only about seven times more per game than passing.

Weaknesses – While they were 5th in passing defense this season allowing only 160 yards per game, they did allow nearly 200 yards a game on the ground which ranked 93rd. Their defense plays right into GSU’s hands and what they like to do with the option. They also depend on forcing TOs which is another thing that GSU doesn’t do. Their offense doesn’t have a true playmaker. The running game is averaging less than 4 yards per carry as a team and no one has over 600 yards total. Tyler Wiegers has been pretty good this year but doesn’t have a true go-to WR with only Blake Banham catching more than 50 balls (54-714-5).

This game should come down to what will give for either team. The big matchup to watch is if EMU’s defense can force the turnovers when GSU doesn’t give up the rock. Also, keep an eye on how well Shai Werts and Wesley Fields can execute their plan and run the ball against EMU when they know it’s coming. If EMU can keep it close they will need Tyler Wiegers or Shaq Vann to step up and come through with a big play. I expect this to be low scoring and pretty close but Georgia Southern should come out on top.