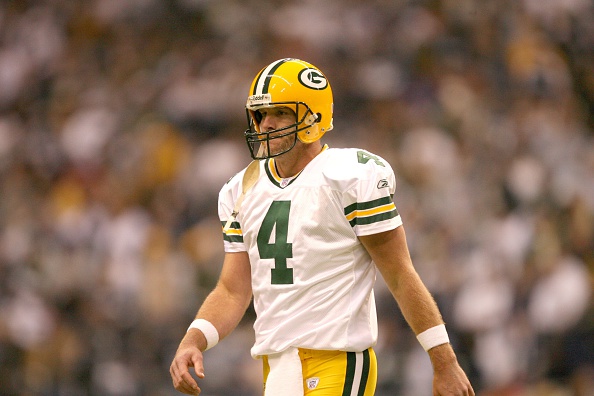 Boy, have things changed since the first version of this article went out, the NFL went from almost exclusively running the football, to finally swinging the ratio of plays towards the pass. In the 4th time frame of this series, however, things started to get crazy for the pass. Teams started to center their offense around the pass, like the run-and-shoot offense that some teams ran.

This era was filled with prolific passers, but none passed the football like Brett Favre, who was the best pure passer during this time frame, he played for the Green Bay Packers and restored them to greatness with his freelancing, gun-slinging style of throwing the football. He changed the way defenses looked at the position, because of his pure arm strength and ability to escape the pocket and pass on the run. Brett Favre in this timeframe has one of if not the best three-year span a QB has ever had, he astounded MVP voters with his numbers from 1995-1997, passing for 12,179 yards, 112 TDs, 42 INTs, and a passer rating of 96.1. He put up such impressive numbers, that he was voted the Associated Press’ MVP an unprecedented three times in a row. In this span, he also led Green Bay to Super Bowl XXXI, beating the Patriots. The efficiency of which he put up these statistics was concrete proof that the times had changed, and teams were passing more than they were running. In total during this time frame, he racked up 38,627 passing yards, 287 TDs, and 172 INTs.

Another excellent QB during this era that may have done more than Favre did for QBs is Steve Young. Steve Young was one of the first mobile QBs that had the arm to go along with the mobility. He would run out of the pocket if he was in trouble and sling the football to one of his receivers. He earned MVP honors twice in three years between 1992-1994 and earned All-Pro honors three times in a row during this span. The proliferation of passing caused more spread out All-Pro voting also. Steve Young took over the 49ers starting QB job after Joe Montana, so he had huge shoes to fill, and he did it quite well. Another QB who changed things was Warren Moon and the Oilers Run-And-Shoot offense. During the ’80s, Warren Moon made his NFL return from the Canadian Football League and put the NFL on notice during the ’90s. During the ’90s, Warren Moon went to seven Pro Bowls and was a top passer in the era. He never won a Super Bowl, and his playoff legacy will always be remembered by his team blowing a 35-3 lead in the 1992 AFC Wild Card game. He accumulated 31,025 Passing Yards, 190 TDs, and 135 INTs. He will be remembered for making defenses fearful with his arm and being one of the first truly great and memorable African-American Quarterbacks to play and succeed in the NFL. Another one of the best passers to play in the era was Jim Kelly. He led the Bills to four straight Super Bowls, losing them all. He and his no-huddle offense dominated the league offensively for this time frame but weren’t able to get it done in the big game.  Kurt Warner, an undrafted QB, led the Rams Greatest Show on Turf offense to a Super Bowl victory and he was awarded two league MVPs for his passing prowess. He got overlooked in the draft and made every team pay for it.

The sheer amount of good and memorable QBs is a telltale sign that the times changed and were becoming more pass-happy. In 1991, teams were averaging 60 more passes than they were runs, and in 1995, teams were attempting on average per season 117 more passes than they were runs, because the pass was a more appealing play than the run, because of the exponential difference in gain you could have through the pass. The teams that did a better job balancing out the run and the pass were successful. The 49ers and Cowboys did this to a great extent. In this era, passing stats started to noticeably go up, as you would expect. All in all, this era had many prolific passers, some that deserve to be mentioned are Drew Bledsoe, who led the Patriots to a Super Bowl loss and was selected to four Pro Bowls, Randall Cunningham, who is remembered best for being a great mobile QB, John Elway, who won two Super Bowls and made six Pro Bowls in the decade, and finally there’s Troy Aikman who also went to six Pro Bowls but won three Super Bowls. In conclusion, the era changed even more than it had in the last time frame, to an era where the pass-dominated over the run, for the first time.