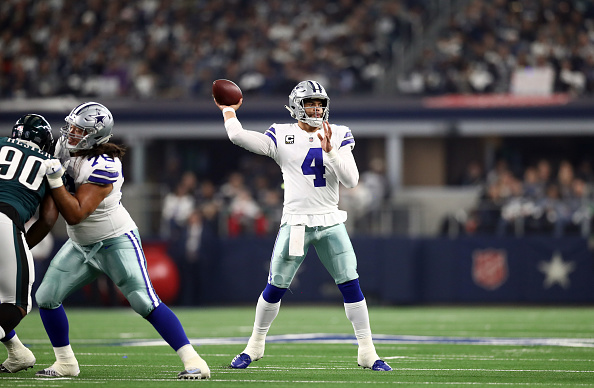 It’s Week 2 of the fantasy playoffs for most of you. Hopefully, Dak and Lamar led you to glory. Hopefully, Josh Allen can lead you to glory this week if you can’t get your hands on Dak. I’m hesitant about Lamar Jackson given that Joe Flacco could steal snaps from him. Every point counts now. Full-time starters > quarterbacks named the starters who might surrender some passing snaps. So I would rather play Josh Allen than Lamar Jackson this week despite the Tampa Bay matchup.

Rex Burkhead: 1 pt, 4 rush, 2 yds, 1 reception, 3 yds – Game script phased Burkhead out. High scoring back and forth didn’t suit him well with all the pass-catchers in NE.

Dak Prescott is the top streaming option if he is available in your league against a beatable Colts defense with a solid run defense. Have to ride the hot hand with Dak and Cooper.

Josh Allen is QB1 in weeks 12-14. Yes, I said QB1. If you are streaming you have to consider one of the hottest fantasy quarterbacks in the game right now. That achievement is thanks to his rushing ability, which seemingly no team can stop. I don’t care about teams’ stats about quarterback rushing yards, those are severely influenced by quarterbacks who never run the ball. Josh Allen has just about as much upside as any quarterback right now, other than Patrick Mahomes.

Denver has lost their best defensive back, Chris Harris Jr. to a broken fibula. He would have been slated to cover Jarvis Landry who should now take advantage of a matchup with a backup. The Broncos allowed Nick Mullens to throw for 332 yards and two touchdowns. That game was in San Francisco but a better quarterback with better weapons should be able to do damage even if the game is played in Denver.

Ian Thomas saw 11 targets last week. That is enough to make him the top streamer of the week purely based on volume. He caught nine of those targets for 77 yards. The Panthers and Cam Newton have made a point to get him the ball, possibly due to Newton’s weak shoulder, but Thomas has 14 receptions over the past two games. That is hard to come by for a tight end. He has a tough matchup against the Saints, but there are not any better options anymore this season.

Chris Herndon had a quiet game last week in Buffalo. That kind of thing happens with young players and especially young players on bad teams. This week, however, the Jets host the Houston Texans, who have been a bottom-ten defense against the position this season. The Texans bring a lot of pressure so the Jets QB will need to look to get the ball out quickly. The Texans also have a strong run defense so the Jets simply might just not have many other options to move the ball.

The Seahawks just completely shut down the Minnesota Vikings and score a defensive touchdown. The home crowd in Seattle adds an immeasurable element to the defense’s performance, but a team on a four-game winning streak fighting for its playoff life deserves consideration as a defensive stream against a team they blew out two weeks ago.

The Falcons host the Cardinals. The Cardinals can’t score points. Josh Rosen will probably throw interceptions when they are trying to catch up to the Falcons passing attack. The Lions had a pick-six last week against Rosen. The Falcons are not a great defense, but at home against a terrible offense, Atlanta represents a flier streamer that you can feel confident won’t completely bust.

Kenneth Dixon is slowly gaining control of the backfield in Baltimore. A much more versatile player than Gus Edwards, I would not be surprised to see them have at least an equal touch count at the end of this game. Dixon offers more receiving upside than Edwards. Dixon scored last week, something Edwards hasn’t done in three weeks. Edwards is their one-dimensional bruiser between the twenties. I think Dixon claims this starting job mid-game this week and is the starter next week. The Buccaneers are terrible against the run, Dixon is a very safe “deep” start with high upside. He is only considered deep because of how little he is owned. He should be owned almost everywhere, in reality.

DaeSean Hamilton is Emmanuel Sanders’ replacement as the slot receiver in Denver. He will take over the most targeted position in the offense. Last week, Hamilton had seven receptions for 47 yards and a score. He scored on a red zone opportunity giving him an added boost to his upside as he is targeted near the end zone. This week he will face Cleveland, who have good outside cornerbacks that will be covering Courtland Sutton and Tim Patrick. Hamilton has a plus matchup in a game where Denver could have to keep up with the Browns offense.