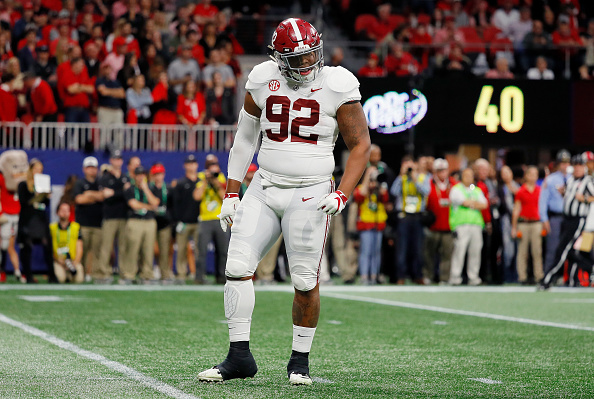 Now that the college football regular season is over the biggest thing to debate is who will win the Heisman Trophy Award tonight? After that, it’s bowl season and the college football playoffs. But as all that unfolds, several college players have already declared for the 2019 NFL draft. While we still have over five months until the draft kicks off in Nashville, Tennessee, there is no bad time to check out a mock draft. As a reminder, both of us made 16 picks and we do hate your favorite team.

The draft order was set prior to the start of NFL week 14.

Even after drafting plenty of defensive lineman over the past few years, the 49ers still struggle to rush the passer. Williams is an absolute monster with no weakness in my opinion. He is the number two player on my big board. – Gio

John Gruden has traded away everyone else on the roster who is half decent, so why not Derek Carr? If Herbert declares and Gruden wants “his guy” I fully expect the Raiders to trade Carr (whose contract is easy to trade) in the offseason in order to add more draft picks to Chucky’s wild rebuilding project. – Mike

Somehow, someway the Jets get EXACTLY what they need; an elite pass rusher on the outside. Adding Bosa to a young defense that already includes players like Leonard Williams, Jamaal Adams and others will take pressure off of Sam Darnold and the offense. I wouldn’t be surprised to see the Jets hire an offensive-minded head coach and spend big money in free agency on the offense side of the ball. – Mike

Oliver fell to fourth on my board after his injury and announcing he will skip the bowl game. Nevertheless, Oliver is still an incredibly athletic defensive lineman who could be used as a hybrid player, where he lines up all along the defensive lineman. He has to put on some weight though. – Gio

With Urban Meyers retiring, does anyone think Haskins will return to Columbus next season? Especially if Herbert returns to Oregon, Haskins is a lock for a top-five selection. Eli Manning will turn 38 in January and he should have been replaced years ago. A trio of Haskins, Saquon Barkley, and Odell Beckham Jr. would scare opposing defenses for the next decade. – Mike

The Jaguars need a quarterback but there isn’t one good enough on the board worth the pick. In reality, I’d have them trade down. Since we aren’t doing trades in this mock draft, White will start at middle linebacker and bring the Jaguars back to the monster defense they were last year, in my opinion. – Gio

Through week 13, the Lions have given up 36 sacks, tied for the ninth most in the league. While both starting tackles are under contract through the 2020 season, some draft analysts believe Williams is better off inside at the NFL level. Either way, the Lions’ offensive line has been a mess this season and Matthew Stafford has been hit way too many times. – Mike

The Bills just released Kelvin Benjamin and Andre Holmes, while Zay Jones and Robert Foster look like keepers, Metcalf can make this wide receiver group so much better. Giving Josh Allen another weapon should be the Bills’ top priority this offseason. The only red flag with Metcalf is the neck injury. – Gio

Despite spending recent first round picks on Vic Beasley and Takkarist McKinley, the Falcons have the fifth-fewest sacks in the league through week 13 with 23. In a division where the Falcons have to face Cam Newton, Drew Brees, and the Buccaneers pass-happy offense six times a year, you need to get pressure on the quarterback. – Mike

With the questionable trade of HaHa Clinton-Dix, the Packers are in need of safety help. Thompson is the best safety in this draft class and can fill Clinton-Dix’s shoes perfectly. – Gio

Somehow Williams slides this far in this mock draft. If this happens in real life the Browns should take about three seconds to turn in their selection. Pairing Williams with last year’s number four overall pick Denzel Ward would give the Browns two great young corners in a division where they see Antonio Brown and JuJu Smith-Schuster twice. – Mike

Obviously, the Buccaneers need help in the secondary as they can’t stop anyone. Murphy has really jumped up my board and should be the pick here since Greedy Williams was selected one pick before. – Gio

The DeVante Parker experiment is over. The Dolphins can release Parker with no dead money provided he can pass a physical after the season. Doing so will open up just under $9.4 million dollars in cap space. Harry is a similar player to Parker, but hopefully, he can stay healthy, unlike Parker. – Mike

Not many have heard about Smith, but he is a very athletic and strong defensive end who creates havoc for the opposing team. He is a little raw but has superstar potential if utilized correctly. – Gio

Both starting defensive ends are over the age of 30 and the Panthers clearly need to add some youth to the position. Some believe Polite is on the same level as Bosa and Ferrell, either way, the Panthers can’t rely on Julius Peppers for much longer, as he turns 39 in January. – Mike

Jalen Mills is horrible and the rest of the secondary is incredibly injury prone. Adding at least one cornerback is a must for the Eagles this offseason, why not bring the 2018 Thorpe award winner? – Gio

Lock may be one of the more polarizing players in this year’s draft class but we all know quarterbacks get pushed up draft boards come April. The Redskins are in a really tough spot with Alex Smith. His career is at risk thanks to his broken leg injury and if he can’t play again, the Redskins are on the hook for $71 million dollars. The Redskins should have drafted a quarterback last year but better late than never. – Mike

Jones is incredibly athletic and has great pass rush moves. Jones is severely underrated because of all the media attention Nick Bosa got at Ohio State. – Gio

The Broncos need to find a long-term answer at quarterback, but with none worth with the pick here, they turn to another big need on offense; tight end. The Broncos have placed three tight ends on injured reserve this year: Troy Fumagalli, Jake Butt, Jeff Heuerman and none of them offer the same upside Fant does. If you can’t upgrade at quarterback, the next best thing is to give him the best supporting cast possible. – Mike

Riley Reiff has seriously regressed this season, Rashod Hill clearly isn’t a long-term option and I don’t know if Brian O’Neill is the answer. Cajuste is my favorite offensive tackle in this draft class. – Gio

John Brown is a free agent after the season and may look to cash in on a long-term deal somewhere else. Hollywood Brown would pair well with Lamar Jackson’s play style and is a huge deep ball playmaker. – Gio

The short-lived Will Dissly stint was nice, but the Seahawks still need to find Jimmy Graham‘s replacement. The duo of Nick Vannett and Ed Dickson isn’t the answer and Russell Wilson clearly needs a more dependable playmaker at tight end. If Smith Jr. declares, he is likely a late first or early second round pick. – Mike

The Chargers don’t have many needs on paper and I think Simmons would be an upgrade over Corey Liuget or Damion Square in that defensive line rotation. – Gio

Last year’s first-round pick Kolton Miller has struggled this season and Donald Penn will turn 36 years old just before the 2019 draft. Whether it is Carr or Herbert at quarterback, the Raiders need to do a better job protecting them as they have allowed the fifth most sacks this season through week 13. – Mike

Bush is immature and has poor character but that can be adjusted under Head Coach Mike Tomlin. Unfortunately, the odds of Ryan Shazier playing again are slim and the Steelers need to find his replacement. Bush comes with concerns but he is the best linebacker left on the board with Mack Wilson reportedly returning to Alabama. – Gio

It’s really not that hard to find pass rushers in this league. Just ask the Bears who took total advantage of the Raiders and got Khalil Mack for cheap. So, of course, the Raiders are dead last in the league with 10 sacks through week 13; nine less than the second-worst team. Hopefully last year’s third round pick Arden Key can stay on the field but the Raiders should add as many pass rushers as possible this offseason. – Mike

How many times has Deshaun Watson been hit this season? The correct answer is way too many times. Whether it is at tackle, guard or center, the Texans need to upgrade all across the offensive line. Deiter should step in as a starter on day one. – Gio

Starting cornerback Jason McCourty is a free agent after the season and isn’t likely to be resigned as he turns 32 years old before next season. Last year’s second-round pick Duke Dawson is better off as the nickel back and hasn’t made his career debut yet. The Patriots clearly need to improve their secondary this offseason. – Mike

Randall Cobb is likely to be a salary cap casualty, while Marquez Valdes-Scantling and Equanimeous St. Brown haven’t shown enough to stop the Packers from drafting a wide receiver early in the 2019 draft. Pairing Butler across from Davante Adams would give Aaron Rodgers a nice set of starting wide receivers. – Gio

Earlier in the year, many expected Gary to be a top ten pick but concerns on about his weight and where he lines up have cooled off that kind of talk. Starting defensive lineman Allen Bailey will turn 30 years old in March and is a free agent this spring. If the Chiefs decide not to resign him, Gary would be a nice replacement opposite of Chris Jones. – Mike

The Rams don’t have many needs on paper, but adding a hybrid linebacker/pass rusher specialist would make this defense even better. Everyone saw what Samson Ebukam did a few weeks back against the Chiefs, imagine how much better he would be with Allen on the other side. – Gio