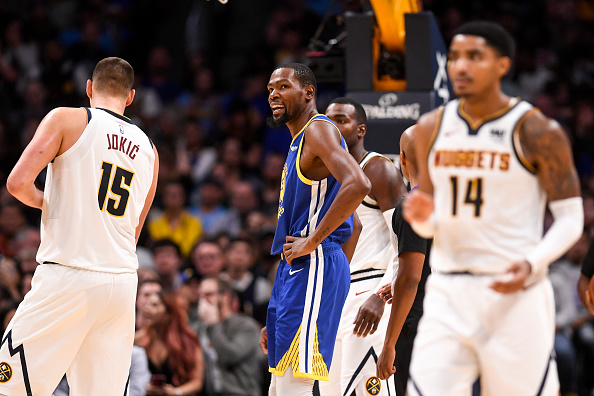 At the beginning of the season, I made various predictions about the Western Conference. Like many other NBA fans, I have been blown away by how the Western Conference has panned out. The Golden State Warriors falling apart, Carmelo Anthony leaves the Houston Rockets, and as of right now the Los Angeles Clippers in the top of the standings?!

I wrote my predictions about the Southwest Division, and for the most part, I’ve been wrong and I could never have guessed how it would evolve. Whether it’s playoff predictions or the teams’ statistical future, the West has been unpredictable. Here are my picks for the teams that have been nothing short of an eye-opener, whether that’s a good or a bad thing. I’ll begin with the positives and descend to the negatives.

The Denver Nuggets had an astonishing beginning to their season. While they are my favorite team, I actually found myself rooting for the Nuggets as they jumped out of the gates on fire. Currently ranked the first in the Western Conference, Denver had a 10-1 start that included victories over both the Warriors and a 25-point blowout against the Utah Jazz.

The biggest surprise was their defensive efficiency. After starting off the season ranked first in this category, they are currently ranked third in the league defensively as well as overall win percentage, and will most likely remain in the top five in the league. They currently rank second in the league in opposing points per game with 102.7. The core of the team’s power is centered around their starting lineup that consists of Jamal Murray, Gary Harris, Nikola Jokic, Paul Millsap and Juancho Hernangomez. This quintet combines for 71 of the team’s 110 average points per game. Murray is most notably having a breakout season, recording the best numbers in his career with 17.3 points, 5 assists, and 1 steal per game. Meanwhile, Nikola Jokic is a triple-double threat every night. The Nuggets have had an unexpectedly successful season thus far, and look to be impeccable on most nights. There will be no surprise if they make a serious playoff run in the postseason.

My second pick for over-performing teams is another one that I believe nobody saw coming. Even the prediction ESPN put out before the season ranked the Clippers eleventh in the Western Conference. Clearly, the team’s success has been totally unexpected. Now tied for first with the Nuggets in the West, the Clippers are looking to manifest into serious playoff contenders at the end of the season. In their first month of play, Los Angeles recorded a 20-point victory over the Rockets as well as a win against the Warriors.

Unlike the Nuggets though, the Clippers’ string of success has come from their insanely efficient offense, as well as players who have come up with unexpectedly big numbers. Led by their starters, Shai Gilgeous-Alexander, Avery Bradley, Marcin Gortat, Tobias Harris, and Danilo Ganillari, the Clippers are currently having a breakout season the team hasn’t seen since the Lob City era. Harris is currently recording his best season ever in LA, averaging 21.6 points and 8.4 rebounds per game to lead the team. Gallinari is also enjoying a breakout season, averaging 19.2 points and 6 rebounds per game. Combined, their starting five currently account for 65 of the teams 117 ppg on average. Last season, the team finished with 42-40 record but with the exit of stars and the inheritance of new leaders, I believe there is no question the Clippers will defy expectations this year. Though it may be far-fetched to estimate any real success in the postseason, the Clippers are having a historical season nonetheless.

The Warriors are not having a terrible start to their season, but having such high expectations going in made it easier for fans to be let down. At the time of this writing, the Warriors are currently ranked fourth in the Western Conference, behind the Clippers, Nuggets, and Oklahoma City Thunder, and have the league’s sixth-best record. The Warriors started their season with a 10-1 record, something expected from the defending NBA champions. As the season continued though, the Warriors saw a steep decline in their victories. They just couldn’t stay consistent, especially in November. Led by Kevin Durant who is currently averaging 30 points per game, Golden State is operating completely from a big three. Durant, Stephen Curry, and Klay Thompson all average above 23 points, but no one else on the team is averaging above nine points.

As fans have seen with teams such as the Rockets, having a team that wins efficiently is extremely difficult relying on a couple of players. KD is having a breakout season that includes a 51-point game, yet his team is barely scraping out wins by a couple of points. The expert predictions on ESPN have since been wrong about the Warriors as well. Before the start of the season, they were expected to scorch the whole Western Conference, but the team has yet to exploit their dominance, as they are lacking on the defensive end. Their offense is currently top five in the league, but Golden State allows 111.2 points a game, ranking them 19th for opposing points per game. The Warriors will make the playoffs and a deep run will be no surprise but, so far, Golden State has been underwhelming in their start to the season, something shocking from such a prestigious franchise.

The Houston Rockets have been an utter disappointment so far this season. They are currently ranked twelfth in the West and fourth in the Southwest Division. After losing in the conference finals last season, to see them in the bottom half of the league is truly astounding. The Rockets have had the biggest falloff of any NBA team so far. When asked, Chris Paul shrugged off the scrutiny saying, “No team can beat us in seven games.” Well, the way the team is looking at this point, the chances of even making the playoffs are bleak for H-Town. Currently, with a record below .500, the Rockets rank in the latter half of the league in every statistic except offensive rebounds, where they rank twelfth. The previously mentioned experts who made predictions on ESPN ranked the Rockets second in the West.

Some of the Rockets’ problems could be attributed to their serious chemistry issues early on in the season. To begin, the Carmelo Anthony dilemma brought down the starting lineup. Anthony, who has since exited the team, forced himself into the front line five and was a wedge in the Rockets’ offense as his statistics were at their lowest in his career. When coming off the bench, Melo’s numbers only plummeted and now, he still hasn’t found a team that wants to acquire him. The loss of key players such as Trevor Ariza, Luc Mbah a Moute, and obviously the reliance on Anthony have all led to Houston’s downfall. All Rockets fans can do now is hope that their team can pick up the pieces.