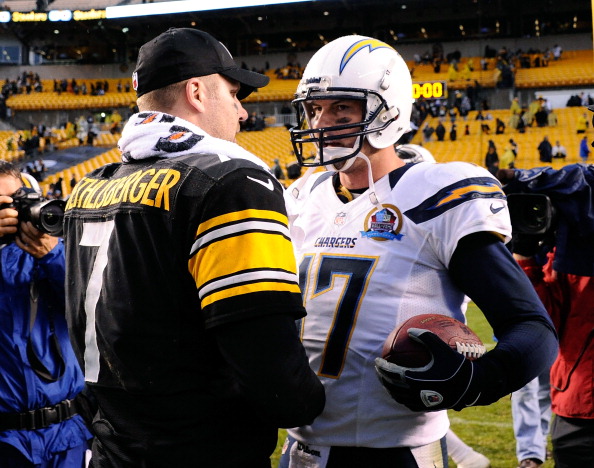 Philip Rivers is arguably the most underrated and underappreciated quarterback of all-time. When talking about elite QBs, and all-time great QBs, many people mention the likes of Drew Brees, Tom Brady, Brett Favre, Kurt Warner, Aaron Rodgers, Ben Roethlisberger, even Eli Manning, but they never mention Philp Rivers. Those other QBs have at least one championship, but, this could be the season Philip Rivers and the Chargers make the super bowl and win it all.

Rivers is having an MVP candidate season. If he can lead the Chargers to a 13-3 season, including wins in Pittsburgh and in Kansas City, he could very well be the MVP this season. Rivers has thrown for 3,169 yards, 26 touchdowns, and 6 interceptions, while leading the Chargers to an 8-3 record.

Ben Roethlisberger has thrown for 3,664 yards, 24 touchdowns, and 12 interceptions. Big Ben has arguably the best receiver in the league in Antonio Brown. The Steelers are 7-3-1 now. Big Ben needs to have a big game against the stingy Chargers defense, but it’s not going to be easy.

The Chargers are poised to win the division this season. Joey Bosa has returned and looked good last week against the Arizona Cardinals as the Chargers cruised past the Cardinals en route to a 45-10 win. The Chargers defense has a lot of talent. Joey Bosa, Melvin Ingram III, Derwin James, Desmond King II, Casey Hayward Jr., etc. Big Ben has a tough task ahead of him tonight.

The Chargers get there first primetime game of the season, first of three in four weeks. Philip Rivers also known as “Philcember” in December, due to his 39-19 record in regular season games played in December since 2006. Tonight will be a showdown in Pittsburgh, Chargers will be without Melvin Gordon, but, Austin Ekeler has been phenomenal in the role he’s been given this season. I expect Ekeler, Keenan Allen, and definitely Philip Rivers to have big games tonight. I think James Conner will have a big game too. Big Ben could struggle tonight against the Chargers’ elite pass rush. He needs to get Antonio Brown more involved in the offense, to have any chance of winning tonight.

Chargers need the win to keep up with the Chiefs. If they win out and Chiefs lose a game, including a December 15th matchup in Kansas City against the Chargers on Thursday Night Football, Chargers could not only be AFC West divisional winners, but also have the best record in the AFC. The Steelers need the win to remain atop in the AFC North. It should be a very entertaining game tonight, I expect Philip Rivers to have a big night, lead the Chargers past the Steelers in a playoff atmosphere game.