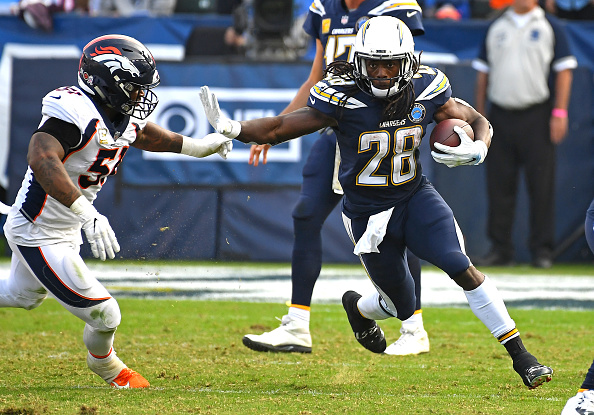 First off, I hope everyone’s Thanksgiving was filled with food, family, and football. Week 12 of the NFL has started and now that 6 teams have played and there are no Kansas City Chiefs nor L.A. Rams after their instant classic, who can fill in for the likes of Todd Gurley, Kareem Hunt, Tyreek Hill, Travis Kelce and other fantasy league leaders? Here are this week’s PPR rankings to find out.

1. Melvin Gordon vs. Arizona-Look for the Chargers star to put up monster numbers in this highly favorable contest.

2. Saquon Barkley @ Philadelphia-Ran for 142 last week in Tampa and combined for 229 yards in the week 6 loss to the Eagles.

3. Christian McCaffrey vs. Seattle–Cam Newton should continue to eye McCaffrey in the passing game which makes him an RB1 in this playoff-like batt

4. Leonard Fournette @ Buffalo-The Jags are falling apart, but Fournette finds ways to get his. Three touchdowns for him in the last 2 losses

5. Joe Mixon vs. Cleveland-Didn’t accomplish much in the loss to Baltimore, but will put up better stats hosting the Browns in a must-win tilt

6. James Conner @ Denver-Coming off his worst start of the year. Conner will prove why the Steelers made the right decision in making him their starter in Le’Veon Bell‘s absence.

7. Marlon Mack vs. Miami-The Colts are on fire and Mack could benefit from the way Andrew Luck and his other teammates are balling out.

8. James White @ New York Jets-Hasn’t been targeted less than 7 times since week 3. Had 31 carries in the 3 weeks before The Titans game.

9. Matt Breida @ Tampa Bay-Breida put up 132 yards from scrimmage vs. the Giants before the bye. He is fully healthy and the Bucs run D is atrocious.

10. David Johnson @ Los Angeles Chargers-Johnson has had over 20 carries the past two games. He has finally started getting the volume he deserves and is performing accordingly.

1. Adam Thielen vs. Green Bay-Thielen has come back to earth a bit. He did manage 12 grabs for 131 yards and a score in the week 2 duel with the Packers.

2. DeAndre Hopkins vs. Tennessee-Hopkins found the end zone and snagged in 6 for 110 in the week 2 loss at the Titans. The Texans have only lost once since.

3. Odell Beckham Jr. @ Philadelphia-The Giants come in riding a 2-game win streak and Beckham was held under 75 yards in both wins. He still took it to the house though, 3 times altogether in those victories

4. Antonio Brown @ Denver-Brown has scored in every game except one this season. He’ll likely get more in the mile high city again.

5. Davante Adams @ Minnesota-The Packers are in must-win mode and that means they have to get the ball to the fourth most targeted pass catcher in the NFL in Adams.

6. Julian Edelman @ New York Jets-He is Brady’s favorite target. Since returning from suspension he hasn’t had less than 7 targets in a game and he has had 10+ the last three games.

7. Mike Evans vs. San Francisco-Looks like a must-start on paper, but which Mike Evans will show up in reality?

8. Stefon Diggs vs. Green Bay-Got in the end zone twice while torching the Packers for 128 yards in the earlier season division matchup.

9. Keenan Allen vs. Arizona-Three consecutive solid outings for Allen after the bye week.

1. Zach Ertz vs. N.Y. Giants-Ertz was held in check in New Orleans, but so was the entire Eagles team. He had 7 for 43 and a TD in the week 6 triumph at New York.

2. George Kittle @ Tampa Bay-Kittle’s rise to prominence at a weak position will almost certainly march on in this one.

3. Rob Gronkowski @ N.Y. Jets-Gronk is back to hopefully dominate for the rest of 2018.

4. Greg Olsen vs. Seattle-Four out of the last five games with a touchdown for the Olsen/Newton combo.

5. Cameron Brate vs. San Francisco-With O.J. Howard on IR, Brate becomes a primary target for whichever Bucs QB is tossing it his way.

7. Evan Engram @ Philadelphia-Rounding into a more reliable form again, just in time for the fantasy playoffs.

7. Jack Doyle vs. Miami-Caught all of his 7 targets over the past two wins and is trending upwards on a pretty reliable tight end heavy attack.

8. David Njoku @ Cincinnati-The Bengals are near the bottom of the barrel when it comes to covering tight ends. Baker Mayfield would be mighty smart to target Njoku early and often on Sunday afternoon.

9. Eric Ebron vs. Miami-A goose egg in the blowout victory over Tennessee. That shouldn’t steer you away from Ebron who’s been a top ten tight end for 2018 thus far.

10. Jared Cook @ Baltimore-Cook has been targeted 15 times in the last two games.