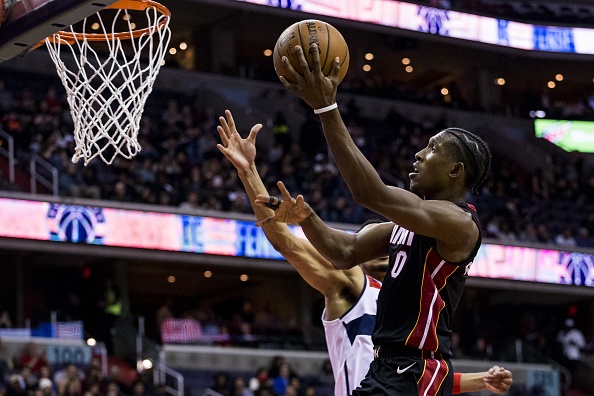 The NBA’s Most Improved Player award is typically given to players who make a big statistical jump from their previous seasons. Last season, Indiana Pacers guard Victor Oladipo took home the NBA’s Most Improved Player award after having a breakout season. Oladipo set career-highs in points (23.1), field goal percentage (.477), three-point percentage (.371), rebounds (5.2), assists (4.3), and steals (2.4). He also led the Pacers to 48 wins, the fifth seed, and a near-upset of the Cleveland Cavaliers in the first round of the playoffs, ultimately losing in seven games.

This year’s NBA Most Improved Player could be Miami Heat guard Josh Richardson. Selected 40th in the 2015 NBA draft, Richardson has improved his production in each of his first few seasons in NBA. He went from competing for a rotation spot to becoming his team’s leading man.

We know Richardson has always been a great defender. At 6′ 6″ with long arms and quick feet, he gives his opponents fits on the court. Once you think you have a step on him, he always recovers quick enough to contest the shot. According to NBA.com stats, Richardson holds his opponents to 44.2% shooting.

On the other side of the ball, Richardson has become the Heat’s most consistent scorer, and he’s been making clutch buckets as well. He is currently averaging career bests in points (20.1), rebounds (4.0), assists (3.4), and shots per game (16.2), while shooting an efficient 42.7% from behind the arc. On November 6th, Richardson scored 27 points to lead Miami past the Detroit Pistons, scoring nine of the Heat’s 15 points in overtime.

“It’s the first time he’s been called on to do this,” Heat guard Dwyane Wade said, via the Associated Press. “The shots he was taking in overtime and making, those were big-time shots. We want him to have the confidence to continue to take it to the next level, because we’re going to need it.”

It’s because of this great start that Miami pulled Richardson out of a deal involving Jimmy Butler, who recently got moved to the Philadelphia 76ers in exchange for Robert Covington, Dario Saric, Jerryd Bayless and a 2022 second-round pick. Moreover, Richardson’s on a team-friendly deal that pays him $42 million over the next four seasons, while Butler is in line to make more than that in the last year of his expected five-year, $190 million max contract after this season.

While Richardson is a strong candidate for the Most Improved Player award, he faces stiff competition for the award with Chicago Bulls guard Zach Lavine and Sacramento Kings guard De’Aaron Fox are both off to great starts so far. That being said, it’s still early with under 20 games being played so far. Let’s see how it plays out as the season progresses.