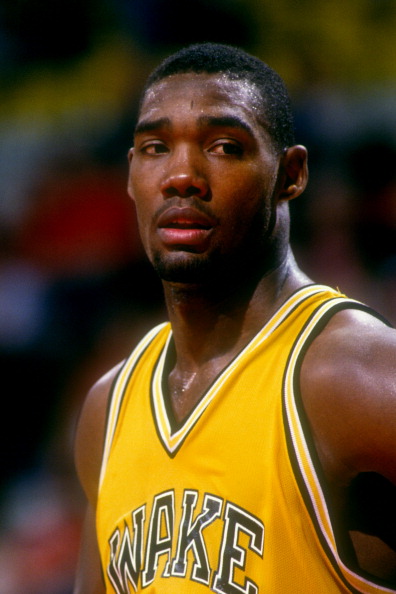 You know those moments that have happened throughout NBA history?

“Havlicek stole the ball!” Or the time when Magic Johnson, as a rookie, started at center in place of an injured Kareem Abdul-Jabbar – at that point, arguably the GOAT – in the NBA Finals and absolutely dominated, capped off by using Kareem’s signature skyhook. Michael Jordan on Fathers’ Day. MJ again, in 1998, hitting that shot, the shot that was supposed to be the last one of his career. LeBron James leading his hometown team back from down 3-1. Reggie Miller: eight points in nine seconds. There’s a level of perfection to all of those moments that makes them as memorable and legendary as they are.

But let’s rewind back to Reggie Miller’s eight points in nine seconds.

What if I told you that someone else pulled that off? And did it better.

And did it as a rookie.

Let’s take a look back at when Rodney Rogers, in his first year in the league, scored nine points in nine seconds.

Rogers was always going to be a very good basketball player. While he was certainly dealt his share of hardships growing up, he simply had the genetics to succeed at the sport.

He would grow to 6’7” and 235 lbs, which in the world of basketball is a very good frame, but by no means extraordinary, and it was athleticism and offensive skillset that made him shine in high school and college, averaging 28 points and 12 rebounds per game during his senior year at Hillside High School, before averaging 21 and 7 in his final year of college.

Rogers became one of the top picks in the draft at #9, and yet many people thought he might prove to be a steal even as a lottery pick.

As he transitioned into the league for the Denver Nuggets, his main problem quickly became apparent; his size didn’t fit his game. He played power forward, and he simply wasn’t big enough to play that position.

While today that would not be a problem, and in fact it would be seen as an asset to develop, coaches and analysts in the nineties did not think the same way. He was labeled a ‘tweener’, and throughout his career would find himself in quite a conundrum as to what position he should play. He would start to succeed at power forward for one coach, then there’d be a coaching change, and all of a sudden he would be asked to play a very different role as a small forward, before the cycle would repeat itself. This constantly contradictory development absolutely limited his career and shortened his peak.

But at this point, it was still his rookie year. He was playing for Denver as the backup to LaPhonso Ellis at power forward, and he looked promising (at least offensively), averaging 8.1 points and 2.9 rebounds a night in just under 18 minutes a game. This is the Denver Nuggets team of 1993-94 however. The first eight seed to really take the world by storm.

There’s no Michael Jordan, so the young Seattle SuperSonics, who had a really successful regular season, looked on track to be next in line for the title, until the Nuggets shocked them in the first round. A bit of an overlooked part of that story is that they went on to take the Utah Jazz to seven games in the next series as well, coming extremely close to making the Western Conference Finals.

The extent that the legacies of Dikembe Mutombo, Mahmoud Abdul-Rauf, and Ellis would have been altered had the Nuggets got past the Jazz is an interesting question to pose. Despite their accomplishment, that team has mostly been forgotten, but that’s an issue for another day.

This takes us back to a few months before that, before anyone knew Denver was going to upset the Sonics, and before it was guaranteed they would even make it into the postseason. As of February 8, 1994, they were still fighting for their spot in the playoffs.

The Nuggets were trailing, playing against the contending Jazz, at home in the McNichols Sports Arena, eight points down with just 37 seconds left on the clock.

And this rookie power forward, coming off the bench – well, he does this.

That’s nine points in a couple decimals under nine seconds there. Better than what Reggie did, by one point and by 0.1 seconds, to be exact.

Why isn’t this a moment in sports history? Well, there’s the obvious answer: it’s not the playoffs. When Reggie scored eight in nine, it was the second round of the playoffs. But another obvious comparison would be Tracy McGrady scoring 13 points in 33 seconds, and that didn’t happen in the postseason. It was simply a regular season game, just like Rogers’ game here.

It could be that, a little over a year later, Rodney Rogers was traded to the Los Angeles Clippers and moved to small forward, where, while his raw numbers were the best of his career, he didn’t particularly thrive or come close to fulfilling his potential. His averaging of 15 points and 6 rebounds for a 17-win team was his best year, after all.

Or it could be this: he did it 20 seconds too early.

Just a few seconds later, Jeff Malone hit a mid-range shot from the right side to get the Jazz back in front. Denver still had a chance though. After a 20-second timeout, they had an opportunity to inbound it at half-court, with 12 seconds to score.

Robert Pack, the man who had collected the two steals and three assists that gave Rogers the chance to hit all those big shots, found the hot hand again, driving toward the hoop, but this time Rogers had his shot sent back by Tyrone Corbin.

By some miracle, Ellis pulled it down, but he lost possession going back up for the second-chance look, and the last five seconds fizzled out into one of the sloppiest loose ball fights in NBA history. Not a single player on either team was able to even get their hands on the ball until John Stockton came away with it after the buzzer had already sounded.

Not only was Rogers’ big moment ruined by Malone’s shot, and not only was it spoiled by his own failure to get off the last shot, but even the very aesthetic of the last few seconds – as the game faded into disappointment in simultaneously the most boring and frustrating way possible – took away from everything this moment could have, and should have, been.

This level of pain that only comes by unnecessarily ruining what should’ve been a historic moment feels something that only the New Orleans Saints should be able to pull off:

Sadly, just three years after retiring from the sport, Rogers would be gravely injured in a dirt biking accident and lost all movement below his shoulders. He is doing very well in life now though, considering his limitations. Two years after his accident, Rogers married his fiancée and, for the last few years, they have run his foundation, which focuses on helping people who suffer spinal cord injuries like he did, and a trailer/trucking company.