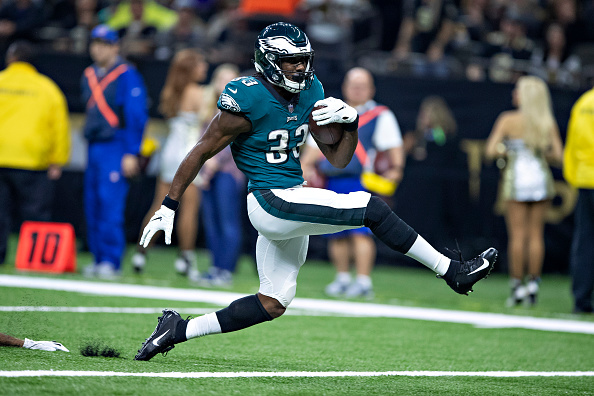 Obviously, the biggest story out of Week 11 was the buffet of fantasy points you got if you had anyone playing in the Monday Night game. Another big story was how bad the Eagles were against the Saints. We knew the Saints were going to put points but we all expected Philadelphia to hang with them somewhat. Both Marcus Mariota and Alex Smith, not only left their respective games with injuries, but they both outscored Carson Wentz in fantasy.

As bad as Wentz and the Eagles played on Sunday there was a bright spot in that game other than Alvin Kamara‘s 4th-and-7 touchdown pass from Drew Brees, and that would be Josh Adams.

Adams signed with the Eagles this year as an undrafted free agent in May. He was not drafted in your leagues before the season started and he may not have been drafted in your dynasty leagues either but he is worth a roster spot now.

Adams will most likely be the most sought after waiver wire pick this week next to Gus Edwards, especially for teams with Kareem Hunt and Todd Gurley on bye. But Adams usage seems to be beyond just a bye week pickup. He was on a season-high 55% of snaps in a game where the Eagles were getting slaughtered and tried drive after drive to get back into. You do not run your offense with an undrafted rookie in those types of situations unless he is the better running back.

Like Matt Breida and Aaron Jones, Adams is running with an amazing 6.1 yards per carry. He had 7.57 yards per carry against the Saints on Sunday and a score. Adams is the better running back on the Eagles, and the Doug Pederson knows it.

Watch him score the first touchdown of his career and the only touchdown for the Eagles on Sunday.

If you are lucky enough to snag Adams this week or if you saw something in him and picked him up before this week you now have a starting running back to flex with upside.

The Eagles backfield has been gross pretty much all season long, even when Jay Ajayi was “healthy”, but for the first time this season they seem to have their number one guy.