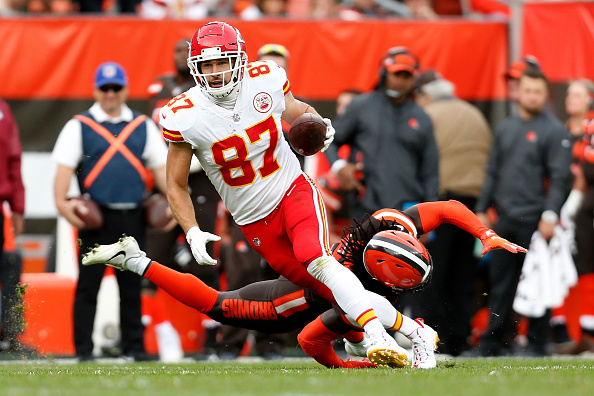 Week 11 in the NFL is here which means the fantasy playoffs are right around the corner. This week the Buffalo Bills, Cleveland Browns, Miami Dolphins, New England Patriots, New York Jets, and San Francisco 49ers are all idle. That means no LeSean McCoy, Nick Chubb, Rob Gronkowski or George Kittle. Let’s take a peek at the best of the rest in this week’s PPR rankings.

1. Todd Gurley vs. Kansas City-The consensus #1 back hosting a suspect Kansas City defense that just let David Johnson have his top outing of the season that his fantasy owners have been longing for.

2. Saquon Barkley vs. Tampa Bay-Could have a field day at home versus a team that is trending in the wrong direction.

3. Alvin Kamara vs. Philadelphia-Look no further than last Sunday night when Zeke Elliott lit up this defense on the road for nearly 200 yards.

4. Melvin Gordon vs. Denver-The Chargers are streaking thanks to the week in and week out consistency of Gordon.

5. Ezekiel Elliott @ Atlanta-If the Cowboys want to keep winning, they must feed the beast. Nick Chubb ran wild on Atlanta, and Zeke will attempt to have the same outcome.

6. David Johnson vs. Oakland-Johnson is coming off a 183 total-yardage performance in Kansas City. The Raiders defense will likely oblige to another similar output.

8. James Conner @ Jacksonville-Conner has been a top-5 RB all year and will continue it with Le’Veon Bell done for 2018.

9. Leonard Fournette vs. Pittsburgh-Fournette returned with a vengeance in Indy. Will try to repeat what McCaffrey did in Pittsburgh last Thursday.

1. Michael Thomas vs. Philadelphia-Until someone slows the Saints down, Thomas and company are mortal locks to blow up constantly.

2. Odell Beckham Jr. vs. Tampa Bay–Eli Manning found his enigmatic receiver for 2 scores on 11 targets in the Monday night win. This matchup looks just as juicy for the Giants at home.

3. Julio Jones vs. Dallas-Matty Ice remains a 300+ constant every week and he is finding Jones by connecting in the end zone for 2 straight ballgames.

4. Adam Thielen @ Chicago-He’s back from his bye and ready to begin another stretch of 100-yard-plus performances.

5. Tyreek Hill @ L.A. Rams-Sliced up the Cardinals secondary with 2 TDs and 137 combined yardage. A serious threat for more of the same in this offensive powerhouse.

6. Davante Adams @ Seattle-Finds a trip to the house almost every game. This duel should be no different in a must-win battle.

7. DeAndre Hopkins @ Washington-Guaranteed for double-digit targets nearly every time out. Will Demaryius Thomas cut into that with time to learn the playbook?

8. Antonio Brown @ Jacksonville-Lining up opposite of Jalen Ramsey is worth the price of admission. He tore up The Jags for 17 grabs, 2 touchdowns, and 189 yards in last season’s 2 meetings.

9. Keenan Allen vs. Denver-Two squads heading in different directions. Allen is peaking just like the entire Chargers are during their six consecutive wins.

10. Brandin Cooks vs. Kansas City-With Cooper Kupp gone, his targets, receptions, and scores will only go up.

1. Travis Kelce @ L.A. Rams-Without a doubt expect Kelce to bounce back nicely from a rather quiet 6 snags playing Arizona.

3. Greg Olsen @ Detroit-Seems like a favorite to find the end zone again after being held in check in the Pittsburgh loss.

4. Evan Engram vs. Tampa Bay-Everyone on New York’s offense is worth starting in this scintillating matchup versus a declining defense.

5. Eric Ebron vs. Tennessee-Ebron definitely makes his looks count, but Tennessee is difficult against tight ends so beware in this one.

6. Austin Hooper vs. Dallas-Destroyed the Browns with 10 receptions and a TD. Hooper is no Zach Ertz, but everyone saw what he did playing the Cowboys defensive backfield on Sunday.

8. Trey Burton vs. Minnesota-Still tough to trust on a weekly basis, but Mitchell Trubisky has been sharing the wealth lately.

9. Jared Cook vs Arizona-He’s still Derek Carr’s top weapon even though this offense has stalled the past few outings.