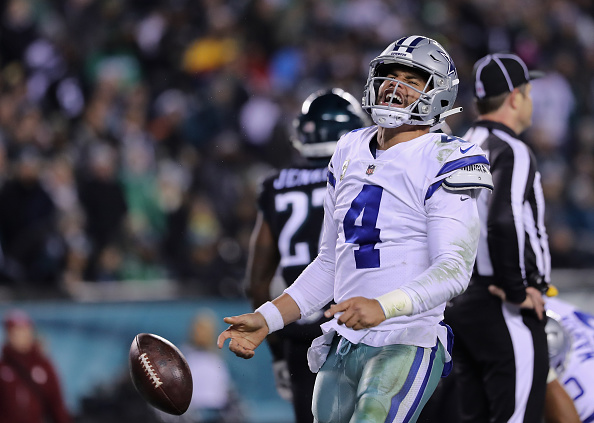 Ladies and gentlemen, and children of all ages who can read, we have reached the tipping point of the fantasy season. The playoffs are around the corner and we only have three more weeks to get our teams into postseason shape. The most important piece of advice that I have for all the fantasy owners out there is to be aware of your league’s trade deadline. There is no worse feeling than agreeing on that last trade that puts your team into championship contention and you go to propose it and instead you see those evil words “Deadline passed.”

That being said, this is an important waiver wire week because there were some injuries that are going to propel bench players into every-down starters, and now is the time to stash the handcuff RBs to your studs, so let’s get to it. The following waiver wire additions reflect a $100 Free Agent Acquisition Budget (FAAB).

Dak Prescott (DAL) – Dak has been better than expected when it comes to his fantasy production and you could do much worse if you need a solid streamer to get you past the final bye-weeks. He is averaging six carries per game over his last five games, and he has rushed for 33 yards or more in three of them. He faces the Falcons this week who are allowing QBs to pretty much do whatever they please. He is not worth any FAAB.

Marcus Mariota (TEN) – Mariota has been lights out the last two weeks. It appears that his early season woes were the product of the nerve damage in his elbow, and now that he is fully healthy, he has the Titans rolling. This week he faces the Colts who have been putting up points on everybody, so Mariota should have plenty of passing volume and even some opportunities on the ground. His schedule gets pretty rough after this week so do not look to him as a season savior. He is not worth any FAAB.

Lamar Jackson (BAL) – This pick up is pure speculation on the chance that Jackson is given the starting job if Joe Flacco were to miss time. Monitor this situation closely because there are some inside the Ravens’ organization that think Robert Griffin would get the start if Flacco were out. However, if it were Jackson, he is an electric runner and would have QB1 upside off of his rushing ability alone. Only consider Jackson if you are streaming various QB2s based on their matchups. He is not worth any FAAB.

Rashaad Penny (SEA) – Penny bust onto the scene this week with 12 carries for 108 yards and a TD. It is hard to trust the Seahawks backfield moving forward because it seems like it is never the player we expect who goes off. Pete Carroll also stated that Chris Carson should be back this week which muddies the backfield even further. However, Penny definitely earned more touches moving forward so he should be added in all leagues. It is worth noting that he takes a hit in PPR because he does not catch passes. He is worth $7-11 FAAB.

Elijah McGuire (NYJ) – McGuire is an excellent add at the RB position because it appears that he will be involved regardless of game script. He averaged 5.0 yards per carry last week to Crowell’s 2.7 and he is the preferred RB on passing downs. He is definitely worth adding and holding onto through his bye-week since the Jets are likely to give him more work in order to evaluate his long-term potential for the team. He is worth $7-11 FAAB.

Josh Adams (PHI) – Adams has been the best-looking and most efficient RB for the Eagles the last few weeks, and head Coach Doug Pederson stated that he will definitely get more work going forward. The backfield is a mess, similar to the Seahawks, but Adams could emerge as an RB2 for your fantasy squad if he continues to smash with is touches. He is worth $4-8 FAAB.

Theo Riddick (DET) – Riddick is one of the more talented pass-catching RBs in the league and he is about to see his role increase due to the injury to Marvin Jones. It was reported as a bone bruise in the knee, but as long as Jones is not 100%, Riddick will get plenty of opportunities in the passing game. He is worth an add in PPR leagues only and he is worth $5-9 FAAB.

Royce Freeman (DEN) – Freeman should be back this week after missing the last two games with a high ankle sprain. This season has been a complete bust for Freeman due to the emergence of Phillip Lindsay, but the Broncos have the best remaining schedule in regards to weak defenses versus the run. Lindsay is not exactly a big bruising RB, and if he were to get injured, then Freeman would be an extremely valuable player on your roster. He is worth $3-7 FAAB.

D’Onta Foreman (HOU) – Keep Foreman’s name in the back of your mind over the next few weeks. He has yet to be activated from the Physically Unable to Perform list, but when he is he could come in and challenge Lamar Miller for carries right away. We saw towards the end of last season that Foreman can be an explosive weapon so if you have a bench spot open or if you are a Lamar Miller owner then Foreman is a wide addition. He is not worth any FAAB.

Josh Reynolds (LAR) – Cooper Kupp has been lost for the season due to a torn ACL and now Josh Reynolds becomes a starting WR for the Rams. The offense is still going to run through Todd Gurley, Brandin Cooks, and Robert Woods, but Reynolds will have weekly WR3 upside. The week before Kupp returned from his first knee injury Reynolds had three receptions on five targets for 42 yards and two TDs. The volume will be low for Reynolds, but he is a must-add this week due to the offense he plays for. He is worth $7-11 FAAB.

Anthony Miller (CHI) – Miller was in this article last week, but luckily if you missed out he is still under 20% owned in Yahoo! leagues. He is an explosive WR, and he and Mitch Trubisky are clicking more and more each week. Allen Robinson is back to 100% so Miller’s upside is somewhat capped, but the way the Bears are slinging the ball week in and week out, Miller should be owned in all leagues. He is worth $10-15 FAAB.

Donte Moncrief (JAX) – Moncrief is the WR1 for the Jaguars and as such he should be owned in most leagues. The Jags are not a high volume passing offense so Moncrief is a gamble from week to week, but he is a physical WR with a nose for the end-zone who will see one on one coverage most of the time. He is an excellent WR stash for teams looking to build depth. He is worth $3-7 FAAB.

Keke Coutee (HOU) – Coutee should be back this week which will give Deshaun Watson a nice weapon in the slot. His upside is capped since Deandre Hopkins commands most of the targets, but he has excellent hands and will be a matchup nightmare for opposing linebackers and nickel cornerbacks. He is not worth any FAAB.

John Ross (CIN) – As long as A.J. Green is out John Ross will be a starting WR for the Bengals. While his target volume will remain relatively low, he is one of the fastest players in the NFL and he can break a long TD every time he touches the ball. Ross is worth an add if you need a home-run at WR this week, but just be aware that he could put up a zero just as easily as he could break a long TD. He is not worth any FAAB.

Danny Amendola (MIA) – Amendola is the only viable WR on the Dolphins at this point in the season. He has at least six targets per game in his last five games, and he topped 10 targets in two of them. His value is increased in PPR leagues since he rarely scores a TD, but he is still an excellent addition to teams looking to build WR depth. He is on a bye this week so do not add him if you are hoping to play him right away. He is not worth any FAAB.

Jeff Heuerman (DEN) – Heuerman shocked the fantasy world where he came out of nowhere to put down 10 receptions for 83 yards and a TD on 12 targets. This is very important to note since it was the first game without Demaryius Thomas, and he may find himself with a prominent role on this offense moving forward. He is also heavily utilized in the red-zone and has scored a TD in each of his last two games. Heuerman is the number one TE add this week. He is worth $3-7 FAAB.

Ricky Seals-Jones (AZ) – RSJ has seen his targets increase each week since Byron Leftwich took over play-calling duties, and he has emerged as a safety blanket for Josh Rosen. There has been a complete shift in offensive philosophy for the Cardinals and RSJ will be one of the beneficiaries. He is 6’5 and extremely athletic with above-average receiving skills, and he could find himself receiving 6-9 targets each week. He is not worth any FAAB.

Nick Vannett (SEA) – The return of Ed Dickson has opened things up for Nick Vannett. He is not going to be a weekly starter for your fantasy squad, but he has scored in back to back weeks and could come in handy over the next two bye-weeks. Russell Wilson loves to look his way in the red-zone and as such he should be on your streaming radar. He is not worth any FAAB.

Gerald Everett (LAR) – Everett is only worth considering if you have a deep bench. He has been an irrelevant member of the offense so far, but he may see more targets in the wake of Cooper Kupp’s injury. He is not worth any FAAB.

Defense/Special Teams: DO NOT SPEND FAAB.

Arizona Cardinals – The defense has improved right alongside the offense these last few weeks, and this week they get the Raiders who have thrown in the towel on 2018.

Pittsburgh Steelers – The Steelers defense has gotten better each week, and last week they made Cam Newton look like a rookie. This week they take on the Lions who are down two WRs and have given up 16 sacks over their last two games.

Baltimore Ravens, Denver Broncos and Houston Texans – These are top-fantasy defenses that are likely available since they were on a bye last week. I prefer Denver because they have the easiest remaining schedule out of the three, but any of them are weekly starts.