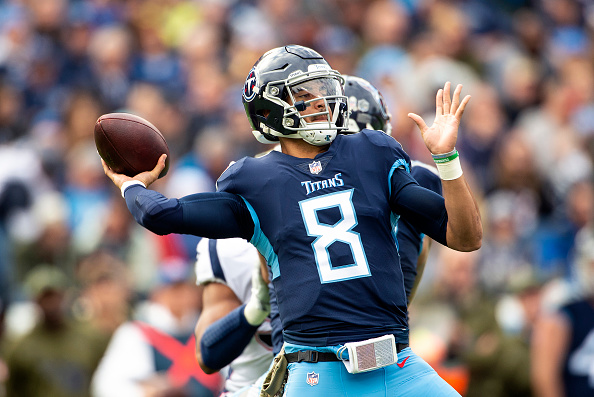 Week 11 will offer some new names to the streaming conversation of fantasy football. Streaming has been tough this year as most people who wanted to stream a quarterback every week probably settled on keeping their successful streamer long term like Mitch Trubisky, Jared Goff, and maybe even Andy Dalton to name a few. The tight end landscape has been brutal all year and with key injuries, more and more tight ends are surpassing the 50% owned percentage making them ineligible to be streamed.

There are undoubtedly some of you that will have better options than what appears in this article so be sure to check all the options on your waiver wire. Let’s check out the Week 10 performances before moving to Week 11 options.

Chris Ivory: Inactive. Hopefully, you were able to react to the news after this came out.

Marcus Mariota is playing extremely well right now. Back to back games with at least 21 points have catapulted Mariota back into fantasy relevance. The Titans have beaten the Cowboys and Patriots in consecutive games and in convincing fashion. This week Mariota has a good matchup with the Indianapolis Colts who are middle of the pack in terms of yards allowed and touchdowns allowed through the air. Mariota has thrown two touchdown passes in his past two games and also rushed for one. His go-to receiver, Corey Davis, is a target hog and a security blanket and helps make Mariota more appealing as a streamer. Mariota’s rushing ability also makes him an attractive streaming option. Mariota’s season-high rushing total for one game is 51 yards so he can get it done on the ground. Mariota is a strong streaming option this week against a Colts defense that he will likely have to throw on to keep pace with Andrew Luck.

Dak Prescott has been playing very well over the past four weeks. In three of his past four games, Prescott has at least 20 fantasy points with one game of 29.5 fantasy points. Prescott has benefited greatly from the addition of Amari Cooper because now he has a trusty outside weapon that he can target 10 times per game. That goes a long way for a quarterback. This week the Cowboys travel to Atlanta to face a struggling Falcons defense. The Falcons rank 27th in passing yards and passing touchdowns allowed. Prescott should be able to feed off of the Falcons poor pass defense that will surely be focused on stopping Ezekiel Elliott. Prescott, like Mariota, is strong on his feet as well scoring three rushing touchdowns in the past four games. Prescott is moving towards safer and safer streaming territory as the season progresses.

Vance McDonald is playing well and is barely eligible for this article as he is 47% owned right now in ESPN leagues. McDonald scored a touchdown last Thursday against the Panthers, which is no surprise because the Panthers are atrocious against the tight end. This week gives McDonald a new opportunity against a struggling Jaguars defense. At one point in the season, the only way to attack the Jaguars was in the middle of the field because of shutdown corners on either side of the field. Now A.J.Bouye is injured and Jalen Ramsey is not the same Jalen Ramsey. The Steelers should be able to move the ball rather easily against the Jaguars so McDonald should see near his normal production, if not better. In a matchup that was once scary, McDonald should not be steered away from solely because of the matchup anymore. Over the past four weeks, McDonald has been consistently involved in the offense to give you confidence starting him.

Chasing the points here. We don’t really know what will happen with Heuerman going forward but in the team’s first game without Demaryius Thomas, the tight end had 10 catches for 83 yards and a score. The departure of Thomas opens up a lot of opportunities for Heuerman to be a new go-to target for Case Keenum. The Chargers just lost Denzel Perryman for the season this week so there will be a void to fill for that defense, which could allow Heuerman to find himself open like in Week 9. Heuerman is as good as a bet as any tight end these days and is a solid streaming option following the hot hand approach.

Coming off a five-sack dominant performance against the Panthers, the Steelers defense will travel to Jacksonville to stop Leonard Fournette and the Jaguars. The Steelers are a top choice for a streaming defense this week because they rank fourth in rushing yards allowed and seventh in rushing touchdowns allowed. They will be able to contain Leonard Fournette enough to force Blake Bortles to throw the ball on their improving secondary. The Steelers are a fine option against Blake Bortles.

The Cardinals take on the lowly Oakland Raiders at home in Week 11. The Cardinals are 6th in the league in sacks with 29. The Raiders are the premier target for streaming defenses and with a defense as solid as the Cardinals it is a no-brainer pick here. The Cardinals defense gave a good effort against the Chiefs this week holding them to their lowest point total of the season and that game was on the road. The Cardinals defense is good, shadowed by the struggles of the offense all season.

Ryan Succop will piggyback the Titans offense against the soft Colts defense in a dome and should benefit from the Titans recent success.

Cole Beasley will face the Falcons who struggle mightily against slot receivers. The Cowboys might need to incorporate more pass catchers than usual to keep up with the high powered Atlanta offense benefitting Beasley. The emergence of Cooper has bode well for Beasley yet, but this is the first elite offense the Cowboys have faced since the trade.

David Moore who has been Seattle’s greatest touchdown threat has not scored in two games. Against the Packers this week, the Seahawks will need all hands on deck, which could mean another busy red zone day for David Moore. There could be some positive regression here for Moore who scored 12+ points in three games before scoring less than three points in the past two games.

Good luck in Week 11 everyone. It’s finally crunch time and I can feel it in the air. The playoffs are right around the corner. Who’s as excited as me?