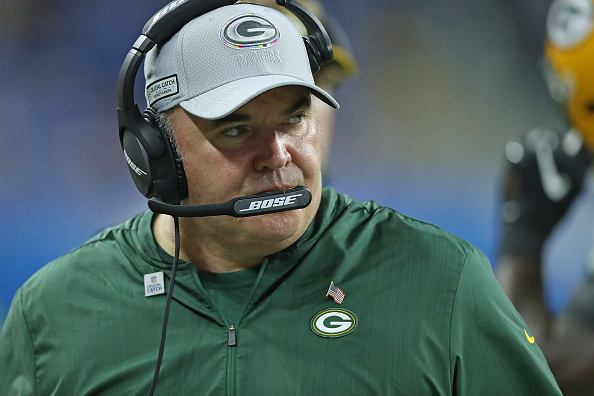 Mike McCarthy has been through the wars in Green Bay for 13 seasons, and over the last number of years, the talk about Aaron Rodgers being held back by McCarthy has gotten louder.

Back in 2016, the last time the Green Bay Packers were in a situation very much like this one, they were able to get out of it. That time, though, they needed to win their last six in a row, a huge ask without a doubt, but if anyone can pull it off twice it would be Rodgers. Mike McCarthy has normally had the Packers in the thick of the race come November and December, and it’s gotten to a point know where just being solid isn’t cutting it anymore. They aren’t even accomplishing that level of quality.

Where Do They Stand?

The Packers rise from the dead has to start Sunday against Miami. Make no mistake, it’s a must-win game. If the Packers beat the Dolphins, they would also need to win one of two road games against Seattle and Minnesota just to be 5-5-1. Outside of winning the division, the Packers will need to win at least nine or 10 games to just have a chance at a wildcard. So really the focus for McCarthy and the Packers has got to be getting that Division crown. If they can win out in their divisional matchups, that would be crucial. They would hold the division tiebreaker over both the Vikings and Bears, the top two teams in the division at present.

Last week the Packers lost their second-straight game against a top-flight team, in the New England Patriots, albeit they had both opponents on the ropes, but really that doesn’t help matters, given the self-inflicted mistakes they made in those games. It’s been one thing after the other. You could even go back to the Clay Matthews roughing the passer penalty, where it cost them a win early in the year over the Vikings.

At the end of the day, they’re 3-4-1 and are locked into third in the NFC North. Getting to the playoffs will likely require at least a clean sweep at home. That means wins over the Miami Dolphins, Arizona Cardinals, Atlanta Falcons, and Detroit Lions. Which given the teams, can certainly be done, but even losing one of those games is playing with fire.

Rodgers will obviously have to continue to carry the Packers if they’re to make a run at the playoffs. The good thing is he has one of the most productive receivers, Davante Adams, on his side. A new receiving weapon has also emerged in Marquez Valdes-Scantling, as the rookie wideout has cracked 100 yards receiving in two of the Packers’ last three games.

With Ty Montgomery traded away, Aaron Jones should get the bulk of the groundwork boosted by Jamaal Williams on third downs. McCarthy’s reluctance to run the football on a consistent basis really is mind-boggling. This sort of outright stubbornness is a big part of the issue. The Packers rank 29th in rushing attempts per game. That’s not going to do much to help take some of the stress off Rodgers’ shoulders or keep opposing defenses on their heels. After the team’s most recent loss at the hands of the New England Patriots, it’s clear that McCarthy and this offense need to change.

There is still a bit of light at the end of the tunnel to be sure, but the Packers have put themselves in a position where they can’t afford any more missteps. It’s time to put their skates on and get to work.

If McCarthy doesn’t turn things around fast, his number will very likely be up in Green Bay, and many would argue the time has come already.