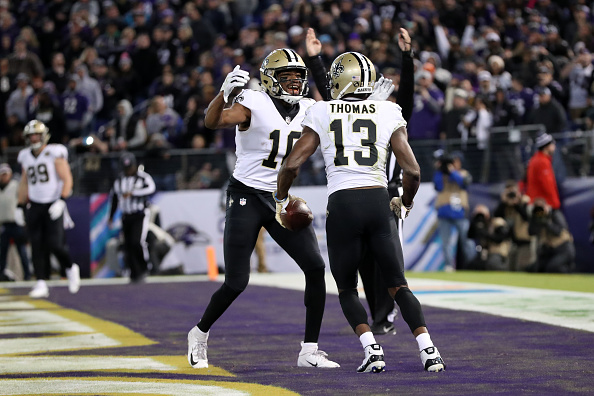 Week 10 in the NFL is upon us. This weekend the Denver Broncos, Minnesota Vikings, Baltimore Ravens, and Houston Texans are all idle on the schedule. That means no Phillip Lindsay, Adam Thielen, Alex Collins, or DeAndre Hopkins. So here is this weekend’s list of performers who have the most opportune chances to light up the fantasy scoreboards.

1. Kareem Hunt vs. Arizona-The Cardinals defense is allowing the most points to running backs, depending on which site you play fantasy on. Hunt should be the #1 RB on every ranking this week.

2. Melvin Gordon @ Oakland-The Chargers are hot and the Raiders defense is not. Gordon could explode for tons of fantasy points in this mouth-watering matchup.

3. Todd Gurley @ Seattle-Gurley scored 3 times in the first meeting on the road. Expect more of the same in this one on Sunday.

4. Alvin Kamara @ Cincinnati-The Bengals are giving up roughly 6 catches a game to opposing runners. Kamara can garner more than that and has found the end zone 6 times in his last three.

5. Saquon Barkley @ San Francisco-Barkley is coming off a bye and will see plenty of targets come his way on Monday night.

6. James Conner vs. Carolina-Conner is proving that he can be a top flight back in this league weekly. This collision on Thursday night can be a tricky one for him, but he is still a must-start at home.

7. Ezekiel Elliott @ Philadelphia-His club is a mess right now, but Zeke is way too talented to become irrelevant. Dak Prescott will continue to find ways to get their best playmaker the football.

8. Tevin Coleman @ Cleveland-Coleman is coming off his best performance against a tough Washington run defense. On paper, this one looks much better than it did going into Washington.

9. Jordan Howard vs. Detroit-Howard has been coming on as of late and this looks like another enticing opportunity to ride his train forward.

10. Matt Breida vs. New York Giants-Breida will take over most of the workload with Raheem Mostert on IR. He’s got the capability to be a solid #2 option at the position on Monday night and moving forward.

1. Michael Thomas @ Cincinnati-After his eye-popping 211-yard showing, Thomas seems poised for more of the same in Cincinnati. Brees will likely be targeting Thomas with even more confidence following the major win over Los Angeles.

2. Julio Jones @ Cleveland-Jones finally took it to the house at Washington. Now, Browns cornerback Denzel Ward is dinged up and may not play against Atlanta. That will only make this just a little bit easier for Julio and the Falcons.

3. Davante Adams vs. Miami-As long as Aaron Rodgers is healthy, Adams will benefit with targets galore. Look for the consistency to grow versus the Dolphins.

4. Keenan Allen @ Oakland-Allen managed 8 snags for 90 yards in the week five victory. He and all the Chargers are in heavy favor to rack up the points in Oakland.

5. Antonio Brown vs. Carolina-The Panthers held Mike Evans to one reception a week ago. Ben Roethlisberger is far too reliant on Brown to allow that to happen, especially at home on Thursday night.

6. Odell Beckham Jr. @ San Francisco-Beckham will be lined up with Richard Sherman most of the night, but Eli Manning still gets the ball to his premiere pass catcher.

7. Tyreek Hill vs. Arizona-As always, Hill is just one play away from taking it to the house on a deep bomb. This week shouldn’t be any different.

8. Mike Evans vs. Washington–Ryan Fitzpatrick targeted Evans 10 times in the loss to Carolina. The same routine is expected in this game with more than just reception for Evans as well.

9. Robert Woods vs. Seattle-Hauled in 5 passes for 92 and ran it twice for 53 yards in the early season win at Seattle.

10. Cooper Kupp vs. Seattle-Notched 6 for 90 and a TD in week five. Kupp is a near certainty to find the end zone almost weekly.

1. Travis Kelce vs. Arizona-Kelce and company are in for a massive fantasy outlook in what may just be a one-sided affair.

2. Zach Ertz vs. Dallas-Ertz has been a one-man wrecking crew this season. Although the Eagles traded for Golden Tate, Carson Wentz will not hesitate to look for his security blanket on most passing plays.

3. George Kittle vs. New York Giants-Kittle is becoming a top-tier tight end no matter who is throwing him the ball.

4. Rob Gronkowski @ Tennessee-If Gronk can go, then he starts no matter what. The Patriots are on bye in week 11 so Gronk may sit this one out again.

5. O.J. Howard vs. Washington-He has three trips to the house over the last two contests. Howard is entering must start territory at a slim tight end position.

6. Greg Olsen @ Pittsburgh-Three straight games with a touchdown going into this monstrous showdown.

7. David Njoku vs. Atlanta-Cleveland needs to get Njoku more involved on a consistent basis. Njoku has all the tools for a breakout under the new regime, most notably in this tilt playing an injury-plagued secondary.

8. Trey Burton vs. Detroit-If Burton can muster a score or about 6 snags, then his fantasy owners ought to be thrilled from this up and down performer.

9. Jared Cook vs. Los Angeles Chargers-Oakland is struggling in every facet right now. Cook can still be a reliable tight end if Derek Carr gets enough time in the pocket to find his mismatch big man.