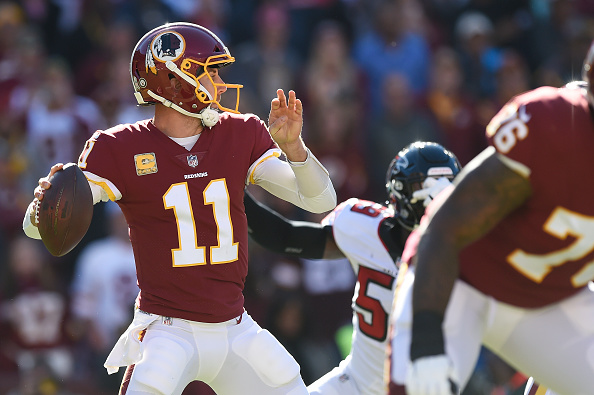 At the halfway point in the NFL season, the Redskins have shocked everybody by sitting at the top of the NFC East division with a 5-3 record. However, the NFC East is nothing to brag about, to say the least. Watching this division race unfold is like seeing a brand new Lamborghini sitting outside just waiting to be driven by somebody. However, the Lamborghini is locked so you can’t open it and you just walk away leaving the beautiful car to collect dust. What these teams do not know is that the keys to this prize are in their own pockets as we speak, it is theirs for the taking.

The Washington Redskins have been the little brother that nobody takes seriously in this division for a long time now, so to see the success they are having is surprising many. I am here to tell you why the Redskins are still the same team we all know and love to laugh at. Washington has made it very clear what their identity will be as a team, run the ball and play great defense. Adrian Peterson has been the engine that is making this offense go. In the three games that the Redskins have lost, Peterson rushed for 20 yards or less, causing an average of only 14 points per game for the offense. During games the Redskins have won, he ran for at the least 96 yards causing an average of 23 points per game. The fact is, the recipe for defeating the Redskins is very simple, stop the super-human old man from running the football successfully. The fact is that the Redskins quarterback, Alex Smith, has shown throughout his career that if he does not have a consistently solid rushing attack his success becomes very unlikely. Just take a look back at his final season with Kansas City. When Kareem Hunt was accumulating monster numbers they won. However, when Hunt’s production slowed down, they began to struggle mightily.

Washington has also shown that when facing top contender teams in the NFL, they will fold like my favorite beach chair. When facing teams with a record of at least .500 or above they are currently 1-2. Yes, they did beat a red-hot Panthers team, however, it was a very sloppy game that the Panthers let slip away. Looking at the other two losses are totally different stories. Against the Saints and the Falcons, the Redskins were totally outclassed both offensively and defensively. They let up an average of 469 total yards and an average of 40 points during these games. These are very frightening numbers since defense is what the Redskins have prided themselves on over this season. Those kinds of numbers are inexcusable if you are attempting to win a division and contend with the top teams in the playoffs.