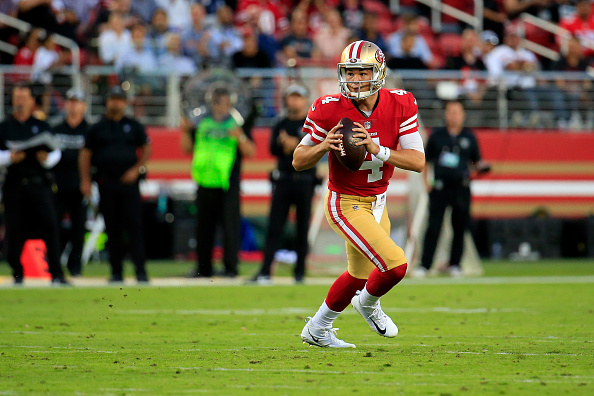 We are officially one month away from the fantasy playoffs so it is time to get in those waiver wire pickups and make those trades that are going to launch your team into the playoffs with a vengeance. There are still some high profile players available that need to be scooped up this week so do not miss out on what could be your last opportunity to add some weekly starters. The following waiver wire adds reflect a $100 Free Agent Acquisition Budget (FAAB).

Marcus Mariota (TEN) – Mariota is finally starting to come out of his slump and fantasy owners could not be happier. He is benefiting from the re-emergence of Dion Lewis, and it appears he is finally over the nerve issue in his elbow as he carved up a stout Cowboys’ secondary with two passing TDs that should have been three. He also added a TD on the ground which is another reason Mariota is an exciting addition. If he is going to have a few more designed runs to make up for the porous play of Derrick Henry, then Mariota will have a safe floor should you find yourself in QB turmoil in the near future. He is worth $7-11 FAAB.

Baker Mayfield (CLE) – Mayfield looked sharp in his first game under the interim coaching staff. They are simplifying the playbook and scheming the offense around Mayfield’s strengths which is only going to improve his numbers. Also favoring Mayfield as a decent add is the fact that the Browns will typically be trailing this year, which means Mayfield is going to have to bring them back late in games. Under a simplified offense, with elite playmakers surrounding him, Mayfield will certainly have a few top-12 finishes in the near future. He is worth $5-7 FAAB.

Nick Mullens  (SF) – Mullens made his NFL debut last week and he came out swinging as he threw for 262 yards and three TDs. He has already been named the starter for this week’s matchup against the Giants, and he will likely keep the job if he can consistently play at a high level. Assuming he plays well against the Giants, he will be rewarded in week 12 with the Buccaneers. Mullens just might be the answer to your bye-week blues. He is not worth any FAAB.

Duke Johnson (CLE) – Duke Johnson is a favorite of new offensive coordinator Freddie Kitchens, and it showed on Sunday as he racked up nine receptions for 78 yards and two TDs. Kitchens is the former RB coach and he will get Nick Chubb and Johnson heavily involved moving forward. Duke has always been touted as a talented RB, but the problem was that he was improperly used and underutilized up until this point in his career. Now with Kitchens calling the plays, expect Duke to see at least six to eight targets per week and be a weekly RB2 with upside in PPR. He is worth $21-31 FAAB.

Josh Adams (PHI) – Adams could come out of the bye as the Eagles’ primary RB. There is a dire need for production at the position since Jay Ajayi tore his ACL, and Adams is easily the best-looking runner between himself, Wendell Smallwood and Corey Clement. It is complete speculation as to how the touches will be divided, but Adams is a must-add if you have the roster spot on the chance that he takes over the RB1 role on the team. This is a pick-up where we are trying to be one week ahead of everyone else, so add him now for cheap so you don’t have to break the bank next week if he breaks out. He is worth $3-5 FAAB.

Elijah McGuire (NYJ) – In his first game back from Injured Reserve, McGuire put down a decent performance as he rushed for 30 yards on seven carries, and added three receptions for 37 yards. Isaiah Crowell is clearly not the answer, evidenced by his failure to surpass 50 yards against a bottom-three rush defense so one or two more losses might have the Jets looking into the future to see what they have in their young guys. I expect McGuire’s role to grow each week, and come playoff time, he just might be the steady RB2 you have been looking for. He is worth $5-7 FAAB.

Mike Davis (SEA) – Chris Carson is the man in Seattle, but unfortunately he can never stay healthy for an extended period of time. Enter Mike Davis. It is clear that the Seahawks completely regret using their 1st-round pick on Rashaad Penny because even when Carson is out, Penny is hardly involved. This opens the door for Mike Davis to shine. After Carson went down on Sunday, Davis went for 62 rush yards and added seven receptions for 45 yards on eight targets. Given the extremely run-heavy approach of the Seahawks, Davis is a must-add in all formats. He is worth $6-9 FAAB.

Jalen Richard (OAK) – Richard is a must-add in PPR leagues only. He should be heavily used for the rest of the season because the Raiders are almost guaranteed to be trailing in the remainder of their games, but he does not see many carries which hurts his value in half-PPR and standard leagues. Expect Richard to see a floor of six to eight targets each week. He is worth $6-9 FAAB in PPR leagues.

Theo Riddick (DET) – Riddick is healthy again and the Lions did not hesitate to use him. He finished with seven receptions for 36 yards on eight targets, and while those numbers are pretty mediocre, he has a decent floor in PPR leagues when the Lions are expected to face negative game scripts. Riddick should only be considered in deep PPR leagues as a bye-week replacement because unlike Richard, he has Kerryon Johnson to compete with who also sees work in the passing game. He is not worth any FAAB.

Marquez Valdez-Scantling (GB) – It was just announced that Geronimo Allison has been placed on Injured Reserve, officially ending his fantasy season and opening the door for standout rookie Marquez Valdes-Scantling to take over on the outside opposite Davante Adams. Valdes-Scantling has tremendous talent and he earns more of Aaron Rodgers’s trust each week. This could the pickup to propel your squad into the fantasy playoffs. He is a must-add in all formats and is worth $25-31 FAAB.

Anthony Miller (CHI) – Miller has been an exciting surprise for the Bears, leading them in targets the last three weeks. It seems he is becoming more comfortable with Mitch Trubisky, and in Allen Robinson’s absence, Miller has been Trubisky’s first read. I think Miller has surpassed Taylor Gabriel in fantasy value, and he may become an every-week WR3 if his target volume continues. He is a must-add in all formats and is worth $11-17 FAAB.

Adam Humphries (TB) – That’s two games in a row where Humphries has been a significant factor on offense. The Buccaneers have a historically poor defense so they are likely to see positive game scripts for their WRs every week, and lately, Humphries has jumped up in the pecking order. It remains to be seen whether Humphries will be involved from week-to-week, but if Ryan Fitzpatrick continues to feed him then he will be a fringe FLEX in PPR leagues moving forward. He is worth $3-7 FAAB.

Maurice Harris (WAS) – Harris came out of nowhere on Sunday to lead the team with 10 receptions for 124 yards on 12 targets. The Redskins have lost Paul Richardson for the season so Harris may find himself in a starting role sooner rather than later. If Alex Smith continues to feed Harris the way he did on Sunday, then Harris could be the waiver wire WR that propels fantasy owners to a championship. This situation is worth monitoring closely to see if Harris remains as involved when Jamison Crowder returns, but he is definitely worth a pickup in the meantime. He is worth $3-7 FAAB.

John Ross (CIN) – Ross has been a colossal bust since he was drafted in the 1st-round. The Bengals refuse to develop ways to get him involved until this point, but with the injury to A.J. Green expected to sideline him at least two weeks, the Bengals will likely have no choice but to get Ross involved. He is an explosive athlete that can change any game around in an instant, and if he going to see a decent amount of targets and/or rushing opportunities in the next few weeks, then he is going to help fantasy owners bring home a W in the weeks leading into the playoffs. He is worth $3-7 FAAB.

Jeff Heuerman (DEN) – Heuerman lit the fantasy world on fire this week on his way to 10 receptions for 83 yards and a TD on 11 targets. This is an important development considering the disaster TE has been this season because he may see a steady increase in targets moving forward due to the departure of Demaryius Thomas. Case Keenum is the perfect QB for a low-end TE1 because he mainly operates within 20 yards of the line of scrimmage and that is mainly where Heuerman runs most of his routes. If you are streaming TE from week-to-week like most of us, Heuerman might be the answer to our prayers. He is worth $5-9 FAAB.

Jack Doyle (IND) – Doyle returned from injury two weeks ago to lead the Colts in targets and receptions. Now the Colts are coming off of their bye-week which has given Doyle a little more time to reacclimate himself into the offense. If Doyle can stay healthy, he has an excellent floor in PPR leagues due to his chemistry with Andrew Luck. Further, if he can eat into Eric Ebron’s TD production, then he could become a weekly start at a position that teams are desperate to fill. He is worth $7-11 FAAB.

Christopher Herndon IV (NYJ) – Herndon led the Jets in receiving this week with a season-high 62 yards, and he seems to have a strong connection with Sam Darnold. He did not score a TD this week, but he was still the most productive player on the field and his snap count went up to over 60%. Herndon is an excellent choice as a bye-week fill-in this week against Buffalo. He is not worth any FAAB.

Los Angeles Chargers – This week the Chargers face the Raiders who for all intents and purposes have completely given up. The entire team will put up fantasy points this week, including their defense. Never spend any FAAB on a defense.

New York Jets – This week they face the Bills. Not much more needs to be said, but it is possible the Bills could be forced to start Nathan Peterman once more, making the Jets the number one streaming defense this week. Even if Derek Anderson returns, it is just as tasty of a matchup. Never spend any FAAB on a defense.