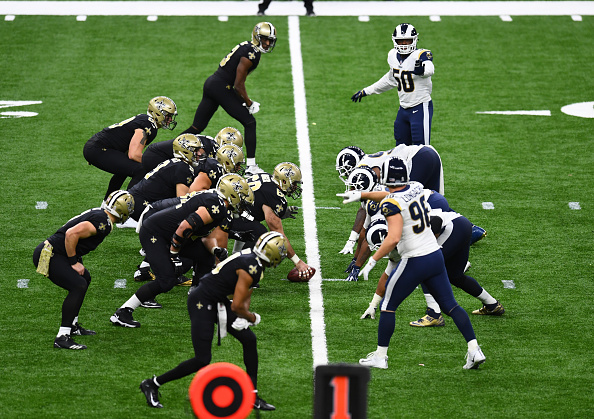 A recap of each game from the past week and a look ahead to who your team will be facing in week 10.

Matt Ryan carved up the defense for 350 yards and four strikes in a 38-14 rout of the Washington Redskins that extended their winning streak to three games. The Falcons improve to 4-4, on the flipside Washington snap a three-game win streak and drop to 5-3.

Julio Jones caught seven passes for 121 yards including a 35-yard screen pass, with just under four minutes left that sealed the victory.

Adrian Peterson was held to 17 yards on nine carries a week after rushing for 149 yards versus the New York Giants. Alex Smith was 30-46 for 306 yards, along with a touchdown and an interception.

The Redskins travel to Tampa Bay next week. Atlanta visits Cleveland to take on the Browns.

The Vikings overcame a mediocre offensive performance to overcome the Lions by a final score of 24-9. Minnesota’s record rises to 5-3-1 on the season, and are hot on the trail of the Division-leading Bears.

The defeat drops the Lions to 3-5 on the season. The Vikings defense came to play sacking Matthew Stafford 10 times. Danielle Hunter battered the Lions Quarterback, picking up 3.5 sacks, and 10 tackles, even returning a Stafford fumble recovery for a 32-yard touchdown.

Kirk Cousins was 18-of-22 passing for 164 yards with a touchdown an interception. Dalvin Cook erupted for a 70-yard run in the second quarter that set up Minnesota’s second touchdown of the game, that was his main rushing output, finishing with 89 yards.

Minnesota will be on the bye week. Detroit will be in Chicago for a big divisional matchup.

Ben Roethlisberger threw two touchdown passes and ran for a score to help the Pittsburgh Steelers beat the Baltimore Ravens 23-16. The victory gives the Steelers a 5-2-1 record at the midway point of the season.

James Conner finished with 107 yards on 24 carries, making up for a 19-yard rushing performance in the earlier season meeting.

The loss drops the Baltimore Ravens to 4-5, they will more than likely need to finish off the season 6-1, to have any real shot at making the playoffs.

Alex Collins cut the Steelers lead down to 20-13 running it in from the 1-yard line, deep in the third quarter, the Ravens only offensive touchdown. The teams traded field goals in the fourth quarter.

Pittsburgh has a short week, they’ll meet the Panthers on Thursday night. Ravens have a chance to lick their wounds, there on the bye.

Kansas City’s offense continues to motor along at an unstoppable pace, recording a 37-21 win on Sunday over the Cleveland Browns. The Chiefs increase their record to 7-1, keeping a one-game lead on the 6-2 Chargers in the AFC West. Cleveland lost its fourth straight, dropping to 2-5-1.

Patrick Mahomes passed for 375 yards, and three touchdown passes, two of them to stud Tight End Travis Kelce. Kareem Hunt got in on the action, chipping in two rushing touchdowns to go along with a receiving score. Both players combined for all five of the Chiefs touchdowns.

On the Browns side, Baker Mayfield threw two TD passes to Duke Johnson along with 297 yards and one interception. The closest they came in the game was putting together a 75-yard drive finished off by Nick Chubb‘s 3-yard TD run, cutting the Chiefs lead to 14-10.

Kansas City will next host Arizona at Arrowhead. Cleveland will take on Matt Ryan and the Atlanta Falcons.

Brock Osweiler didn’t win this game for the Dolphins, but he did well enough not to give it away, beating the Jets 13-6 in an ugly defensive showdown. Win’s a win though as Miami improves to 5-4, and still, have an opportunity at the playoffs.

The Jets record goes to 3-6, their playoff hopes are all but gone with this loss. Sam Darnold was picked off on three of his last four possessions.

Osweiler was 15-of-24 passes for 139 yards with four sacks. Frank Gore had a ho-hum day rushing for 53 yards on 20 attempts, but the one bright spot was moving past Barry Sanders for sixth place all-time in yards from scrimmage with 18,190 yards.

The Dolphins head to Lambeau to play a desperate Packers side. The Jets look to get back on the winning track, hosting a hapless Buffalo side.

Ryan Fitzpatrick again lived up to his Fitzmagic moniker, bringing his team back from 35-7 down to within a touchdown, with just a quarter to spare. The Panthers, in the end, managed to come away with the 42-28 win, pushing their record to 6-2. The Buccaneers drop to 3-5 and are virtually out of the playoff picture at this point.

Christian McCaffrey led the way for the Panthers, rushing for 79 yards to go with his 78 receiving yards, along with his two rushing touchdowns. Cam Newton had a solid afternoon, connecting with Greg Olsen and Curtis Samuels for touchdowns.

As for the Buccaneers, Ryan Fitzpatrick finished the day with 243 yards passing to go along with 4 touchdowns and two interceptions. Wide Reciever Adam Humphries had a very solid day, he caught 8-of-8 targets for 82 yds along with two touchdowns.

Carolina will visit Pittsburgh for the Thursday night clash. Tampa Bay will host the Washington Redskins.

The Seahawks got one final chance to score on a promising game-tying touchdown, luck wasn’t on the Seahawks side though, Russell Wilson‘s pass was tipped, bouncing off David Moore‘s chest in the end zone and costing the Seahawks the 25-17 loss to the Chargers.

With the victory, the Chargers keep pace with the AFC West-leading Kansas City Chiefs. The Seahawks hold down second in the NFC West, moving to 4-4.

Phillip Rivers passed for 228 yards along with two touchdown passes and zero interceptions. Keenan Allen had a season-high 124 receiving yards.

Russell Wilson had 235 yards passing with two touchdowns and a pick. Underused tight end Nick Vannett added a touchdown reception to go along with 55 yards in the air.

The Chargers have the Raiders Week 10, on the road. Seattle will meet up with the juggernaut Rams.

Brandon McManus missed a 51-yard field goal as time expired, allowing the Texans to escape Denver with a very slim 19-17 win over the Broncos. The Texans get their sixth win in a row and head into the bye week on a positive note.

DeShaun Watson locked on Demaryius Thomas three times, including back-to-back grabs for 31 and 18 yards on Houston’s opening drive. Watson finished with 213 yards passing and a pair of TDs, and DeAndre Hopkins contributed with 105 yards and one score on the day.

Case Keenum completed 290 yards and one touchdown, this being his first game of the season without tossing an interception. Running back Devontae Booker picked up his first touchdown of the season, on a 14-yard run into the end zone. Erasing a previous fumble that ultimately resulted in a Texans score.

Both Denver and the Houston Texans will have the week off.

Drew Brees threw four touchdown passes on the day in a 45-35 dogfight, finally putting the Rams unbeaten streak to rest, dropping them to 8-1. The Saints keep a game ahead of the hard-charging Panthers, improving their record to 7-1, extending the streak to seven.

New Orleans led 35-14 late in the second quarter. Early in the fourth quarter, the Rams rallied to tie it, with Goff hitting Cooper Kupp on a 41-yard pass play. But that was as far they could push it.

Alvin Kamara finished with 116 yards and three touchdowns on 23 touches. Michael Thomas not to be outdone amassed 211 yards against a soft Rams secondary, including the 72-yard hookup with Brees that resulted in the insurance touchdown with 3:52 remaining.

New Orleans goes on the road to Cincinnati. The Rams host the Seattle Seahawks.

Green Bay had the New England Patriots right in their crosshairs. With the game tied at 17 all to begin the fourth quarter, the Packers systematically moved the ball down to the Patriots 34-yard line. The Packers fortunes completely went the opposite way after that. On the very next play, Aaron Jones coughed up a fumble after a six-yard scamper, the Pats recovered.

Tom Brady wasted no time, moving the Patriots up the field in a timely fashion, and then finishing off the drive with James White running it in for a 1-yard touchdown. The Patriots put up another score on a Josh Gordon 55-yard reception, as the Patriots won out 31-17.

The Patriots improve to 7-2 and look to be in solid control of the AFC East. On the Packers side of things, they know to drop 3-4-1, needing a huge bounce-back game next week.

Next week, New England heads out to Tennessee to face the Titans. Green Bay will be back home, looking to rebound against the Miami Dolphins.

The Titans broke a three-game losing streak straightening out the struggling offense for at least a game. They’re now a game out of an AFC playoff spot. Dallas drops to 3-5 on the season.

Marcus Mariota capped off his night with 240 yards along with two touchdown passes. Running back Dion Lewis put up 122 yards of total offense leading the Titans in both receiving and rushing yardage, to go along with a touchdown through the air.

Dak Prescott had a pretty rough night, he was sacked five times threw a pick and had a fumble. Amari Cooper, caught 58 yards and a touchdown in his Cowboys debut, leading the team in both receptions and receiving yards

Dallas goes on the road to Philly for what should be a huge divisional battle. The Titans will host New England.