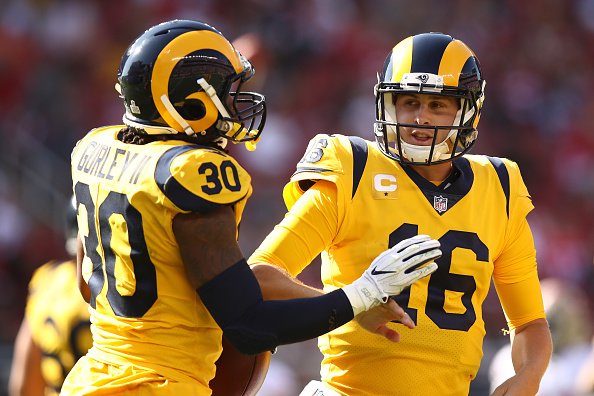 The Los Angeles Rams 8-1 start is their best start since the 1969 season. This team has been special this season. A lot of credit goes to the spread it around nature of their offense.

It is no secret that the Rams have one of the most creative offenses in the league under head coach Sean McVay. The offense brings out the full potential of each player within it. That is one of the reasons why the Rams have three players currently on pace to finish the season with over 1,000 receiving yards.

Brandin Cooks leads the team in receiving yards with 757. Then Robert Woods is second with 743 and Cooper Kupp is third with 527. Despite the increasing dependence on passing the ball, the last 1,000 yard receiving trio was the Arizona Cardinals in 2008.

McVay spoke about his unique group of receivers during media availability:

” I think it’s one of those unique things where you get a chance to observe and you see three great players positively push each other in a supportive and encouraging way where there’s a competition, but it’s healthy where it’s about them as a unit. “

This speaks to the all-around versatility of the Rams offense and lack of predictability. In the offseason, the Rams gave Cooks a five-year $81 million contract with $49.4 million guaranteed.

Cooks is the second-highest paid player on the team behind only Aaron Donald. Normally the players with the big contracts are the primary targets on a team. However, with this Rams team, it is different.

Cooks’ 60 targets are second to Woods with 74. Rams quarterback Jared Goff has taken whatever the defense has given him rather than forcing it to a primary target. It is one of the reasons Goff is having an MVP caliber season.

This season he has thrown for 2,816 yards, 20 touchdowns and 6 interceptions on a 67.9 completion percentage. McVay credits Goff for how well he has been able to spread the ball to their weapons:

“Jared’s done an excellent job spreading the ball around, getting those three involved specifically.”

This team’s versatility gives it a look that many teams struggle to prepare for week in and week out. That is why it feels like any player can do damage for the Rams each week. They are not predictable by design, which is a credit to their players and the coaching staff.