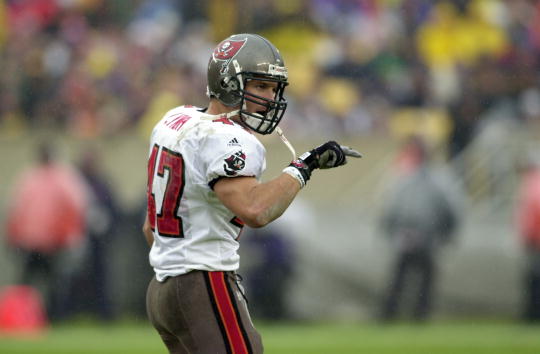 It feels like a lifetime ago, but before he was the general manager for the 49ers and before he was a color commentator for the Fox network, John Lynch was one of the hardest-hitting SOBs in the NFL.

When the NFL did a countdown of the most feared tacklers, Lynch was number ten on the list. He wanted to hurt you. If you came into his yard, he was going to make you pay. He almost knocked out John Allred, tight end for the Bears. Allred also happens to be Lynch’s brother-in-law, so if he’s going to knock out his own brother-in-law, imagine if you’re not family.

Drafted in the third round out of Stanford during the 1993 NFL draft, Lynch spent the first 11 years of his career punishing wide receivers, with the Tampa Bay Buccaneers. He would earn a Super Bowl victory during Super Bowl XXXVII when the Buccaneers under head coach Jon Gruden defeated the Oakland Raiders, Gruden’s former team, 48-21.

Lynch would comment how they knew exactly what plays the Raiders were going to run due to the fact they didn’t change any of the calls or formations that Gruden himself installed. Unfortunately, due to the salary cap, Lynch would be released by the Bucs in 2003, one year after winning the Super Bowl.

He then spent the next four years killing wide receivers for the Denver Broncos. He almost made another Super Bowl appearance in 2005 but a loss to the Pittsburgh Steelers would end their endeavors. He was granted his release in 2008 and would retire after spending just a few weeks with the New England Patriots.

Trading in the Hits for the Mic and the Front Office

He spent the next eight years as the color commentator for Fox. Then in January of 2017, in what felt like a move out of left field, he was named the general manager for the 49ers and signed a six-year contract along with newly acquired head coach Kyle Shanahan.

John Lynch has spent the last two years trying to revamp the 49ers by turning over the roster and trying to return them to their winning ways. His biggest accomplishment as general manager was acquiring franchise quarterback Jimmy Garoppolo from the New England Patriots for only a second-round pick last year.

There was actually a funny story that came out where Lynch contacted Patriots head coach Bill Belichick prior to the beginning of last season trying to acquiring Garoppolo in a trade, but at the time Belichick was not interested in trading the future 49ers’ quarterback. Lynch would call Belichick back and asked if he would trade him, Tom Brady.

John Lynch has been a finalist for the Pro Football Hall of Fame for five straight years but has failed to make the cut. Some would argue he is being robbed the right to join those who have already been inducted before him in Canton. During his career, he has amassed 1,054 tackles including 736 solo tackles. 28 tackles for a loss, 13 sacks, and 26 interceptions. He has been inducted into the Buccaneers Ring of Honor and the Denver Broncos Ring of Fame.

But as impressive as his stats are, it’s the punishing hits that, if he played nowadays, would get flagged each and every time. Richard Sherman said if Lynch played right now, he would probably be banned by the NFL. But lucky for him and lucky for those who loved to watch him play, he wasn’t drafted 20 years later.