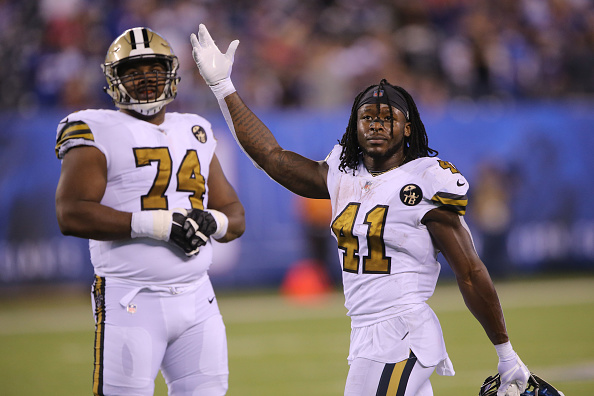 Week 9 in the NFL is upon us. Cincinnati, Indianapolis, the New York Giants, Philadelphia, Arizona, and Jacksonville will all be idle for the busiest bye week of the fantasy season. That means no A.J. Green, Eric Ebron, Saquon Barkley, Zach Ertz, David Johnson or a banged up Leonard Fournette. So here’s the latest list of top 10 runners and pass catchers who can help fill in for these bye week superstars.

1. Alvin Kamara vs. L.A. Rams-Kamara’s presence should be felt heavily in the premiere game of the week. Drew Brees will throw his way a boatload when Kamara comes out of the backfield in what might be a passing fest.

2. Kareem Hunt @ Cleveland-The Browns cannot stop opposing running backs. They rank near the bottom of the league and everyone knows how devastating the Kansas City offense can be.

3. Ezekiel Elliott vs. Tennessee-Elliott is poised for a comeback game at home. With the addition of Amari Cooper, the Cowboys look like a more balanced attack that can give defenses fits.

4. Todd Gurley @ New Orleans-The Saints have been tough on running backs, but Gurley is on a roll. Can definitely see him putting up a couple of scores the way the Rams use him.

5. Christian McCaffrey vs. Tampa Bay-The Carolina back found the end zone twice against a stiff Baltimore test. Just envision what he can accomplish hosting Tampa who’s given up 5 TDs to runners over the last 3 contests.

6. Adrian Peterson vs. Atlanta-Peterson stomped on the throats of New York a week ago. The Redskins find themselves at the top of the NFC East and a major reason is that of the unrelenting and ageless Adrian Peterson.

7. James White vs. Green Bay-The Brady/White connection is intensifying. White feels like a lock to get targeted at least 15 times through the air, but not much on the ground.

8. Nick Chubb vs. Kansas City-A #1 type RB in this home tilt versus a porous Kansas City D. Chubb’s a young talent on the rise that might have his best outing to date.

9. Latavius Murray vs. Detroit-This is an enticing matchup for the entire Vikings team. Murray will most likely get ample opportunities to produce fantasy starter numbers in this one.

10. Melvin Gordon @ Seattle-Gordon will get his chances in a rough environment. Therefore owners ought to temper their expectations if starting Gordon in Seattle.

2. Michael Thomas vs. L.A. Rams-Feels like a 13-catch, 150-yard type of performance with no Aqib Talib and Marcus Peters not playing to his high capabilities.

3. Julio Jones @ Washington-Second in the NFL in receiving yards and yet no trips to the house. That has to change sooner or later for him.

5. Tyreek Hill @ Cleveland–Patrick Mahomes is starting to include Sammy Watkins more but Hill always has breakaway potential on every snap. Antonio Brown got behind Browns’ defenders last week and Hill will likely do the same.

6. Mike Evans @ Carolina-Was getting targeted a lot when Ryan Fitzpatrick began the season as the starter. The same outcome may occur again with Fitzmagic getting the call to start this week.

7. Antonio Brown @ Baltimore-Big Ben looked his way 11 times in the first meeting. Being on the road will be harder so Brown may accumulate similar numbers in this contest as well.

8. Julian Edelman vs. Green Bay-He’s put together four solid outcomes since returning from suspension. Edelman will thrive with Tom Brady feeding him constantly.

9. Robert Woods @ New Orleans-Consistency is the name of the game when it comes to Woods. At least 5 grabs for 70 yards since week one.

10. DeAndre Hopkins @ Denver-Gotta wonder how much Demaryius Thomas will cut into his looks. Although Deshaun Watson might have found his 2017 form again.

2. Rob Gronkowski vs. Green Bay-Gronk is slowing down a bit but is still Brady’s top guy because he is a mismatch nightmare, especially when fully healthy.

3. George Kittle vs. Oakland-Depending on who the Quarterback is, the 49ers would be wise to throw Kittle’s way very often. Jack Doyle, Eric Ebron, and even ex-basketball player Mo Alie-Cox just lit up the Raiders, which bodes well for Kittle.

5. Greg Olsen vs. Tampa Bay-Olsen is beginning to appear like his old self before his foot injuries.

6. O.J. Howard @ Carolina-Is awakening at a light position of depth in fantasy. At least 54 yards receiving in every game this season.

8. Jordan Reed vs. Atlanta-Still a shaky start for some, but this could be one where Reed finds paydirt in the nation’s capital.

9. Kyle Rudolph vs. Detroit-Averaging 40 yards a game. Detroit has given up 3 scores to tight ends in the last four, so Rudolph has a chance to do something good at home.

10. Trey Burton @ Buffalo-Which version will show up? The one who sliced through New England like swiss cheese or the one who only managed 18 yards on 3 snags in New York?