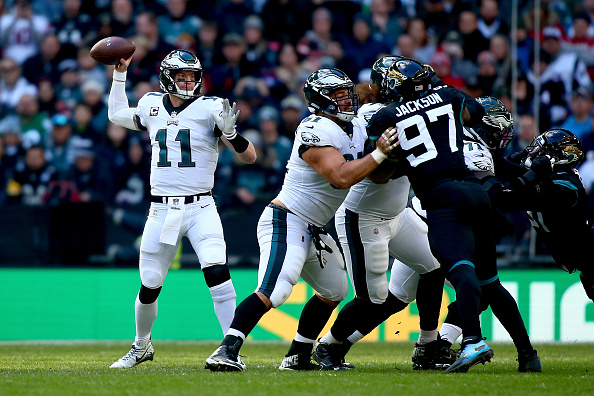 A recap of each game from the past week and a look ahead to who your team will be facing in week 9.

At a jam-packed Wembley Stadium on Sunday, Carson Wentz threw for three touchdown passes in a strong bounce-back performance, as the Philadelphia Eagles defeated the Jacksonville Jaguars 24-18. The Eagles are now back to .500 and still a strong contender in the NFC East. Wendell Smallwood and Zach Ertz each added second-half scores for the Eagles. Blake Bortles managed to redeem himself to an extent, after being pulled in a loss to the Houston Texans the previous week, completing 24 of 41 passes for 286 yards for the struggling Jaguars, the Jags drop to 3-5 on the year.

Both teams will have the bye next week.

Brown added two touchdown grabs, those were for 43 yards and 1 yard. Rookie quarterback Baker Mayfield threw a pair of TD passes, but the Browns were not able to seriously push the Steelers in the game.

In week 9 the Steelers visit another hated AFC North rival, in the Baltimore Ravens. The Browns will have their hands full, hosting a very dangerous Kansas City Chiefs side.

The Rams took a 29-27 lead on a 34-yard field goal with 2:05 left and recovered Ty Montgomery‘s fumble on the kickoff return, Gurley ran 17 yards for a crucial first down, stopping before reaching the end zone, killing the clock and any chance for Rodgers to work his magic. The Rams picked up the 29-27 victory and kept their unbeaten streak alive. The Packers dropped to 3-3-1.

Goff rallied from the surprising 10-0 deficit and methodically turned it into a 23-13 lead late in the third. Rodgers managed to push back, eventually taking the late lead on a Scantling touchdown strike, putting the Packers up 27-26 with 8:50 left.

It doesn’t get any easier for Green Bay, as they visit the Patriots. The Rams travel to New Orleans.

Patrick Mahomes threw for 303 yards and four touchdowns, electric receiver Sammy Watkins chipped in with two of the scores, and the Chiefs beat Denver 30-23 on Sunday to wrap up a sweep of the Broncos and keep their grip on the AFC West.

Case Keenum had 262 yards passing and two scores, while Phillip Lindsay had a big day rushing for 95 yds and a touchdown. Lindsay started in place of the injured Royce Freeman. Denver tried to come back in the fourth quarter when Jeff Heuerman caught a fourth-down touchdown catch. But the Broncos failed to convert the 2-point conversion, Keenum cemented it with the back-breaking pickoff.

Next week the Broncos host the Texans. As for the Chiefs, they visit the struggling Browns.

Cam Newton tore apart the tough Ravens secondary, completing 21 of 29 passes for 219 yards along with two touchdowns and running for 52 yards and a touchdown gallop as the Carolina Panthers defeated the Baltimore Ravens 36-21. D.J. Moore turned in his best game as a pro with 129 yards receiving as the Panthers won their ninth straight game at home. The Ravens came within 13 on Joe Flacco’s TD pass to Javorius Allen, but Cam Newton answered back with an 85-yard drive that resulted in a 12-yard touchdown score, putting the game virtually out of reach.

Andrew Luck threw a crucial late strike to break a tie with under a handful of minutes to go, as the Indianapolis Colts beat the Oakland Raiders 42-28. The win bumped Indianapolis’ record up to 3-5. Marlon Mack ran for a career-high 132 yards and two touchdowns to help out the Colts, breaking the record he set last week against Buffalo.

Derek Carr threw three TD passes and 244 yds, however, they just weren’t able to get the job done, as the Raiders have dropped to a lowly 1-6. For three quarters the Raiders held much of the momentum, at one point going on a 21-3 run, they eventually fell apart in the fourth quarter.

Indianapolis will have the bye next week. Oakland will face off against San Francisco.

Josh Rosen threw a 9-yard touchdown pass to Christian Kirk with 34 seconds to play to rally the Arizona Cardinals to an 18-15 victory. Key Cardinals receiver Larry Fitzgerald caught a 13-yd pass early in the fourth to cut the Niners lead to 15-10. For the 49ers, C.J. Beathard had 190 yards, one touchdown and zero interceptions on 14-of-28 passing and was sacked four times in the game.

San Francisco host Oakland next week. Arizona is on a bye week.

Washington was able to pull out a solid victory over the Giants, winning 20-13. The Redskins sacked Eli Manning seven times, forcing two turnovers and giving New York its fifth straight loss. Adrian Peterson ran for a season-high 149 yards, a good chunk of that total came on a 64-yard touchdown run with 3 minutes left. The Redskins improve to 5-2, as for the Giants they fall to an atrocious 1-7 on the season.

The Giants will have a much-needed bye week. The Redskins will play host to the Atlanta Falcons.

The Bears got the win after dropping two in a row to fall out of the NFC North lead, they improve their record to 4-3. Trubisky threw for two touchdowns and 220 yards. Jordan Howard ran for 81 yards along with a touchdown from the 2, to put the Bears up 24-10 which sealed it for them.

The Jets managed just 207 yards and lost their second straight game dropping to 3-5, Sam Darnold could only manage 153 yards passing, as he struggled mightily against a Bears Defense that was missing their stud, Khalil Mack.

The Bears visit Buffalo next week. As for the Jets, they travel to Miami

Randy Bullock kicked a 44-yard field goal on the final play, that sent the Cincinnati Bengals to a 37-34 victory over the Tampa Bay Buccaneers, With this win, the Bengals rise to 5-3, and as for the Buccaneers, they drop to 3-4. Dalton threw for a very respectable 280 yds and two touchdowns.

Winston was benched after matching his career high with four interceptions. In came Ryan Fitzpatrick who managed to rally the Buccaneers to a 34-34 tie with a pair of touchdown passes, including his 18-yard toss with 1:05 left to OJ Howard. Fitzpatrick finished with 194 yards on 11-of-15 passing in just over a quarter.

Tampa Bay is on the road to play Carolina. Cincinnati will be on the bye week.

The victory extended the Saints winning streak to six games and at 6-1 keeps them atop the NFC South standings, the Carolina Panthers are nipping at their heels just a game behind. The Saints used two key turnovers, including a 45-yard interception return by P.J. Williams. Drew Brees didn’t have to do that much in this one, throwing for 120 yds along with a touchdown and interception.

Alvin Kamara had two touchdowns and Will Lutz made three field goals for the Saints who needed only 120 passing yards by Brees to beat the Vikings, dropping them to 4-3-1.

The Saints host the undefeated Rams in what should be the game of the week next Sunday. The Vikings will entertain the Detroit Lions.

New England pulled away to earn its fifth straight win, an ugly 25-6 finish in Buffalo. With this win, the Patriots improve to 6-2. As for the Bills, they drop to a depressing 2-6.

A few late mistakes would ultimately be Buffalo’s downfall in its Week 8 loss to New England. After holding the Patriots to just nine points throughout the first three quarters, the Bills allowed 13 points in the fourth. Tom Brady put up 324 yards passing, however, thanks to a strong Defensive effort from the Bills was not able to record a single touchdown. James White came through with 76 rushing and a 1-yard touchdown run.

New England flies back to Boston to host the Green Bay Packers next Sunday. Buffalo hosts the Chicago Bears which should end up being a grind them out Defensive affair.