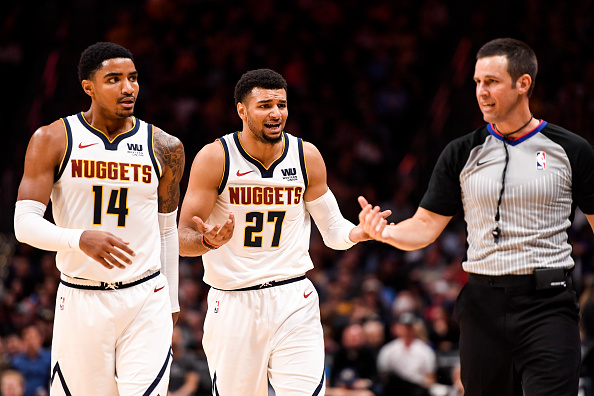 The Denver Nuggets, riding the momentum of a 4-0 start, were looking to continue their strong early-season form. Meanwhile, the Lakers had just picked up win No.1 the previous before. The effects of the big fight in the Rockets game were still being felt by the Lakers as significant players remained suspended. This encounter provided some great entertainment and fun, with the 72 million people who tuned in to watch being treated with a close finish.

After Luke Walton finally made a rotational change against Phoenix due to the suspensions of Rajon Rondo and Brandon Ingram, the Lakers coach stuck with the same starting lineup last night, keeping Lonzo Ball, Kyle Kuzma and Josh Hart in for the opening tip. The Lakers needed early firepower and it helped them significantly in this game. The Nuggets bench excelled as they used their speed to get plenty of easy buckets with Monte Morris hitting from every part of the court.

Last night's @FanDuel Value of the Night was Monte Morris!

The other Denver guards Jamal Murray and Gary Harris had solid games, revealing that the Nuggets are a complete team. The theory is that when you are at home, you tend to play better because of the crowd and energy in the stadium, and the Lakers were able to do just that last night. In tight games whoever finishes better typically wins and the Lakers finally managed to keep their nerve down the stretch to secure the win.

What the Lakers did right

Lonzo Ball’s defense was great as he stopped Nikola Jokic in crucial junctures of the game. When switched onto him, the second-year point guard was very stingy and, on the other end of the floor, he let his offense come to him by being pass-first rather than forcing the issue.

This sequence highlights Lonzo’s defensive reaction time, hand speed, instincts and then the calm step-back in the eye. pic.twitter.com/IZfSwWElju

Los Angeles seemed to lose concentration from time to time as the Nuggets would go on runs to try and extend their lead, but JaVale McGee got crucial baskets to keep the hosts in it in through those tough stretches. Even LeBron James needs rest and the Lakers typically fall off offensively without the King, but Sviatoslav Mykhailiuk and Johnathan Williams kept the intensity up, giving good energy to help the Lakers stay within striking distance when LeBron came back in. In some games, you simply cannot measure the impact of James because of how effortlessly he plays, and his triple-double with 28 points, 11 rebounds and 11 assists last night exemplified this. LeBron was passing well all game, finding teammates for good shots and only scored when the Lakers needed him to pull them back into the contest or to ice the game, as displayed by his two crucial layups in the dying minutes. The Lakers must keep getting wins against quality teams and last night was a good start.

What the Nuggets did wrong

Paul Millsap failed to get going as he scored just 6 points, letting the Lakers completely disregard him, even when Los Angeles ran their small-ball effectively. The forward was unable to take advantage of these situations when he had smaller defenders such as Kuzma and Ball on him.

Jokic may have had a double-double, but he missed several of wide-open shots and he also failed to take advantage of a smaller defender on him. The Serbian center tried to force the issue too much on offense and committed many fouls that cost his team easy baskets. The bench played so well in the second half that Mike Malone kept them in for too long and when he was forced to revert back to the starters late in the game, they had lost their flow. Moreover, it seemed as if the Nuggets starters gave the game away because the effort seemed to diminish when the Lakers swung the momentum during their late run. The Nuggets’ failure to finish the job cost them dearly as they saw their lead evaporate after a 23-8 game-ending run by the Lakers, which led to turnovers and poor shot selection. If Denver wants to be one of the West’s top teams, they need to show more composure in these situations. Otherwise, it could be a long year.

The game looked like it was going all the Nuggets way until Luke Walton decided it was time to unleash Lance Stephenson. It was a gutsy move to bench LeBron for three minutes at a critical time, but Lance Stephenson’s back-to-back threes pulled the Lakers back into the game after going down eight and swung the momentum their way. He scored eight straight points in that personal run, just when the Lakers required it to chop the game down to two. He capped it off by an outlet pass to a streaking LeBron, who finished it off for a dunk to give LA a lead that they would never relinquish. “Make’em Dance Lance” was showcased at the best possible time for the Lakers.

He played all 12 minutes in the fourth quarter and the stat line really doesn’t tell the whole story as he went 12 points, 4 rebounds and 4 assists but, for the second straight night, he sparked a Lakers win.

Rondo will be available Saturday, as this was the final game of suspension he had to serve for punching Chris Paul and Luke Walton should keep him on the bench. Ball has proven in this three-game stretch that he can start and is a better pairing for LeBron than Rondo. On the other hand, the Nuggets will be scratching their heads because they played a pretty good game for 42 minutes on the road, but their lack of experience began to show towards the game’s climax. The Lakers are a feisty team and it worked to their benefit for a 121-114 win, sealing LeBron’s inaugural home win as a Laker, to go with his first triple-double in the purple and gold.

The Lakers win their second straight game and improve to 2-3, while the Nuggets fall from the ranks of unbeaten to 4-1.