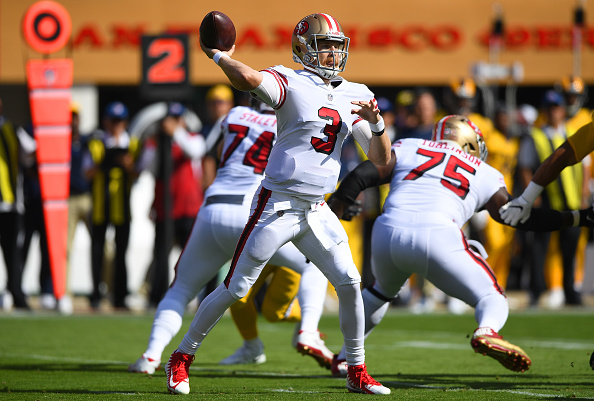 Week 7 streaming went pretty well if you tuned in. Hope you snagged some of the featured players. Unfortunately, Ricky Seals-Jones got injured and did not return to the blowout game Thursday night. Let’s get right to Week 8.

Kicker: I just realized I neglected to pick a kicker, sorry about that.

Duke Johnson: 3.9 pts, 1 rush, -4 yds, 4 catches, 23 yds. Bust. Not involved how I had hoped. Still a very valuable hold on your roster in case that changes. Can be a PPR game changer.

If you’re streaming QBs you might already have Mitch Trubisky or Andy Dalton. Those are the top plays this week against the Jets and the Buccaneers, respectively, but may be owned already. Joe Flacco is an unattractive, but solid option against the Panthers on the road. Derek Carr can’t be trusted even against the Colts, especially with no weapons around him following the Amari Cooper blockbuster. Alex Smith has the Giants but is middling and we just watched Matt Ryan do nothing special against the G-Men. Here are two options that I think offer a nice risk-reward in Week 8.

Baker is coming off a good game on the road against Tampa Bay. The rookie had 20.9 fantasy points on 258 total yards (43 rush) and two passing touchdowns. This week Mayfield faces the Steelers on the road and can finish with a similar stat line. Jarvis Landry finally returned to the spotlight and with it, Mayfield had his best fantasy game of the season. David Njoku has emerged as a top fantasy tight end and reliable receiver for Baker and Duke Johnson should be involved (if the Browns know what’s best for them) in the passing game. Mayfield now has the established weapons around him to be a solid streamer choice against an average-at-best secondary in Pittsburgh.

I am actually intrigued by C.J. Beathard this week. Beathard has played well in three of his last four starts with the outlier coming against the Rams in a blowout loss. In three starts he has 17+ points and one of the games was against the Cardinals, his opponent this week. Coming off a national embarrassment, the Cardinals look primed to be picked on all over the field. It’s a decent risk given he is a “backup”, but he looked good on Monday Night Football against the Packers and I think he will do a serviceable job at the very least.

Uzomah caught only two passes last week but one was a touchdown reception. The Bengals, specifically Andy Dalton, struggled mightily and Uzomah felt the consequences. This week the Bengals have another juicy matchup with the Tampa Bay Buccaneers at home. The Buccaneers are the league’s worst pass defense and the Bengals need the win and to relocate their groove. I think this will be a bounce-back game for Dalton and as a result a strong streaming week for C.J. Uzomah, the de facto TE1 in Cincinnati.

Coming off a bye week, Vance McDonald is looking to stay hot after his seven catch, 68-yard performance against Cincinnati. This week, Pittsburgh hosts Cleveland who just allowed O.J. Howard to amass 67 yards on five receptions. McDonald has flourished with the absence of Bell, a superior pass catcher because Ben has needed to find a new target in the intermediate range. James Conner has not been as productive as Bell in the passing game and McDonald has benefited from that. I like McDonald this week as a high upside streamer.

New England faces the Derek Anderson-led Bills who may be without LeSean McCoy. Anderson will have to battle potentially wet conditions with rain in the forecast and try not to turn the ball over four times like he did last week against a soft Colts defense. If the Patriots are available in your league (very possible), they are the top stream.

Coming off a strong week against the Bills as I just mentioned, the Colts now face the depleted, deflated, and untalented Raiders offense. The Raiders offer no threats to the Colts defense. Derek Carr is averaging 1.3 INTs per game and the Colts are coming off a season-high five turnovers. The Colts defense is now worth a stream for the second week in a row. Unbelievable.

This is an outdoor game but one where I expect the Bengals to move the ball past midfield with ease leaving Bullock plenty of field goal and extra point opportunities. The Bucs just lost their defensive leader Kwon Alexander for the season giving a boost to the Bengals offense. Again, I expect Cincinnati to show out offensively this week so Bullock could reap the benefits.

This is a very deep play. Laquon Treadwell has had a productive season for the Vikings as the third receiver listed on the depth chart. Treadwell has at least two catches every game and faces a Saints defense that struggles mightily against the pass. Adam Thielen and Stefon Diggs will be the focus of the defense leaving mediocre-at-best cornerbacks to cover Treadwell when he is on the field. He has a chance to surprise people this week and have his best game of the season. And as with any boom play, there is hope for a touchdown in this shootout game.

Dede Westbrook takes on the Eagles this week in London and should line up against Jalen Mills who has been one of the worst slot corners in the league this season. The last time Dede had such a favorable matchup it was against the Jets where exploded on Buster Skrine for nine catches and 130 yards. One of Jalen Mills’ biggest weaknesses is defending the big play so Westbrook could be in for a big day. Westbrook is elite in terms of yards after the catch so big plays are in his nature.

Good luck this week everyone. See you in Week 9.