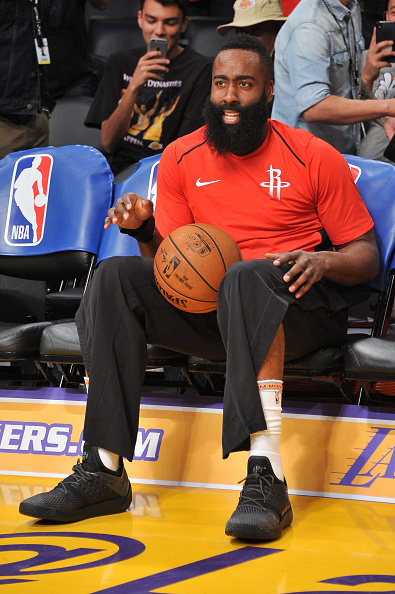 The Los Angeles Lakers and Houston Rockets both suffered losses in their first games and were both looking for their first win. This was the first home game for LeBron James‘ Lakers, and the buzz was high in media across the NBA. The visiting Rockets are the top-tier of the West, while their hosts last night are stuck in the middle of the pack. However, judging by the way the game was played, it looked as if the pair were equal.

The energy the Lakers played with was incredible; they had some flashes in the game where they looked very good. Houston is still adjusting to life without Trevor Ariza and Luc Mbah Moute defensively and it showed for the second straight game. JaVale McGee played impressed in his 20 minutes, showing great effort on defense and offense. He perhaps deserved more time on the court down the stretch, as he tallied 16 points, 6 rebounds, and 5 blocks. Just look at this sequence from McGee:

On the contrary, Carmelo Anthony is still struggling with his bench role, he tallied a mere 7 points in 29 minutes and could not really establish a rhythm with his jumper. If you are the Lakers, you got what you needed offensively, with Rondo and Ball even getting involved. This is something to build on going forward in the search for consistency. It’s funny that the Lakers looked this good considering it is only Game 2, but it felt like a playoff game as the No.2 seed in the West was up in the air. Put simply, the Rockets have learned how to play on the road in tough situations and they stuck to their game plan all game long.

What the Rockets Did Right

The three-point shooting was great as the Rockets hit sixteen threes, anchoring them offensively and helping them win it. Clint Capela feasted down low on the Lakers small-ball lineup and despite not having his best game (he got blocked by several Laker players) he did not give up and still tallied 19 points and 12 rebounds, and was a force in the game. It’s funny how Houston’s offense can just hit a couple of baskets and start instantly rolling, but that’s exactly what you get when you have James Harden and Chris Paul. Paul did a great job of initiating the offense with 10 assists, as well as hitting jumpers off screens and driving for easy layups. The veteran point guard played with the effort and energy when his side needed it and served as a good No.2 option with great play throughout. The Rockets countered every Laker run very well and silenced the home crowd by finishing the game off well in the clutch for their first win. The big fight didn’t seem to impact them too much even though Chris Paul was ejected.

What the Lakers Did Wrong

The fourth quarter brawl did impact the Lakers big-time because you just cannot get frustrated like that with such little time to go in the game. Although James Harden’s ability to draw fouls is very exhausting, shoving him in retaliation is not the way to respond to a bad call. This sparked some craziness as just when that altercation ended, Rajon Rondo and Chris Paul started another flashpoint when Rondo got into Paul’s face and spit on him, prompting Paul to stick his fingers in Rondo’s face and shove him back. Rondo responded by punching Paul in the face, before both started wrestling when Ingram came in and threw a punch of his own. LeBron James and other players played peacekeeper, but Paul, Ingram and Rondo got ejected. The loss of two key players was a major blow for the Lakers, as they were having really solid games and may have been the difference in a tight game.

THIS IS A TEAM OF DOGS. Everyone has each other’s backs. It’s the new culture! Peep Ingram’s punch 👀

The Lakers struggled from three-point range for the second straight game, going just 8/32. They should really consider giving some minutes to Sviatoslav Mykhailiuk, who can be a sniper from deep, and give more looks to Kentavious Caldwell-Pope to try and get something going. The Lakers keep insisting on a death lineup, but they must give substantial minutes to Ivica Zubac, so they can at least try to protect the rim better as they are not the team with the right players for the small-ball lineup. Usually, Kyle Kuzma hits on all cylinders and is a nice spark off the bench, but he missed too many good shots, before trying to make up for it by forcing the issue too much on offense. His inability to let the game come to him cost the Lakers in crunch time. The young players do not know what it feels like to play in a big game and it showed at the worst time in both encounters so far this season. When crunch time has come it seemed as if they were a little unsure of what to do and the Rockets took full advantage of this for a quality win.

James Harden just knows how to finish the job and he seems to be one to consistently doing it for the Rockets. Harden got to the free throw line many times in the first half, helping frustrate the Lakers as his ability to draw fouls is among the best in the league, He also hit threes, knocked down mid-range jumpers and Euro-stepped his way to the hoop for 23 first-half points. He even frustrated Ingram so much that he got under the forward’s skin that led to the huge altercation that got him, Paul and Rondo ejected in the game’s dying minutes. Chris Paul had been anchoring the team, but once he got tossed Harden was forced to close out the Lakers by himself, but he did just that. Harden hit some free throws to keep the Rockets lead afloat and then hit a three right over Lonzo Ball, before hitting the game-sealing layup to keep the Rockets in the top-tier of the NBA with the win.

The Rockets needed some confidence after the opening game loss and Harden gave them just that. The Beard came into LeBron’s turf and got the win to ruin James’ home opener with the Lakers.

Brandon Ingram, Chris Paul, and Rajon Rondo will be suspended for their actions in the brawl last night and it should impact the next game these teams play since these three are main rotational pieces. Apparently, though Rondo and Paul have some history:

Rondo vs. Chris Paul has been brewing for a decade pic.twitter.com/4kV9qnNNwt

The game was close, but in the end, the better team a found a way to steal a win. The Lakers lose their home opener and go to 0-2 for the season, while the Rockets notch their first win and improve to 1-1.