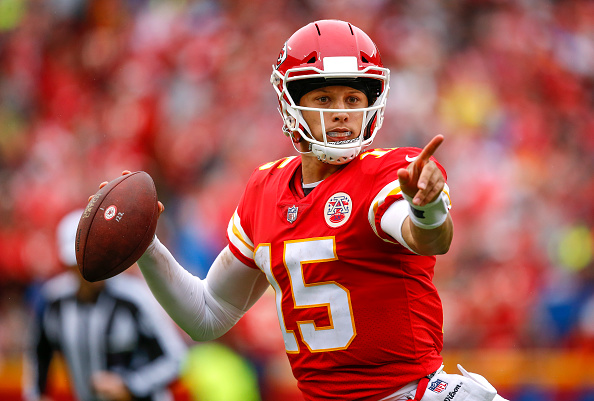 The QB position is the most important on the football field and possibly in sports. Here are all the starting QBs ranked through the first five weeks of the NFL season.

#1 Patrick Mahomes. He’s 6-0 in his career and his Chiefs are 5-0 this season and the class of the AFC. He beat the Broncos on the road in Week 4 and had a big win against Jacksonville last week. He’s passed for 14 TDs and 2 INTs in his first full season as a starter. Extremely impressive. He’s playing at the Patriots which will be a true test.

#2 Drew Brees. He’s as good as ever and he’s fresh off of breaking Peyton Manning‘s all-time passing yards record. He’s sporting a 78% completion percentage this season, along with passing for 11 TDs and no INTs. The Saints are on the bye this week.

#3 Jared Goff. He’s led the Rams to a 5-0 record and he’s leading the league in passing yards. His next game is against the Broncos. He’s also passed for 12 TDs and 4 INTs.

#4 Aaron Rodgers. He’s led his team to a 2-2-1 record but that’s deceiving considering his kicker has blown two games for them. He’s passed for 10 TDs and 1 INT. He plays against the 49ers in Week 6.

#5 Tom Brady. He’s led his team to a 3-2 record and he’s passed for 12 TDs and 6 INTs. 4 of those interceptions were off the hands of his own receivers, so don’t read too much into it. He plays against the Chiefs in Week 6.

#6 Philip Rivers. He’s led his team to a 3-2 record, and he’s passed for 13 TDs and 2 INTs. He’s up to his old elite self this year again, and Rivers is playing at an unforeseen level. He plays against the Browns this week.

#7 Matt Ryan. He’s led his team to a disappointing 1-4 record, but that’s not his fault. He’s passed for 11 TDs and only thrown for 2 INTs. Team performance isn’t something I factor in, for all I care he could be 0-16 and still be here. He plays against the Buccaneers this week

#8 Russell Wilson. He’s led his team to a 2-3 record and has passed for 10 TDs and 3 INTs. Despite his defense not playing well, he has propped the team up to a mediocre 2-3 record. He plays against the Raiders this week.

#9 Big Ben. He’s assisted his team to a 2-2-1 record and he’s passed for 11 TDs and 6 INTs. Not bad for someone who is “washed up”. Ben also has been doing great things without Le’Veon Bell, his leading RB. He has leaned on his best receiver, Antonio Brown heavily, however, this is why he isn’t better than Wilson, who has done more with less around him. He plays against Cincinnati this week.

#10 Kirk Cousins. He so far has been the QB the Vikings gave $84M to. He’s passed for 11 TDs and 2 INTs and led the Vikings to a 2-2-1 record and has done great in most situations. One thing he needs to improve on is fumbles. He’s fumbled 5 times, losing the fumble twice, one on a potential game-winning drive against the Rams. He plays against Arizona this week.

#11 Matt Stafford. Some people might say, “why is Matt Stafford top 12”? My answer is, he has led his team to a 2-3 record but his two wins have come against the Packers and Patriots, two very good and well-rounded teams. He has passed for 10 TDs and 5 INTs. The Lions rushing attack is being helpful for once this year which helps take pressure off of Stafford. He plays against the Miami this week.

#12 Andy Dalton. Two back-to-back names that in some people’s opinions don’t belong this high on the list, but Andy Dalton has gotten his team to a 4-1 record, passing for 12 TDs and 7 INTs. What really hits you is his league-leading 3 game-winning drives in the 4th quarter. Without his clutchness they would be 1-4. He plays the Steelers this week.

#13 Joe Flacco. Whether you think he’s elite or not, he is playing this year at a good level. Flacco’s led the Ravens to a 3-2 start, he’s passed for 8 TDs and only 3 INTs, he’s passed for over 1,550 yards so far, and he’s led his team to wins against the Bills, the Broncos and at the Steelers. He faces Tennessee this week.

#14 Cam Newton. He’s performed at a middle of the ground standard so far, passing for only 7 TDs and 3 INTs. He plays against the Redskins this week.

#15 Baker Mayfield. Boy, the Browns might FINALLY have their QB. He’s led them to a comeback victory vs. the Jets, almost a win at the Raiders, and a win against the Ravens. He has passed for 3 TDs and 3 INTs. He plays against the Chargers this week

#16 Andrew Luck. Rounding out the top half of our list is the man who can’t seem to stay healthy. He has done literally everything he possibly could for the Colts, leading the league in passing attempts and completions. Luck’s passed for 12 TDs and 5 INTs and has led the Colts to a deceiving 1-4 record. He plays against the the Jets this week.

#17 Deshaun Watson. He’s led his team to 2-3 and two consecutive wins. He’s passed for 8 TDs and 5 INTs and performed well against the Cowboys and at Indianapolis. He wasn’t impressive in the clutch before the Cowboys game, holding on to the ball for 12 seconds when the clock only had 17 seconds on it then throwing it right down the middle with no timeouts when they were already in field goal range. He plays against Buffalo this week.

#18 Carson Wentz. He’s been pretty good in his three games back from injury, passing for 5 TDs and 1 INT. He’s lost in OT to the Titans on a last-second touchdown, and he lost to Minnesota because his defense couldn’t hold up. His two losses really weren’t his fault. He played on Thursday Night Football against the Giants.

#19 Mitch Trubisky. He had a really good game against the Bucs and is coming off the bye to face the Dolphins. He has passed for 8 TDs and 3 INTs.

#20 Ryan Tannehill. Ryan Tannehill is underrated, but not underrated enough to be over Trubisky or Wentz. He has passed for 8 TDs and 5 IN’s and he faces the tough Bear defense this week.

#22 Alex Smith. Alex Smith has dropped off dramatically due to the lack of weapons he has compared to when he was in Kansas City. He’s passed for 4 TDs and 2 INTs in four games. He faces the Panthers this week.

#23 Derek Carr. Oh how Derek Carr has fallen off. After three straight Pro Bowl seasons, he has only passed for 7 TDs so far this season and has thrown a league-high 8 INTs. Three of those interceptions were off of the hands of his own receivers. Last game against the Chargers instead of simply handing it off to Marshawn Lynch for the TD, he tried to pass it to his TE, and it got intercepted. He will face a tough test against Seattle this week.

#24 Sam Darnold. The Jets have renewed hope at the QB position in Sam Darnold, some people are already calling a bust; which I find unfair considering he’s only played five games. He has passed for 7 TDs and 6 INTs, had an impressive win against the favored Broncos last week, and will face a very winnable game against the Colts.

#25 Blake Bortles. Oh, Blake, he’s one of the most back and forth QBs in recent memory. He threw 61 passes against the Chiefs and completed 33 of those passes. So far this year he’s had two really good games and three bad ones. He will face a good Dallas defensive line this week.

#26 Josh Allen. Allen is only behind Blake because he has only had one impressive win, at Minnesota, which is definitely the upset of the year so far. He has passed for 2 TDs and has thrown 5 INTs. He has leapt over defenders once also.

#27 Dak Prescott. Dak so far this year has been less than impressive, only passing for 5 TDs and 4 INTs. He has sort of fallen off this year after Jason Witten and Dez Bryant retired/departed in the offseason. The Cowboys face a stout test in the Jaguars this week.

#28 Josh Rosen. Josh Rosen is coming off of an impressive win against the 49ers, and so far in three games, he has 2 TDs and 1 INT. He faces another tough test against the Vikings this week.

#29 Marcus Mariota. Mariota is not that great of a QB. He’s only passed for 2 TDs and 4 INTs in four games and has one impressive win against the Eagles. That’s what’s keeping him above Beathard and Winston and Manning. He faces a tough test against the Ravens.

#30 Eli Manning. The reason Eli is this low is he is seemingly incapable of passing long down the field. He has 6 TDs and 3 INTs this season. He faced the Eagles on Thursday Night Football.

#31 C.J. Beathard. Almost rounding out the bottom of the list is C.J Beathard. He hasn’t been too bad so far, but not good enough to be over Eli Manning. He has passed for 4 TDs and 4 INTs in two games as a starter, with a last second INT against the Chargers, and a depressing loss at home to the lowly Cardinals. The 49ers face the Packers on Monday Night Football.