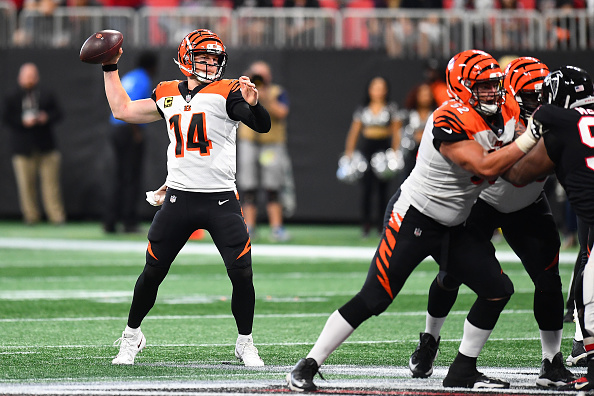 It’s the weekend! Time to set those lineups. Hopefully, you have Drew Brees on your team. That would bring you here to check out my streamer options. But also, congrats for having the best fantasy quarterback come year end. Matt Stafford is also on a bye. In the next six weeks there will be a need to stream, so tell your friends where you got your streaming options. Or don’t – if you want them to lose their matchup.

Andy Dalton: 12.9 pts, 248 yds, 1 TD, 1 INT. MIA secondary is good. Mixon went off. Toughest of the 4 matchups. Had to add him in advance of these next three matchups if you wanted him on your team.

Corey Grant: Injured in the game. Out for the year.

Last week I mentioned that Andy Dalton was going to be one of the top, if not the top streamer for the next month. Now that timeframe shrinks to three weeks, but his streaming status remains the same. This week Dalton takes on the Steelers in Cincinnati. The Steelers offer Dalton a juicy matchup with their recent struggles stopping the pass. The Steelers defense picked up a little bit last weekend, containing the Falcons receivers to 173 yards between the three big names. Matt Ryan still had 285 yards thanks to Austin Hooper’s 77 yards. Even still, the Steelers have yet to prove their defense is good away from Heinz field so this is a matchup I still am excited about. The Bengals have Tyler Boyd, one of the best number two receivers in the NFL. They also have Joe Mixon who could easily surpass 100 receiving yards any given game. In a game I anticipate the Steelers to win, Dalton will surely get plenty shots up.

Baker Mayfield put up 18 points last week at home against the Baltimore Ravens defense who had cornerback Jimmy Smith back from suspension. That is a strong day from the rookie against one of the best defenses in the league. Mayfield threw for 342 yards and one score and ran for 23 yards as well. This week the Browns will host the Chargers of Los Angeles, not San Diego. The Charges are a high scoring offense, which will force the Browns to either completely slow the game down or keep up with the Chargers. The LA defense has struggled this season. Injuries have sent the defense into a spiral. The Chargers are 14th-worst yards allowed and T-6 worst for most passing touchdowns allowed. LA has also given up the longest pass play of the year (82 yards), which could mean a big day for Antonio Callaway through Baker Mayfield. Casey Hayward is struggling this year, probably because the Chargers defensive line isn’t getting to the QB like they did last year because of injuries to Joey Bosa and previously suspended Corey Liuget. With many QBs on other team’s benches, Mayfield offers a safe floor with upside.

There’s a chance he is still unowned in your league. You should change that. Njoku has been targeted at least seven times in four of five games. This past week in Mayfield’s second start, Njoku enjoyed season-highs in receptions and yardage (see above). Similarly, with Ebron, I will continue to recommend Njoku until he is owned everywhere. Ebron certainly is now after his performance last Thursday, which is why he won’t be featured this week. Njoku is on the rise and is certainly the safest tight end left in your league given his target share. As Mayfield continues to grow, Njoku should grow with him. And he still hasn’t scored. It’s coming.

You might have to ride with Hooper here. It’s a guarantee he won’t see 12 targets like he did last week but he can still have 4-5 catches against a weak Buccaneers secondary that will be preoccupied with Julio Jones, Mo Sanu, and Calvin Ridley. Vance McDonald had himself a day against the Buccaneers on Monday night two weeks ago with the weak Tampa safeties and Hooper could have the same luck. Hooper might find himself wide open in this game with all the focus on the receivers. Riding the hot hand might be a good idea.

Cameron Brate is almost a must-start this week with O.J. Howard either sitting out or playing banged up. His connection is tremendous with Winston, especially in the red zone. He has scored the past two games and is not owned in most leagues because of his extremely slow start and Howard’s emergence in the first few weeks. He is a great candidate to finish as a top-six tight end this week in a game with shootout written all over it.

Dallas has a nasty front seven. They will get after the quarterback as much as they can because their secondary just isn’t that good. This week they host the Jaguars, an offense that doesn’t scare you led by a QB that will throw an interception to any defense in the NFL. The Jaguars offensive line is dealing with injuries so this is a good opportunity for the Cowboys defense to lead their team to an upset victory.

The Jets host the Colts this week. Not the best matchup considering Andrew Luck has come on recently but the Jets get after the QB well and the Colts give up plenty of sacks. Fantasy defenses are driven mostly by sacks so the Jets are as good as any team on the waiver wire. Tough week for streaming defenses.

High scoring team in a projected high scoring game in a dome. After Mason Crosby, I have given up on kickers. He lost me matchups. But in all seriousness, this game is probably going to lack any defense. Always good for kickers.

As mentioned earlier, Los Angeles gives up big plays and a lot of passing touchdowns. Callaway has tremendous speed and is already one of the best deep-play threats in the league. He also has the ability to play as a possession receiver and rack up catches so he is not really just a deep threat. With Rashard Higgins sidelined, this game is a good opportunity for Antonio Callaway to produce.

It is looking like Devonta Freeman will not play this week. Great news for Tevin Coleman owners and also good news for Ito Smith, the third-string running back for the Falcons who has now scored in back-to-back weeks and has seemed to gain a prominent goal-line role. Smith now has a direct path to carries and goal-line work in Freeman’s absence. He has been used heavily for a third-string back and I think is as safe of a deep “boom” play I have come across with Freeman’s injury news. He might even be worth a hold on your roster should the Falcons deal Tevin Coleman away and leave themselves with Ito Smith and a banged-up Devonta Freeman.