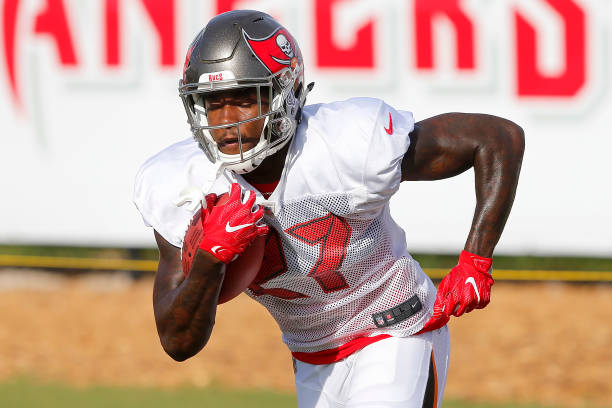 This week is one of the weakest waiver wire weeks so far. There is not much to be had in regards to QBs, but there are a few RBs and a plethora of WRs ripe for the taking. For those of us who are sitting at 5-0 or 4-1, it is time to start thinking about playoffs and that means clearing your bench of worthless fodder and adding players with serious upside. The following waiver wire adds reflect a $100 Free Agent Aquisition Budget (FAAB).

Jameis Winston (TB) – It only took one half of bad football for Jameis Winston to get his job back from Ryan Fitzpatrick. The magic is over and it’s time for the young stud to take over. Winston was on pace for 4,900 yards last year so with the weapons he has around him, he is a must-add for those looking for QB help. He just might be a season-saver. I’d spend $13-17 FAAB.

Baker Mayfield (CLE) – Baker is showing the world that he deserved to be the number one pick in the NFL Draft. He is a winner plain and simple. He provides an energy that the team feeds off of, and it makes everyone around him better. He several weapons at his disposal and if you are hurting at QB or yours is on a bye soon, Baker might just be exactly what you are looking for. He is not worth any FAAB.

Ronald Jones II (TB) – This is his backfield unless he makes a colossal mistake in the coming weeks. He was activated for the first time this season last week, and he got more touches than Peyton Barber, who has been abysmal thus far. Jones is far too talented not to make an impact on this team moving forward and he needs to be owned in all leagues due to his potential upside in this offense. He is worth $7-10 FAAB.

Nyheim Hines (IND) – The Colts running game is ineffective and boring to watch. Enter Nyheim Hines. He is a prolific pass catcher, and he was the fastest player at this year’s rookie combine so he has the speed to hit paydirt anytime he touches the ball. Andrew Luck is targeting Hines in the passing game with frequent regularity and this week he added 15 carries. He is a must-add in PPR leagues as he should garner a floor of 7 targets a week, and if the carries continue, he will be an every week RB2. He is worth $17-21 FAAB if he is still available.

Wendell Smallwood/Corey Clement (PHI) – Sadly, Jay Ajayi is lost for the season with a torn ACL, and Smallwood has been getting most of the touches. It will be a committee backfield moving forward, but Smallwood has a shot to be an RB2 if he can capitalize on his opportunity. Corey Clement and Darren Sproles will also be involved, as well as rookie Josh Adams, so if you have room on your bench, they are decent speculative adds. I’d spend $10-15 FAAB on Smallwood and $5-7 on Clement.

D’Onta Foreman (HOU) – This backfield is a disaster and Foreman is just waiting in the wings to make a splash. He is eligible to return next week from the Physically Unable to Perform (PUP) list and all talk out of camp is that he has suffered no setbacks and should be ready to go. Before his injury, Foreman was slowly taking the job as the team’s RB1 and with the pitiful RB performances in his absence, that should not be too difficult. He is worth $7-12 FAAB.

Antonio Callaway (CLE) – This week was a rough one for Callaway again, but that just means he will be cheaper. Add in the fact that Rashard Higgins will be out 2-4 weeks with a sprained MCL and Callaway’s opportunities are sure to grow. Get him on your team while he is still available. He is worth $4-7 FAAB.

D.J. Moore (CAR) – This guy is far too talented to remain an afterthought in this offense. His role increased slightly this week, and if used properly, Moore can be a second-half breakout receiver. Think about what Calvin Ridley is doing and that is what Moore is capable of. He is an excellent bench stash for the weeks to come. He is worth $2-4 FAAB.

Taylor Gabriel (CHI) – I have touted his separation skills, and last week he cashed in with seven receptions for 107 yards and two TDs. It was a stellar performance and something he will surely build off of. While Anthony Miller is out with a shoulder dislocation, Gabriel is the WR2 for this team. I would start him every week until Miller returns. Maybe even thereafter. He is worth $10-13 FAAB.

Christian Kirk (AZ) – Sunday was not a fantastic outing for Josh Rosen, but Kirk made good on his targets catching all three for 85 yards and one TD. David Johnson was more involved as expected and that should open up the receiving game in the future. With the second most targets on the team, Kirk is a deep sleeper, but he should only be started in the direst of circumstances. He is worth $1-3 FAAB.

Martavis Bryant (OAK) – Talent has never been the issue with Bryant; it was always the passion and off the field concerns that worried teams. Now with the Raiders, Bryant appears to have a fresh start, and it does not seem like a suspension is coming as we all feared. This week he was very involved in the offense, and if he and Derek Carr can get on the same page, there are going to be a bunch of explosive plays in Bryant’s future. He is not worth any FAAB.

Keke Coutee (HOU) – I was a huge fan of Coutee coming into the season, but he was buried on the depth chart. Now that Will Fuller is not 100% healthy, it is Coutee’s time to shine. He stepped in last week and looked fantastic on route to a team-high 11 receptions on a team-high 15 targets, and this week he maintained his WR2 role on this team. He was explosive and physical and he gives this team the talented slot receiver that they have been missing. I expect Coutee to be heavily involved moving forward, even when Fuller returns to 100% health. He is worth $7-11 FAAB.

Marques Valdes-Scantling (GB) – This guy is a 6’4  beast that can take the top off of any defense. Aaron Rodgers had no hesitation throwing his way. So as long as Randall Cobb and Geronimo Allison are out, he makes for an interesting FLEX play with WR3 upside. I’d spend $6-11 FAAB on him, and I would prioritize adding him if I owned any of the other wide receivers.

Chester Rogers (IND) – Rogers come out of nowhere last week and he built on his impressive performance this week. He looked excellent running routes and Andrew Luck has complete confidence in him. Hamstrings are tricky so there is no telling how long T.Y. Hilton will be out for, which makes Rogers a must-add in most leagues. If he is able to steal the WR2 job away from Ryan Grant, Rogers could be in for a huge season. He is worth $4-7 FAAB.

Tre’Quan Smith (NO) – Smith is an explosive rookie who took advantage of his opportunity. Do not expect two TDs on three targets to ever happen again, but he has definitely shown the coaching staff that he deserves more snaps. As long as Ted Ginn Jr. is sidelined, he makes for an interesting FLEX play. I would not spend any FAAB on him.

Cameron Meredith (NO) – Meredith seems to have the WR2 role on this team for now. He is a tall wide receiver, talented route runner, and he should be owned in 12-16 team leagues. He is coming off of a devastating knee injury so his role may increase as he gets further up to game speed. I would not spend any FAAB on him.

Robby Anderson (NYJ) – Don’t get too excited about his two TD performance as the defense sold out to stop the run and Anderson beat his coverage. He still only had three targets and Sam Darnold is still not a deep passer. That being said, Anderson is extremely talented and he is worth an add in hopes that his role grows moving forward. He is worth $3-7 FAAB.

Mohamed Sanu (ATL) – Sanu continues to have more snaps and run more routes than Calvin Ridley. Obviously, Ridley is more explosive, but Sanu is not going anywhere. He is a favorite target of Matt Ryan and he has a weekly floor of six targets. He will be an excellent bye week fill-in and should be rostered in most leagues. He is worth $3-6 FAAB.

Josh Reynolds (LAR) – This one is a matter of availability. Cooper Kupp and Brandin Cooks are in the concussion protocol and if they are both inactive this week, then Reynolds is an interesting FLEX play. He is not worth any FAAB.

Austin Hooper (ATL) – Hooper led the team in targets this week, which is very surprising considering they were not facing a tough secondary. Hooper made good on his targets and led the team in receptions and yardage as well. I expect him to be a little more involved in the game plan moving forward, so he is definitely worth a pick up due to the tight end apocalypse. He is worth $3-6 FAAB.

Niles Paul (JAX) – Paul got nine targets this week, and with Austin Seferian-Jenkins placed on injured reserve the TE1 role is his for the taking. The tight end position is an absolute nightmare this season, so any tight end that is expected to see targets is worth an add. I would not spend any FAAB on him.

Cameron Brate (TB) – Brate and Winston have a chemistry that results in plenty of TDs. With O.J. Howard sidelined another few weeks, expect Brate to step in seamlessly to the TE1 role on this team. He needs to be owned in all leagues due to the train wreck that is the tight end position this year. I’d spend $4-7 FAAB.

Houston Texans – This week they get the Buffalo Bills. I would spend $1 FAAB.

Green Bay Packers – This week they take on C.J. Beathard and the beat up 49ers. This defense should rack up fantasy points this week. I would not spend any FAAB.