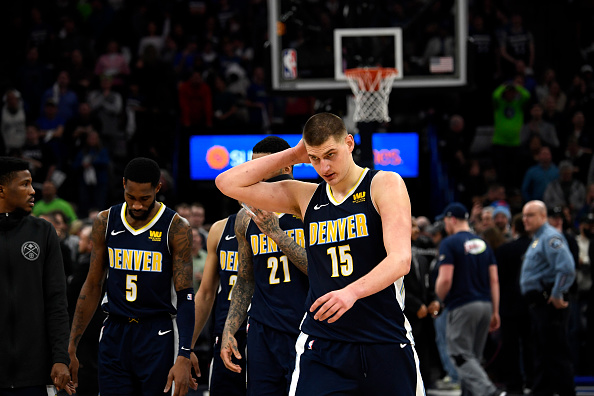 After missing out on the playoffs by the smallest of margins last year, the Denver Nuggets will be determined to make the playoffs this time around, but just how far can this young team go?

The Nuggets’ 2017-18 season all came down to one game, but the ultimate outcome was bitterly disappointing. Bolstered by the addition of all-star forward Paul Millsap, Denver was hopeful of a return to the playoffs last season, after a four-year absence. However, they fell victim to the depth and quality of the Western Conference, as despite having a winning record for much of the season and coping well with the absence of Millsap to a wrist injury, a handful of disappointing losses in March forced them out of the playoff picture. Cue a frantic climax to the campaign, which culminated with a winner-takes-all battle with the Minnesota Timberwolves for the final spot in the postseason. The match-up was effectively a playoff encounter, and the atmosphere and intensity of the occasion emphasized this. Not fazed by the raucous Minnesota crowd, the Nuggets handled everything the Timberwolves threw at them, as the epic clash went into overtime. The extra five minutes were just as nail-biting as the 48 that had preceded it, but Denver simply did not have enough left in the tank. They ultimately lost by six and, just like that, their season was over. The fact that their record (46-36) was the third best in history for a non-playoff team offered no consolation.

In the offseason that followed this heartbreak, the Nuggets have kept the majority of their roster intact, the only major loss being Wilson Chandler to the Philadelphia 76ers. The re-signing of star center Nikola Jokic to a mammoth $148m max deal, as well as the $53m contract handed to forward Will Barton, indicate that the Nuggets are committed to contending now. Additionally, they secured two potential steals over the summer in Michael Porter Jr and Isaiah Thomas. Porter slipped to 14th in the draft after being as high as number two on some boards while Thomas, who finished 5th in MVP voting a little over a year ago, accepted in a minimum salary contract in Denver.

The Nuggets averaged an impressive 110 points per game last season, the sixth-highest in the NBA. Looking at their personnel, it is little surprise that they are such a force offensively. Jokic often looks like a stereotypical, clumsy European big, and he will not bully other centers with imposing physicality. Regardless, he might just be the most skilled five in the league and, at just 23, is poised to get even better.

Last year, the Serbian notched 10 triple-doubles. No other center managed more than three. The primary reason for him being head and shoulders above his contemporaries is his unique passing ability, which allows him to find open team-mates with outrageous no-look dishes, both in the post or transition. His intelligent footwork and soft touch mean he can create for himself too, and he shoots a smidgeon under 40% from three-point range, which leaves the paint open cutters. If all else fails, Jokic has the uncanny knack of hoisting up ugly-looking efforts as the shot-clock expires, only for them to find the bottom of the net. It may not be as easy on the eye as his passing, but it is immensely effective.

The Nuggets surround Jokic in the starting line-up with plenty of shooting in order to maximize spacing and his distribution ability. The youthful backcourt of Jamal Murray and Gary Harris provide serious threats from behind the arc, while Barton and Millsap are very capable of connecting on open looks.

As a team, the Nuggets play an attractive brand of basketball with plenty of ball movement. Although they have plenty of shooters they are not solely reliant on triples: Barton is a strong slasher, and if Millsap can rediscover the form that made him a four-time all-star before his injury, Denver has their second star.

The Nuggets do not have many weaknesses on the offensive end, but they are bereft of a pure point guard to initiate the offense. Harris and Murray are both two-guards at heart, and it will be often left to Barton or even Jokic to bring the ball up. It is not a major concern for coach Mike Malone, but it is certainly an irritation.

If the Nuggets’ offense is what could launch them into the playoffs next season, their defense is what might hold them back. They sat 26th in defensive rating last season, with the only playoff team below them being the Cleveland Cavaliers. If Denver wants to play postseason basketball, they must either improve their defense or sign LeBron James. Considering they already tried (and failed emphatically) to recruit LeBron, the Nuggets will have to go for plan B…work on their play without the ball.

The Nuggets ranked dead last in opposing field goal percentage in the previous campaign, largely due to their roster simply not containing many strong defenders. Jokic’s lack of athleticism is easily punished, while Harris and Murray both stand at just 6’3″, allowing taller guards to get off what are essentially open looks at will. Likewise, although Wilson Chandler was not exactly Kawhi Leonard last season, his athletic prowess will be missed.

Provided Millsap spends less time on the sidelines this year, the Denver defense will improve, with his versatility set to be key. Moreover, young teams like the Nuggets tend to get by on defense from their effort alone, and with the finish to last season still haunting them, they will not be short of motivation.

All in all, while the Nuggets’ defensive frailties will not disappear overnight, they do have the potential to make progress. That being said, they will still be dependent on outscoring opponents to chalk up Wins.

The acquisition of the aforementioned Thomas was the Nuggets’ biggest success of the offseason. The diminutive point guard will not help them solve their defensive issues in the slightest, but he could thrive as a role player. After a sensational 2017 campaign, where he averaged 28.9 points and led the Boston Celtics to the Eastern Conference Finals, Thomas has been hampered by injuries ever since and looked even smaller than his height of 5’9″. As a result, coming off the bench may be the perfect situation for both parties, with the reduced physical toll allowing him to bounce back from a difficult twelve months. It is unlikely he will ever reach the heights that he did in Boston Green but, at just over $2m for one year, it is undoubtedly a risk worth taking for the Nuggets.

That being said, Denver are far from the deepest team in the league. Mason Plumlee is a solid backup at center and a strong shot blocker, but at an injury to Jokic would be a huge blow to the Nuggets playoff aspirations. Elsewhere, Malik Beasley, Trey Lyles and Torrey Craig averaged just 17 points between them last season, and are unlikely to be major contributors. Rookie Porter could be a superb player for the future, but a back injury will limit his time on the court significantly this year.

The Nuggets will once again be fighting for a playoff seed in the highly-competitive West. With Jokic entering his prime, Millsap back to full fitness, Murray and Harris a year wiser, and the low-risk, high-reward signing of Thomas, Denver should have enough to get over the line this year and make the postseason. With the high altitude of the city continuing to help the Nuggets at home, they will win between 46-49 games, which should be enough to sneak in.

However, defense remains a substantial problem and, alongside a lack of depth, will prevent Denver from both drastically improving their record from last season, and making any significant noise in the playoffs. They will not finish higher than the seventh seed, which means a first round match-up against the Golden State Warriors or Houston Rockets, which will prove too much for the Nuggets. Nevertheless, securing that long-awaited return to the playoffs would surely signal a satisfactory season in the Mile High City.