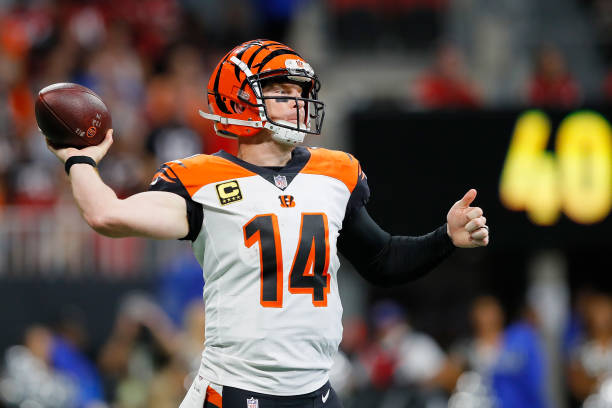 Bye weeks are in full swing. Streaming the right QBs, TEs and defenses will help you get a big win when some of your best players are out on a bye. And with the tight end position littered with injuries, streaming might be necessary every week.

In Week 5 we will lose the Tampa Bay and Chicago Bears players, who were opponents a week ago. We saw Mitch Trubisky, who has graced this article in the past, just go completely off and Trey Burton show a little life. We saw the Fitzmagic show end to welcome in Jameis Winston and O.J. Howard suffered a sprained MCL (2-4 weeks). Week 5 also brings us the return of the Panthers and the Redskins. You can lock Cam Newton, CMC, Jordan Reed, and Chris Thompson in your lineups and we might just see Alex Smith pop up in this article from time to time.

Let me know if you played these guys and if you’re happy or not on Twitter @TravisFinkel.

Time for Week 5 options. Sidenote: how is it Week 5 already?

Andy Dalton is coming off a 24.8 point, 330+ yard, 3 TD performance on the road against Atlanta. The Red Rifle is smoking right now. Get it? This week he faces the Dolphins at home, who are playing their second straight road game after getting picked apart by Tom Brady in Week 4. The Dolphins undefeated balloon is popped and they might be even more deflated now that they are missing two edge rushers. Dalton has 11 TD passes through four games and has at least two each game. The Bengals may need to rely on Dalton this week even more with Giovani Bernard likely to miss this game and Joe Mixon possibly returning from surgery. Even if Mixon plays, I can’t imagine the Bengals will decide to give him high volume in his first action back from injury, giving Dalton ample passing opportunity. The loss of Tyler Eifert hurts a little, but the combination of C.J. Uzomah and Tyler Kroft should be serviceable enough, especially in the red zone. Dalton is a hot hand play this week since his matchup is not the best on the market, but he also deserves an add consideration this week because his next three games are against Pittsburgh, Kansas City and Tampa Bay–debatably the three worst passing defenses in the league, at least for fantasy purposes. I am starting Dalton this week with the intention of holding and starting him for the next month up until his bye week.

Bortles is the most popular stream this week because of his matchup with the woeful Chiefs defense. The Chiefs secondary is terrible and Bortles has been impressive this year. Coming off a 24 point performance against the Jets, Bortles will probably need another good performance if Jags want to win this week. When the Jaguars ask Bortles to pass more, he usually steps up. He will need to pass against Kansas City who I still expect to score enough against the Jacksonville defense. They are just too good. Leonard Fournette is out again. Another reason Bortles will be called upon more. It seems the key for Bortles to have a great day is for him to throw over 300 yards and he has a great chance to do so against Kansas City. Bortles also offers a nice rushing floor with at least 25 yards each week. Maybe he sneaks into the end zone on a scramble too. That’s streaming for you. Hoping for the crazy scenarios.

David Njoku had his best game of the season last week when Baker Mayfield made his first career start. No surprise there. Rookie QB, big target in the middle is a simple recipe for PPR success for the tight end. Five catches and 52 yards were both season-highs. Njoku isn’t the type of tight end you expect an eight catch, 100-yard game from. His game last week seems more the norm; the only thing missing is the touchdowns. No touchdowns yet this season is very surprising to me considering his TD rate last season and in the preseason. It’s only a matter of time before he gets the first. Mayfield and Njoku have started to build a relationship that might turn into something special making Njoku a season-long hold due to his upside. This week the Browns host the Ravens who surrendered five catches for 62 yards to Vance McDonald last week. Almost an identical line to Njoku last week; I look for Njoku to have around the same again with the obvious touchdown upside. If he scores this week, I have a feeling the touchdown floodgates will be opened in a major way. Njoku is a low floor, high upside play every week but we may be seeing his floor rise with Mayfield under center.

The Falcons travel to Pittsburgh to take on the struggling Steelers and this game has the makings of a shootout. Two very high powered offenses and two bad defenses. In Atlanta’s defense, they are decimated by injuries. Nonetheless, the defenses can’t stop anybody right now. Hooper can easily find the end zone this week in what should be a back and forth scoring affair in Pittsburgh. Hopefully, the Steelers will focus more on star receivers Julio Jones and Calvin Ridley, leaving Hooper in favorable coverages. The return of Devonta Freeman should also open up more play-action passes to Hooper.

The Packers play a weak Detroit Lions defense that might be a little motivated to stop Aaron Rodgers at home. Crosby could have plenty of field goal opportunities in a Detroit dome. The Packers could be without at least two of their starting receivers so they may struggle to finish drives or get near the goal line. I look for good offenses that might struggle to cap off drives with TDs when picking a kicker so if Crosby isn’t the guy for you, stick to a similar formula.

The Titans play the Bills. That’s pretty much all you need to know to stream them. They are playing stout, hard-nosed defense and have won three straight games. Two of the teams they have beaten this year were in conference championship games in 2017–the Jaguars and the Eagles. One thing of note is that they are away, but that should not deter you from using them against a Bills team that was shut out last week.

The Panthers will host the New York Giants this week at home. Carolina is ranked highly, but not widely owned so they could be available in your league. The reasons here are obvious as the Giants are struggling mightily on offense. Odell Beckham Jr. has even come out publicly to talk about the struggles. As long as Eli Manning is taking snaps the Giants won’t scare anyone offensively, even if they have Saquon Barkley and Odell Beckham. Evan Engram is out this week with a knee injury allowing the Panthers to hone in even more on the two-star weapons. Carolina plays notably better at home with double-digit fantasy points in their two home games and just one fantasy point in their road loss to the Falcons.

Leonard Fournette is not playing in this game against the Kansas City Chiefs so it will be T.J. Yeldon and Grant handling the backfield duties. Grant will be mostly a change of pace back but there is a chance he sees a lot of pass-catching work in a game that figures to be high paced in Kansas City. The Jaguars may not be able to rely on their defense as much in this game as Mahomes is their toughest test yet since Tom Brady flopped in Week 2. Grant had seven targets in that game and he could see a similar role this week.

Wilson is a big play threat. The Dolphins do their best to get him involved in the passing game and the ground game as he has at least one rush attempt in three of four games this year. Wilson saw six targets last week and the Dolphins will need big plays if they plan to keep pace with the 3-1 Cincinnati Bengals. Maybe a big play is what the team needs to come out strong in a road game after getting destroyed by the Patriots last week.

Good luck this week. You should be fine as long as you prepped for your bye weeks and injuries.