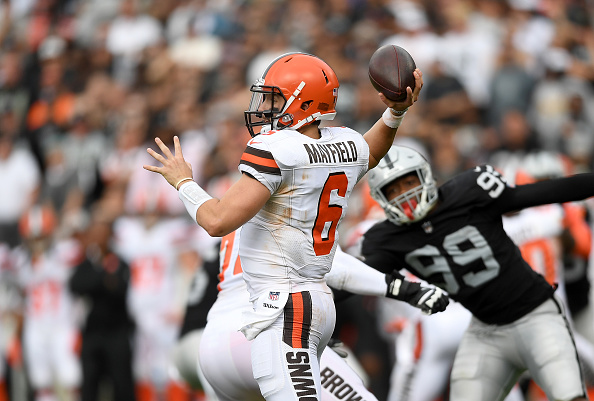 With the NFL season already a quarter of the way through, it is time to check up on some of the top divisions around the league. The crazy thing…the AFC North was not thought of as a top division in football at all entering the season. It’s crazy how fast team turnover can be in the NFL.

A New Leaf is Turning in the AFC North

Over the years we have seen many teams make the playoffs then bomb the next year. Or divisions suddenly erupt and become good. That’s the case here. Entering the year, it was projected the Steelers would win the division with ease and everyone else would be below average to average at best. Well, that is not the case at all. In fact, it seems we may have entered a parallel universe where the exact opposite is happening.

It is early in the season and a lot can happen, but early on it looks as if the division has almost flipped entirely compared to how it was projected by some.

It finally happened. The Browns won a game, thanks to rookie quarterback Baker Mayfield of course. Of course, then they played the Raiders the next week and some would say they reverted to old form, losing in overtime. Well, I’m here to tell you that’s not true.

Sure, the Browns did end up losing in overtime but if you watched the game it told a whole other story. You wouldn’t have seen the old Browns team put up 40 points in a game. No, this game was fresh with the young talent the Browns have. You saw a full display of what rookie running back Nick Chubb can do with the ball in his hands. Chubb carries the ball three times, rushing for 105 yards and two touchdowns. In the process, he showed his breakaway ability. Chubb wasn’t the only Browns running back to find success on the ground. Carlos Hyde did as well, posting 82 yards and a touchdown on the day.

While of course, the offense was able to get it going, the defense did struggle especially late in the game. The team let the Raiders put up 21 unanswered points in the fourth quarter, leading their comeback. This may not be good, but the team is still very young and has a lot to work on. Still, the Browns will push out some more wins this year and be competitive in the process.

What’s Up with the Steelers

As stated above the Steelers were projected to win the division…again going into the season. Throughout the beginning of the season they are, you guessed it, last in the division. So, what happened to get them here?

When watching the Steelers, it is easy to see their secondary is atrocious. One of their top corners Artie Burns was benched last week because of how often he got beat and struggled in coverage. Their rookie safety has struggled greatly as well. Of course, this shouldn’t be news to anyone who scouted him for the 2018 NFL draft.

It’s not only the defense that has struggled early on though. While Antonio Brown is still Antonio Brown his production has tapered off a little because of Big Ben’s play. After starting off slow, Ben Roethlisberger has really gotten back on track over the last two weeks. It is clear the team is missing star running back Le’Veon Bell though. While James Conner has done fine and produced on the ground, the offense just isn’t as dynamic as it has been in years past. Part of this is because the Steelers don’t have a reliable pass-catching back to take the load off Big Ben and the whole offense.

Overall, the Steelers look to be in some serious trouble early on. Their defense can’t stop anyone so they may have to rely on putting up ridiculous point numbers in order to win week in and week out. But the way this division has looked so far that might be hard to do.

Entering the season this is one of the last things many thought they would say. But it is true, the Bengals are the AFC North leaders currently. This certainly comes as a shock for many as they were widely projected to finish last in the division this year. Instead, the team is sitting at 3-1, coming off a big win versus the Falcons.

To start, one of the most shocking things about this team is the offense. While the team does have huge playmakers in A.J. Green and Joe Mixon, they aren’t the only ones producing. Quarterback Andy Dalton has had his struggles but overall looked great and very confrontable in the offense. He has been able to find wide receiver Tyler Boyd a little too. The Bengals defense has been successful as well. Thanks in large parts to rookie Jessie Bates and pass rusher Carlos Dunlap in particular. Both have been key pieces in the defense and have had great success early on.

Are the Ravens Back?

It’s a good question, are they? It may be too early to say for sure but early impressions are that they may be. Early on Joe Flacco has looked very good. He has looked to get back to his old self and is playing good football. But the most exciting part for Ravens fans must be the defense.

The team is currently number two in the division and is 3-1 to start the season. Outside of week two (where they played the Bengals), the defense has been able to hold the opposing team to under 14 points each week. Pretty impressive for a team with young players scattered through all levels of the defense. Pass rusher Terrell Suggs has found great success early on, contributing for 11 tackles and two and a half sacks thus far.

So far from all indications, it looks like the Ravens may be back and potentially dangerous if their defense continues to improve.