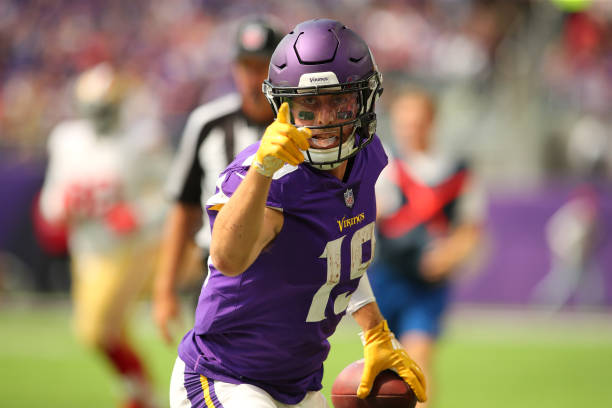 We are a quarter of the way done with the NFL season. Wow, seriously, that sucks, it’ll be Super Bowl Sunday before we know it. But until then, there are still a lot of NFL games left to watch and a lot of fantasy football left to play.

Before the season started the Vikings upgraded their quarterback when they signed Captain Kirk Cousins to a three-year, fully guaranteed deal. The fantasy community then started the debate, Stefon Diggs or Adam Thielen.

Agreed Cooper was hurt last season and wasn’t reliable at all 😱🔫 I just can’t believe in Diggs. He’s one of those guys that I want no part of, give me Thielen.

I stated before the season started I preferred Thielen over Diggs and four weeks into the season, nothing has changed. Not only is Thielen out-snapping Diggs, 277 (97.54%) to 243 (85.56%). He is also outscoring Diggs in fantasy points.

He has at least 100 yards in all four games and two touchdowns. Dude even has some fight in him. Did you see how ticked off he was when they wanted to check him for a concussion against the Rams? He then came back into the game and scored a touchdown.

In the same half-point scoring format Diggs has scored a total of 63.5 fantasy points, 15.88 average per game. He has a high of 29.4 points and a low of 3.7 points. That will make you want to throw your phone.

We know who Cousins likes and it’s the player you should like also: Adam Thielen. Everyone said Diggs has the higher ceiling, and yes, he outscored Thielen once so far this season by four points, but those four points do not make up for how consistent Thielen has been this season.

A little fun dynasty story. Two years ago in one of my leagues, someone had both Thielen and Diggs. This individual, a Diggs Truther, traded Thielen away for a third-round pick. Not only did he severely undervalue Thielen, but he traded the wrong wide receiver away. Make sure you’re hooked on a Thielen.