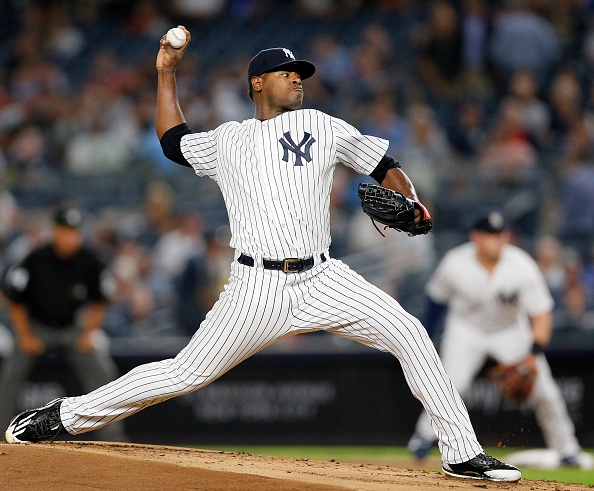 The New York Yankees host the Oakland Athletics at 8PM ET tonight. While the Yankees set the major league record with 267 HRs, the A’s were no slouch clubbing 227. With a bullpen game likely in store from the A’s side, the Yankees throw Luis Severino who couldn’t get out of the first inning last year. This could be a slugfest.

The New York Yankees vs. The Oakland Athletics

The Yankees are going with Luis Severino. He has pitched decently lately and has some interesting stats. In his last four starts, Severino is 2-2 with a 3.98 ERA. He has given up 20 hits in 20.1 IP but no HRs. Oakland has batted .297/.350/.378 vs. him this year without hitting the ball out of the park. Part of the decision for starting Severino tonight hinges on the fact that they want him at home. The next series, if the Yankees get past Oakland, will be in Fenway Park for the first two games. By the Yankees going with Severino here, they get to have JA Happ and Masahiro Tanaka for the first two games of the NLDS and have Severino back home on regular rest for game three.

The A’s are going to start an opener in Liam Hendriks. He will likely just go the first inning and then give way to either Trevor Cahill or Mike Fiers. Edwin Jackson is a possibility but he has not had success vs. many of the Yankee bats. Mike Fiers would seem the logical choice since he last pitched Friday. He also pitched well against the big Yankee sluggers. Giancarlo Stanton, Aaron Judge, and Brett Gardner are a combined 9-41 against him with only 2 HRs and 14 Ks.

Jed Lowrie hits Luis Severino quite well going 6-11 in his career against the Yankee right-hander. Mark Canha is the only player on the A’s roster to have a HR vs. Severino in his career. Oakland is a new animal this year though with the emergence of Matt Chapman, Matt Olson, and Khris Davis with his league-leading 48 HRs.

Andrew McCutchen crushes the starting staff of the A’s. He is an amazing 30-83 with 8 HRs combined vs. Trevor Cahill, Mike Fiers, and Edwin Jackson. The Yankees set a major league record with 267 HRs during the regular season. There is no reason to think they won’t be shooting for the long ball in a winner-take-all game.

Severino needs to start off strong or he could suffer the same fate as last year. The A’s going with an opener is not surprising considering their lack of an ace. Look for power between these two teams. While the Yankees set the major league mark for HRs, the A’s hit 227 of their own. I see fireworks tonight from the lineups. My prediction is one of the A’s bullpen arms gives up a late one, possibly to Didi or Gardner. Yankees win 10-8.