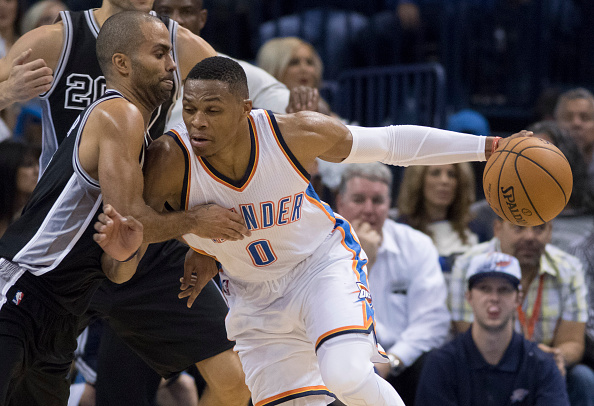 The Oklahoma City Thunder’s big names will be targeting a trip to the Finals this year, but can they overcome years of disappointment to topple the stiff competition out West?

The Thunder’s most recent campaign was an experiment which did not go as planned. They made major moves in the offseason, trading for all-stars Paul George and Carmelo Anthony to partner with reigning MVP Russell Westbrook. With the ‘OK3’ formed, the Thunder were transformed into a serious Finals contender in the eyes of many. However, it quickly became clear that the roster, loaded with ball-dominant players, did not look as good on the hardwood as it did on paper.

Occasionally, everything clicked for the Thunder. They scored a few notable victories against the teams they were expected to battle for the title and Westbrook, for the second successive season, averaged a triple-double. Yet despite this, they too often fell to less talented, but more cohesive teams, finishing the season with an underwhelming 48-34 record and the fourth seed. These issues resurfaced in the playoffs as the fifth-seeded Utah Jazz, perhaps the ultimate team unit in the NBA, stunned Oklahoma City by defeating them in six games, bringing the curtain down on a forgettable year.

The subsequent offseason was just as eventful and headline-grabbing as the previous summer. It all kicked off as soon as free agency opened with George, a free agent, ostensibly announcing at a party held by Westbrook that he would be re-signing with the Thunder in a dramatic twist. The general consensus around the league was that George would sign with his hometown team the Los Angeles Lakers, but surprisingly he rejected the bright lights of La La Land to stay in the smallest market of all.

Anthony and his huge contract ($25m for one year) were shipped to the Atlanta Hawks, with point guard Denis Schroder and wing Timothé Luwawu-Cabarrot coming the other way. Elsewhere, free agents Jerami Grant and Raymond Felton were re-signed, along with center Nerlens Noel, who left the Dallas Mavericks for the Thunder after his contract expired.

Carmelo Anthony was a significant problem for the Thunder offense last season. The 35-year-old refused to adapt his game to compensate for his declining athleticism, and his poor shot selection seemed to drain the entire team, crippling spacing and ball movement. With him out of the picture, Oklahoma City’s offense will improve simply because he is not there anymore. Jerami Grant, his replacement in the starting 5, will not set the world alight, but the departure of Anthony is addition by subtraction.

But it would be naive to believe that Melo was at the root of all of OKC’s problems. Westbrook is notorious for chucking up shot after shot and trying to beat the opposition on his own. Alongside Melo, he was the main reason why the Thunder had the second-highest isolation frequency last season. This tunnel vision mentality was exaggerated in the recent Jazz series, where he attempted 82 field goals in games 5 and 6 alone. Moreover, he led the league in turnovers, as the criticisms over his decision making as a point guard piled up.

There are also question marks over how well Paul George fits heading into the new campaign. His numbers in points, free throws, and field goal percentage took a dip last season, and he too had a poor postseason, scoring a mere five points in the decisive game 6 in Utah. Beyond the frailties of the Thunder’s stars, guard Andre Roberson‘s atrocious shooting is the biggest concern of all. He scored just five points a night despite averaging 26 minutes last year, and his career free-throw percentage (46%) makes him unplayable in late-game situations. This lack of offensive mettle means opposing defenses can ignore him, thus allowing them to swarm the likes of Westbrook and George.

Of course, the raw ability of individuals on the Thunder roster alone give them a solid offense. Westbrook is a sensational athlete who can be unstoppable at the rim and find his team-mates with jaw-dropping passes. Skeptics believe he obsesses over his stats too much, but a player does not average a triple-double for the season without being supremely gifted. As for George, he ranked third in three-point percentage for players who attempted over 500 triples and is likely to be OKC’s only consistent threat from deep. Additionally, center Steven Adams is not an elite scorer, but he was the joint leader in offensive rebounds last season, giving them several crucial extra possessions in what was a breakout year for the 25-year-old.

The Thunder offense is far from abysmal. But it is yet to live up to its sky-high potential.

Alternatively, the Thunder should have little worries regarding their time without the ball ahead of the coming season. They ranked a respectable tenth in defense last time out, and that was with a past his prime Carmelo putting in little effort without the ball.

The key to their success will be Roberson, who makes up for his offensive limitations by being one of the NBA’s best perimeter defenders. His 2017-18 season was cut short by a horrible patellar tendon rupture, but he ranked fourth in defensive win shares and was on his course to be a serious contender for Defensive Player of the Year. With Roberson, the Thunder were the fifth best defense in basketball. Without him, they ranked 15th. Fortunately for OKC fans, he should be fit for the start of the season, and they need him to be. The numbers speak for themselves.

Paul George is another excellent defender. He is long enough to lock down the league’s best small forwards and has the necessary speed and agility to cope with being switched onto guards. What’s more, his high IQ and fast hands mean he is always capable of a steal, a category where he ranked second last season (OKC as a team ranked first in this category also). Elsewhere, Adams is a very strong one-on-one defender in the post and is the Thunder’s anchor, Westbrook a phenomenal guard rebounder, and Grant will certainly be an upgrade on Melo.

So, what are the negatives for Thunder on the defensive end? A popular criticism is the attitude of Westbrook who, for all his dynamism and tenacity, has poor concentration. He can regularly be caught ball-watching, leaving his man open. This lack of focus on the defensive end could cost OKC in the coming season.

Yet this is the only major issue for the Thunder defense ahead of the season. They possess multiple players who can make life miserable for opposing offenses and if they can defend as a unit, they undoubtedly will be one of the West’s best teams.

OKC’s second unit will be led by Schroder, who is an intriguing new piece. Like Westbrook, he is a ball-dominant point guard who can be highly inefficient, suspect on defense and lack a team-first mentality, implying that he is an awful fit. On the other hand, he is arguably the best backup one-guard in the league and has much-needed playmaking abilities, which will lighten the load on Westbrook’s shoulders and perhaps mean he can play a little off the ball, if coach Billy Donovan decides to play him and Schroder together. This acquisition is one that could go either way for the Thunder, and with Westbrook set to miss training camp and possibly even the first few games for ‘maintenance’ knee surgery, Schroder has the perfect opportunity to prove himself.

Noel, another recent addition, should ensure that the Thunder defense remains one of the league’s best when Adams is not on the floor, adding depth and versatility at the five. However, outside this pair of new faces, OKC will not be expecting their bench players to make a significant impact. Alex Abrines is a handy sharpshooter but nothing more, while the likes of Patrick Patterson and Terrence Ferguson have shown little to suggest that they will be able to make a difference this season.

If everything goes right for the Thunder, then this team has limitless possibilities. They possess one of the league’s best players in Westbrook, an exceptional wingman in George and, like all the great teams, have a water-tight defense.

Yet whether it was last season, or back in the Kevin Durant era, OKC has constantly failed to live up to hefty expectations. Now, with the Western Conference as tough as ever, history will surely repeat itself.

With Roberson returning and Anthony off the team, the Thunder should be a little better than last season. They will win between 49-52 games and be around the fourth or fifth seed. But there is nothing to suggest that they will be able to get out of the first round of the postseason if their stars’ previous playoff shortcomings are anything to go by. In the stacked West, this would not be a total disaster for OKC, but a familiar feeling of under-achievement is set to be persistently lingering.