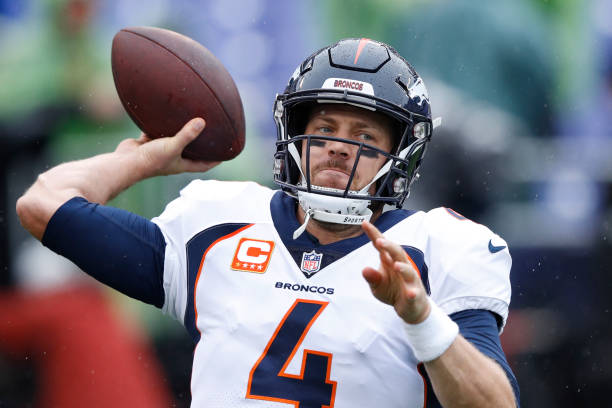 Week 3 brought us the emergence of Baker Mayfield in Cleveland. He led the Browns to a comeback victory over the New York Jets and Sam Darnold. Baker won the first battle of many between the top two quarterbacks of the 2018 draft and looked damn good in relief of Tyrod Taylor. The fantasy quarterback battle of the century between Big Ben and Ryan Fitzpatrick did not disappoint at all and the Rams look like the team to beat this year and are a complete fantasy juggernaut. Oh yeah, and the Bills beat the Vikings in Minnesota.

Keenum takes on the Chiefs this week at home in Denver. The Chiefs are becoming THE matchup to target for fantasy quarterbacks. They are somehow tied with Tampa Bay for most passing yards allowed through three weeks. Quarterbacks average 363 Yds/G against the Chiefs and they have surrendered eight passing touchdowns, good for a tie for second-worst in the league. The Chiefs seem to have adopted the game strategy of just beating every opponent in a shootout and it’s worked so far. We don’t care who wins the game, just that it is filled with fantasy production. Case Keenum hasn’t thrown a touchdown in two weeks so he should return to the mean this week with at least two TDs and 250 yards. Expect a shootout again in this game on Monday night in Denver. Plus it’s always nice to have your quarterback going on Monday night.

Flacco has six touchdowns through three games, a nice two touchdown average for Average Joe. Flacco will look to continue his good play against the Steelers this Sunday night. Ben Roethlisberger lit up the Buccaneers and Flacco will have to do the same to remain competitive. Pittsburgh also wasn’t able to stop the Buccaneers pass attack. Ryan Fitzpatrick threw for 411 yards and three TDs, and while Flacco won’t put up those numbers, he will be a serviceable streamer. The Steelers gave up 42 points at home against Kansas City in Week 2 when Patrick Mahomes had six touchdown passes. A Steelers defense that has given up nine touchdown passes in two weeks is a defense worth attacking with a streamer quarterback.

If Jack Doyle is out again this week, Ebron will once again be the top streaming option at TE. Doyle missed practice Wednesday and Thursday and HC Frank Reich called Doyle “week to week.” Ebron saw a team-high 11 targets last week vs. Philadelphia and will have another week of high target volume should Doyle sit. The Colts host the Texans this weekend, who allowed Rhett Ellison to score in relief of the injured Evan Engram. Given his target share, it would be hard to find a better streaming option.

Dallas Goedert, Philadelphia’s rookie tight end saw seven targets and scored a touchdown last weekend in the return of Carson Wentz  Wentz has a real knack for getting the ball to tight ends, which makes Goedert an interesting play. The Eagles are also razor thin at receiver so Ertz and Goedert are essentially top three options for Wentz along with Agholor if Alshon Jeffery can’t play. Even if Jeffery does play, he could be mostly used as a decoy. Ertz saw 10 targets to Goedert’s seven so Wentz has no problem sharing the love between his tight ends despite Ertz’s elite status. I expect the story to be the same this week against the Titans. Tennessee has a stout defense and good cornerbacks so the tight ends could both be in for a big day.

Green Bay: The Bills shocked the Vikings last week in Minnesota, but another road game, this time in Lambeau Field, should bring Josh Allen and Buffalo back to reality. The Bills were gifted fantastic field position all game against the Vikings so the final result was a little misleading. The Bills could fall behind quickly this week against Aaron Rodgers forcing Allen to throw often. With no weapons worth worrying about and the signing of Bashaud Breeland boosting the secondary, the Packers defense will be in a nice position to find some confidence. Josh Allen is sure to make a few mistakes by way of interceptions. Clay Matthews will probably get called for another roughing the passer this week because Buffalo has given up a league-high 14 sacks already.

Seattle: Seattle gets to face Josh Rosen in his first ever career start. Josh Rosen entered last week’s game with just under five minutes remaining in the 4th quarter and immediately threw an interception on his first drive, and almost threw another one. The Seahawks have a better than advertised defense despite the loss of star players. In the past two weeks, the defensive unit has scored eight and 14 fantasy points. Seattle has at least two interceptions each game and that streak is bound to continue against the rookie Rosen. Seattle is a great option this week.

My kicker pick of the week is Adam Vinatieri of the Colts. The Colts host the Texans in Week 4 who just allowed the Giants to score 27 points. The Colts have stuck to a dink and dunk offense so far, which will lead to more field goal attempts than touchdowns against a struggling but good defense. The game will be played in a dome and Vinatieri has two double-digit fantasy weeks already this season.

For all the same reasons I like Joe Flacco, I like Willie Snead. Snead has seen at least five targets each game this season and scored in Week 1. Flacco spread the ball all around in Week 1 and will have to do the same this week. Snead is a good boom play ranked at WR64 this week with a pretty good chance to score.

Again a recommendation to pair with the quarterback. Courtland Sutton has maybe his best shot yet to score his first touchdown in the NFL. A touchdown machine at SMU, the rookie will face the Chiefs at home. Sutton is a big play threat averaging 18.2 YPC. This matchup is made to be his breakout game.