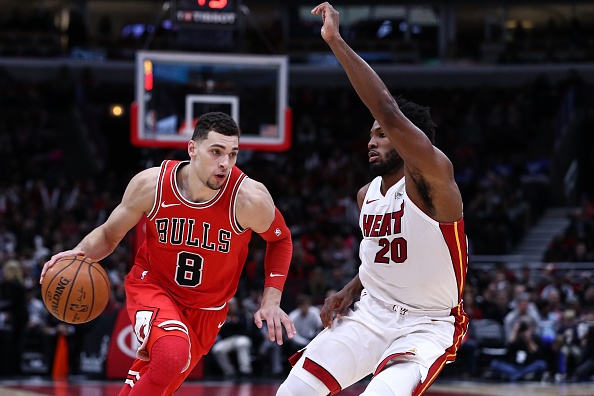 The 6-Time World Champion Chicago Bulls have a storied history but haven’t made it to the NBA Finals in 20 years. They may be a few years away from a Finals appearance but can they take a step forward and get into the playoffs?

Last season didn’t do anything to help matters by going 27-55 last place in the Central Division but it did land the team 7th pick in the NBA Draft which they used to select Duke Forward/Center Wendell Carter Jr. The Bulls did uncover what looks to be a cornerstone piece in Forward Lauri Markkanen who went on to average 15 points and 7 rebounds en route to being named to the All-Rookie NBA first team. Zach LaVine is looking fully healthy after his ACL injury that limited him to 24 games played last season. The injury didn’t stop the Bulls from keeping Zach around long-term matching the contract he was offered by the Kings at four years worth $78 million. But even with that deal in place, it doesn’t make him the highest paid player on the team this season. That honor goes to the main free agent signing Jabari Parker. who signed a two-year deal worth $40 million with the second year of the deal being a team option.

For years Bulls coach Fred Hoiberg has thought what his offense would look like if he had the right players that fit. We still won’t know the answer to that question until the season actually gets underway and we see this team take the court. With so many young players and with adding Jabari to the mix it will be interesting to see how Fred uses all his players. Last season the Bulls averaged close to 103 ppg which ranked 26th in the league and with an offensive rating of 103.8 ranking 28th, the team can only improve this season. With a healthy Jabari Parker, the Bulls added a potential 20-plus scorer and he will have a solid season to remind everyone why he was the #2 pick in the draft coming out of Duke. Before his second knee injury in the 2016-17 where he played in 51 games he was averaging 20 ppg. By all accounts, Zach LaVine is fully healthy this season and is primed for a breakout. Coming back from the torn ACL last season, LaVine only appeared in 24 games where he averaged just under 17 ppg. That number along with his assist (3.0 apg) and shooting percentages (38% FG & 34% FG3) will have to increase for the Bulls’ offense to find success and balance this season. Where and how Hoiberg uses Markkanen will be the key. I would like to see him improve on his rookie season and increase his percentages across the board. The Bulls for all intent and purposes will go as far as those three take them this season and moving forward. If Kris Dunn can improve his offensive game to catch up with his defense that would be an added bonus of another double-figure scorer. Big man Robin Lopez is still the anchor in the middle for the team for as long as he is on the roster. Last season he was a solid veteran on a young team and still averaged double-figure scoring for the Bulls. 3-point shooting will be an issue for Chicago as they don’t have many shooters and spreading the floor is one of the main things Hoiberg likes to do when running his offensive sets. The Bulls will have to figure out a way to outscore teams until they can figure out what identity this team will have.

This is going to be the biggest area of concern for the team this season. We all know that PG Kris Dunn is the team’s best defender when he is on the court, but he only played 52 games last season with various injuries. Chicago needs him on the court to help with the overall team defense. The team ranked 24th last season in defensive rating and that has to improve if they have any hopes of not having another last-place finish in the division. The Bulls don’t have a lot of individual defenders so they will have to buy into team defense to give themselves any chance of staying in games this season. Most people feel the best spot for Parker to play is the Power Forward position. But having Markkanen playing the majority of his minutes there, the Bulls will start Jabari off at the Small Forward spot. This will be interesting to see if he is able to contend night in and night out guarding one of the deepest spots in the league. The Bulls’ rim protection will be key as well as the Bulls finished dead last in blocks per game last season with under 4.

The Bulls should be able to find solid production from the bench with Bobby Portis looking to continue his improvement from a season ago where he averaged career highs in both points and rebounds. Portis put in a ton of work during the offseason and has let it be known that his goal is to become the sixth man of the year. But minutes will be a hard thing to come by especially for the frontcourt players as Carter Jr. is expected to see minutes at two different positions as well. It will be interesting to see how the team handles the back up point guard duties. Cam Payne looks to finally be over his injuries and with the trade of Jerian Grant this offseason, there are now minutes in the backcourt. There will be a battle for those minutes with the return of Justin Holiday and Denzel Valentine, along with rookie Chandler Hutchison and G-League Rookie of the Year Antonio Blakeney. Last season while in the G-League Blakeney averaged 32 ppg and with the main club in 19 games he averaged 8 ppg. The Bulls are hoping he can become a contributor off the bench and provide instant offense for the team.

The Bulls are in my mind the biggest high risk – high reward team not only in the Eastern Conference but in the entire league. If all the chips fall into place with team chemistry and health this team could realistically find themselves in the playoff hunt. If those things don’t fall into place then the Bulls could be staring at another rebuild while adding another high draft pick to the mix. In many respects, this is a make-good season for not only the players who the Bulls decided to give big money to this past offseason but for coach Hoiberg as well. I think they will find a way to win 42 games and finish with the 7th or 8th seed in the eastern conference. They have enough talent to win games this season. The two question marks will be how healthy can this team remain and if they will buy in on the defensive end. They have an opportunity to change the narrative this season because no one is picking them to even equal the win total from last season. With Jabari coming back to his hometown, I think he will become the player everyone thought he could be when he was coming out of Duke as the second overall pick.