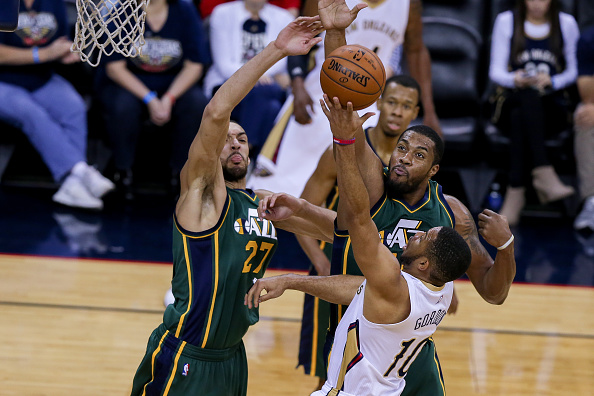 The Utah Jazz do not possess the star power of their conference rivals, but their defense-first system means they are a force to be reckoned with. The question is, can their strong team unit make up for their lack of big name players?

After losing franchise centerpiece Gordon Hayward in the 2017 offseason, few believed the Jazz could repeat their success of the previous campaign, where they finished as the fifth seed out West and made the conference semifinals. And after a loss on the road to the lowly Atlanta Hawks on January 22 took Utah’s record to an underwhelming 19-28, they seemed destined for the lottery. Then, out of nowhere, everything clicked. Led by the shrewd coaching of Quin Snyder, Defensive Player of the Year Rudy Gobert, and rookie sensation Donovan Mitchell, they won 29 of their final 35 games to once again finish as the fifth seed with a 48-34 record. The red-hot Jazz carried their good form into the postseason, as they stunned the big three of the Oklahoma City Thunder. Despite not having homecourt, Utah’s robust team unit was enough to see off Russell Westbrook et al in six games. They could not repeat the trick in the second round, with the top-seeded Houston Rockets defeating them in five games, in what proved to be a series too far. Nevertheless, the Jazz surpassed all expectations last time out.

The offseason that followed was rather uneventful in Utah. They drafted Duke legend Grayson Allen with their only pick, before re-signing Dante Exum, Derrick Favors, and Raul Neto as soon as the free agency moratorium ended. The only departure of note was Jonas Jerebko, who the Jazz waived.

As was the case last year, the Jazz will be spearheaded by Mitchell, a dynamic, explosive combo guard who is a destructive finisher inside, a solid jump shooter, and a fearless competitor under the bright lights of the playoffs. After finishing runner-up in Rookie of the Year voting, only injury or the notorious ‘sophomore slump’ will prevent him from improving on last season’s superb showing, where he averaged 20.4 points per game. Elsewhere, much of the Jazz offense will be conducted by veteran point guard Ricky Rubio; the epitome of Utah’s philosophy. The Spaniard will not get fans out of their seats with a jaw-dropping highlight but, like the collective unit around him, he is unassuming, intelligent and, above all, capable of performing when it matters most. His pass-first mentality allows the likes of Mitchell to get some routine buckets, but he is also capable of scoring himself: as well as leading the Jazz in assists (5.3) last season he also had four 30-point games; more than Marc Gasol, John Wall, and Klay Thompson.

The Jazz will be reliant on their first-choice backcourt to create the bulk of the team’s offense this season. Nevertheless, the remainder of their starting five can make key contributions. The aforementioned Gobert runs the pick and roll very effectively, and Snyder likes to use him for handoff plays. Meanwhile, he uses his 7’9″ wingspan to finish off lobs and scoop up offensive rebounds. When paired with Favors, Utah can physically dominate opposing defenses with their two fantastic screeners. Moreover, wing Joe Ingles made 44% of his triples last season, a figure bettered by just three players across the league, with his smart movement and length giving him many open looks. However, none of these three players can be expected to put up big offensive numbers on a regular basis.

As a team, Utah’s offensive statistics are underwhelming; they ranked 19th in points per game and 15th in offensive rating last season. Their style of play was equally unspectacular, with their pace (97.78 possessions per game) slower than all but five teams in the NBA, indicating that they prefer the half-court game over the transition one.

The Jazz offense is not bad, but not brilliant either. It is on the other end of the floor where the roots of their success lie.

The Jazz have one of the best defenses in basketball. Gobert leads the way, protecting the rim superbly. Last season, the center averaged an outstanding 2.3 blocks a night, and Utah gave up the second-least points in the paint in the league. His sheer presence in the lane is enough on its own to make smaller guards think twice about driving to the basket. Admittedly, his freakish size is somewhat a double-edged sword, as the Frenchman is vulnerable when forced to defend on the perimeter, even if his long arms allow him the opportunity to recover when guards blow by him. Regardless, when his abilities in the paint are considered, this is a price the Jazz are willing to pay.

However, Utah’s defensive prowess is a result of coach Snyder’s ability to turn average defenders into lockdown stoppers. Gobert missed 26 games last season, but the Jazz still managed to finish with the second-best defensive rating in the NBA, as Snyder ingrained the attitude of never letting up without the ball into his players.

In the previous campaign, Mitchell, Ingles, and Rubio joined Gobert in the top 20 for defensive win shares. Mitchell was a rookie, Ingles a spot-up shooter with no real physical presence, and Rubio ranked 246th in this category the season before in Minnesota. The fact that this trio was so effective on the defensive end is a testament to Snyder’s coaching abilities.

The coming season should be no different. With all of Utah’s key pieces returning to Salt Lake City, they should simply continue to dominate defensively, and their ability to thwart their opponent’s offense runs right through the roster.

The Jazz squad is packed full of players who can either contribute off the bench or fill in as a starting spot when required. Sixth man Jae Crowder will be pivotal for them again, as the forward provides valuable floor spacing with his reasonable three-point ability, and fits the bill as a strong, versatile defender. After arriving from Cleveland at the trade deadline last season, he has added a new dimension in Utah. The five of Crowder, Rubio, Mitchell, Ingles, and Gobert had the best net rating of any line-up in the NBA that totaled over 150 minutes together last season. This Utah team will be able to hang with anyone.

The trend of tough defense and satisfactory, if not sensational, offense continues as one goes deeper into the roster. Dante Exum is an oversized guard who can cope with constant switches, create offense for himself or others and, at 23, could be set for a breakout season. Royce O’Neal and Thabo Sefolosha are archetypal three-and-D players for the modern NBA. Allen, if nothing else, will frustrate the living hell out of opponents if his Duke years are anything to go by. These pieces will be vital over a long campaign.

The Jazz are the dark horse of the Western Conference. Surrounded by the Golden State Warriors juggernaut, LeBron James‘ Lakers, and the James Harden and Chris Paul-led Rockets, they will not be in the headlines much over the next six months, and their playing style reflects this. Yet Snyder’s system of strangling defense, combined with Mitchell’s scoring ability and a strong bench puts them right up there with the best in the conference, excluding the Warriors.

But the NBA is a superstars’ league, and Utah does not have one. Although Mitchell may get there one day, the scoring burden he will have to endure is likely too great for a second-year player. And while their defense will be enough to win them games against the majority of the league, it is not enough to topple the best of the West on its own.

Consequently, the Jazz, who are still in the stage of promising potential instead of heavy expectation, are set to have a familiar season. They will win between 50-53 games, which should be enough for the fourth or fifth seed in the West. In the playoffs, they will once again reach the conference semifinals but no further, as their lack of a true superstar continues to prevent them from making the jump from very good to great. This may not be an improvement on last year, but another season with this outcome would reiterate that the Jazz are on the right path to long-term success.