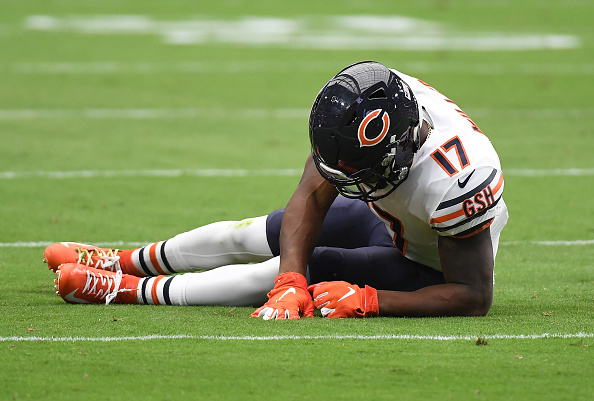 A shoulder dislocation is a frequent injury suffered by athletes such as football players because of the collisions and violent contact with other players and the ground. That statement became true when Anthony Miller experienced a left shoulder dislocation in Sunday’s game against the Cardinals.

The shoulder is the most mobile joint in the human body, but as such, it is also one of the most frequently injured joints. The humerus (upper arm bone) loses all contact with the shoulder joint when a dislocation occurs. Another term that is heard in regards to the shoulder is a subluxation or separation, this occurs when partial contact between the bone and joint occurs. Both injuries result due to laxity and tearing of the tendons and muscles that hold the humerus in the joint space.

Once a shoulder has been dislocated the risk for reinjury is constant due to laxity and damage to the supporting structures in the shoulder joint. In fact, a whopping 50% of all first-time shoulder injuries result in a recurrence of the dislocation within one year of the initial injury.  Non-operative treatment (conservative rehab) of a football player who dislocates his shoulder for the first time has up to a 50% failure rate due to the high forces experienced by the shoulder in these activities and a greater than 85% failure rate is reported in players who elect to forgo surgery for conservative rehab. This explains why a significant number of these athletes ultimately elect surgery in the offseason for definitive treatment and a return to pre-injury performance levels. The success rate of surgical repair of a dislocated shoulder is reliably greater than 90%. Most surgeries are performed arthroscopically to reduce the overall recovery time. The success rate for surgery is dependent on the postoperative rehab including the commitment to adequate physical therapy to ensure maximum range of motion postoperatively. This success is defined as no further episodes of instability with the ability to resume strenuous activity.

Most football players who dislocate their shoulders for the first time can usually return to play within four to six weeks of the injury once they reestablish a full range of shoulder motion and strength. They must be able to perform all of the actions necessitated by their position prior to return to play. Those players who undergo surgery usually require five to six months of rehabilitation before they are able to resume contact and collision sports. Initially, after the dislocation is reduced, the shoulder is stabilized in a sling and the joint is iced to reduce swelling. Once pain has subsided, the athlete begins to rehab the shoulder and strengthen the supporting muscles of the upper arm.

Skill position players (WR, TE, RB) and defensive players (CB, Safety) whose position requires that the arm is fully extended over the head generally take longer to recover than other positions. Athletes whose position doesn’t require full arm extension and elevation can return sooner by using a shoulder brace to help stabilize the joint.  Most skill players can’t use a brace because it limits the ability to fully elevate the arm above the shoulder.

Getting Anthony Miller back to the playing field will be a pain management and stability issue short-term, however, given the recurrence rates following initial injury, surgery as soon as possible is the best ultimate course for Miller and his long-term success as an NFL receiver.