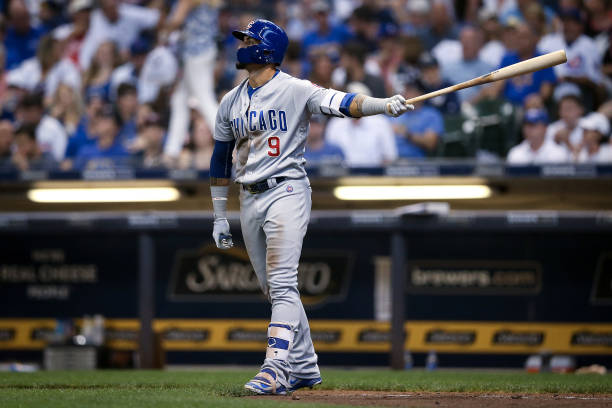 Here we are in the final week of the 2018 season. I decided to cut my list down to the Super Six this week, as they are the only ones who can actually play in October. Tune in next week as our Playoff Preview will drop.

1. Chicago Cubs (even 91-64) Taking care of business, as usual, the Cubs handled their road trip easily. Going 5-1 over this past week will help keep the Brewers at bay in the Central. The leading club will have to do without Addison Russell for an undisclosed amount of time, as he has been placed on administrative leave for allegations of domestic violence. Another potential boost to Javier Baez‘s chances for the NL MVP, as he slid into shortstop and belted his team-leading 34th home run. Matter of fact, Baez leads the Cubs in runs, runs batted in, stolen bases and home runs. What other players in the NL have been this important to a team? The Cubs start what could end up being a very long home stay, first three against the Pirates and then finish off the season in what could be a very important matchup against the Cards.

2. Milwaukee Brewers (even 89-67) Another week, another couple of series’ win for the Brew Crew. This is the perfect opportunity for the Brewers to punch their ticket into the postseason for the first time since the 2011 season where they went all the way to the NLCS. Starting the week off in Busch Stadium, the Brewers look to improve on their putrid NL Central results (36-37) by taking at least two of three from the Cards, if they do that, they should easily take a wildcard position. Jack Flaherty will stand in their way to open up the series, he has dominated the Brewers in the three meetings he has had against them. Totaling 18 innings two earned runs with a whopping 28 strikeouts in his three appearances, he will make sure to put up a fight for the wildcard.

3. LA Dodgers (+3 87-69) Last week I mentioned this was the Dodgers week, steamrolling the Rockies, then easily taking two of three from the Padres. Regaining the lead in the West, the Dodgers look to chop the Diamondbacks head off and squash the Giants to finish out 2018. Currently, Clayton Kershaw is scheduled for two starts, though I don’t think he will need to make his second on the final day of the year. This team is deep, pretty healthy for playing five months of baseball, but must continue their high level of play to hold off the Rockies who still are in striking range. Look for Yasiel Puig to make a huge impact in the middle of the week, as they face three righties in a row. The splits are real with Puig, as you will see him sit versus lefties more often than not due to a very disappointing .206/.271/.369 with only four long balls.

4. Atlanta Braves (-1 88-68) Clinching the NL East crown earlier in the week, the Braves will now look to finish out the season healthy as they prepare for the Postseason. Dropping the first two games to the Cardinals potentially was the catalyst to the Braves recent five-game winning streak. Anibal Sanchez completed the four-game sweep of the once hopefully Philly Phanatic’s with another decent outing, five innings of one-run ball. A bright spot in the Braves’ rotation, Sanchez is having a resurgence of a year, over the course of 125.2 innings he is rocking his best ERA since 2013 career year of 2.57. Other key underlying numbers also suggest that he will provide some much-needed rotation depth going into the playoffs. One big reason he has found some old success is throwing something more, the Cutter(13.9% more than 2017). Opponents are slashing .202/.234/.342 with a 27% whiff rate.

5. St Louis Cardinals (-1 87-69) Another rough week in the books for Matt Carpenter, fortunately, this didn’t mean another rough week for the Cardinals. They impressively flexed their muscles against the NL East champs, taking two of three, then decisively took all three from the Giants. They hope the MVP version of Carp shows up in this first series versus the Brewers. Over the course of September, he is striking out at the highest clip of the year(31%), while overall slashing an embarrassing .176/.321/.206. After hitting a minimum of eight home runs in each of the last three months, Carpenter is still looking at a massive goose egg. If he can’t get it going, Flaherty better put this team on his shoulders in this first game against the Brewers and lead the Cardinals into the postseason. The Cardinals are an impressive 10 games over .500 (40-30) in their division but will have to hold off the Rockies as they are only 1.5 games ahead for the second wildcard spot.

6. Colorado Rockies (-1 85-70) Losing a brutal three-game set against the Dodgers at the beginning of the week almost wrecked their season. They did manage to salvage the week by sweeping the D’backs out of the playoffs. Nearly losing star shortstop Trevor Story to an elbow injury, the Rockies must dig deep and go on a roll in these last seven games against the Phillies and Nationals. Non-playoff teams, but do not underestimate this week, as it will be the biggest challenge so far. Astonishingly, they only are plus one in run differential all year. German Marquez, Kyle Freeland must keep their dominant ways of recent memory going, while Jon Gray must match their level if this team wants a shot. Trevor Story still has no timetable for his return, which they could desperately use his production in Coors. Slashing an impressive .301/.358/.659 with 23 bombs, he could push his name up that MVP voting by putting this team on his back, but it doesn’t look like they will push the issue with his ailing elbow.

We are going to focus on this intense NL Central race this week. The Brewers travel to St. Louis with hopes of leaving with a playoff berth. While the Cardinals look to spoil those plans and potentially push for the Central title like I predicted earlier!