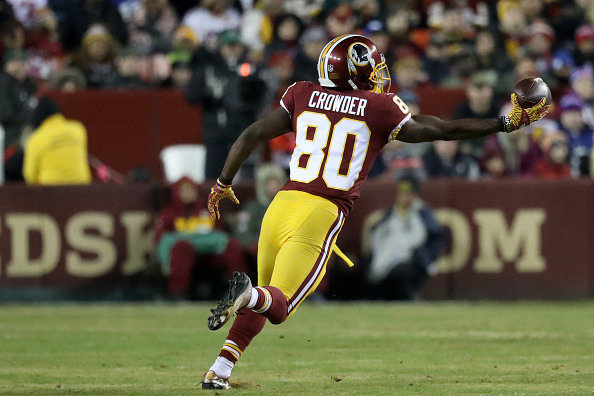 This week I am filling in for the always intelligent Brian DeWester and will be providing some buy-low and sell-high options heading into Week 3 of the NFL regular season. I don’t know Brian’s stance on these players as I write this, but if you have any issues with these recommendations be sure to tweet at Brian and tell him how bad his replacement was for Week 3. The goal of this article is to improve your roster for the long-term and help shape a championship run. Preparation is paramount when making a push for the playoffs and even though it’s only week 3, it’s never too early to get started. Things change in an instant, trade talks come and go, so hop on those opportunities before your league rival changes his mind.

The 40th receiver off the board in drafts has had a disappointing start to his season. Fantasy owners seem ready to give up on him. I have seen people even drop Crowder, which is unwarranted considering how few offensive weapons the Redskins have. Crowder clearly hasn’t developed a strong connection with his new quarterback Alex Smith yet, only amassing eight targets through two weeks. This probably stems from a few factors. Adrian Peterson has been fed the ball on the ground heavily so far, which probably can’t last all season. It also seems Chris Thompson has soaked in all of the targets from Alex Smith this year with Jordan Reed cleaning up the leftovers. There is room to grow for Crowder with Smith as I mentioned in my Week 3 Streaming Options article yesterday. Alex Smith has a success rate of 70% when targeting the slot in his career. Crowder is the slot receiver so Smith will eventually find an element of comfort in Crowder leading to better production. Crowder could probably be had for close to nothing so you can swap him for a player you probably don’t mind parting ways with. In return, you are getting a player who has 60-70 catch potential and as a plus, his bye week is Week 4 so he could be a valuable asset down the road.

People are scared of how bad the Cardinals offense is right now. Great reason to try to lowball someone for Larry Fitzgerald. For some reason head coach Steve Wilks has not decided to go to Josh Rosen yet as the starting quarterback and I think once that happens it will be too late to get Fitz on the low. Fitzgerald is also dealing with a hamstring injury so people could be benching him for the next few weeks until they see an uptick in production from the Cardinals offense. In Week 2, Fitzgerald only had three receptions for 28 yards against the Rams, which is to be expected (sort of), but take advantage of the emotions running through the Fitz owner who started him in Week 2. When Rosen becomes the starter he will bring a spark and confidence to the offense that will keep Larry as a WR2 for the rest of the season. Fitzgerald has three consecutive 100 catch, 1,000-yard seasons. He is as dependable as they come and a great player to have on your roster, even if you are buying him to be your Flex.

Stills got off to a raging start in Week 1 scoring 25 half-PPR points. Week 2 hurt his stock, but the minimal production last week was all due to game script. The Dolphins enjoyed great field position all game and rarely needed to take a shot deep. Stills is the number one wideout in Miami, possibly even when DeVante Parker returns. Parker is rumored to be on the trade block and seems to have a sketchy relationship with head coach Adam Gase. If Parker is out of the picture, Stills is without a doubt the best option in Miami. A clear path to opportunity holds great trade value on the surface, but Stills fits the sell high profile because he has big-play ability (Four catches, 106 yards, and two touchdowns in week 1), but he is unreliable from week to week. He is attractive to someone who desperately needs a spark, but the headache of his sporadic production is not something worth dealing with if you can get something more reliable in return. As a bonus, Stills plays New England, Minnesota and Jacksonville weeks 14, 15 and 16 during most league’s fantasy playoffs so you wouldn’t use him anyway.

P.S. I traded away Stills in one league for Giovani Bernard because I am desperate for a running back right now and he was my 5th best receiver.

The undrafted free agent from the University of Colorado is third in rushing yards through two games. Expected to be a change of pace back heading into the season, Phillip Lindsay has taken the NFL by storm. Playing ahead of fellow rookie Royce Freeman right now, Lindsay is a sell-high candidate because his role going forward is uncertain even though his production thus far is phenomenal. Denver has stated they will use a “hot hand” approach at running back, which is never a good thing to hear as a fantasy owner. Given the shallow running back market, Lindsay is attractive trade bait, because it is possible he drops off significantly at any point in the year. At only 5’8” and 165 lbs. he could get banged up at some point with how much he runs up the middle. He is not as involved in the passing game as one would expect based on his size and elusiveness, with only three receptions through two weeks. With Royce Freeman, the apparent goal-line back also in the picture, Lindsay could be limited going forward so sell him for his inflated value before it drops along with his production.

Thanks for reading. These are just some of the players that you can involve in trades that can help improve your roster for the long-term. Keep informed and prepared because the landscape of fantasy football changes every single week. Best of luck this week and in your pursuit of a championship.